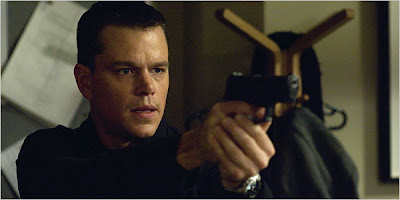 iF Magazine reported last week that Doug Liman, director of The Bourne Identity (2002) and producer of its two sequels, has confirmed that a fourth movie is in development — and he says it may be made with or without Matt Damon:

However, could Liman see the series going on without Damon, a la the Bond franchise?

One, Damon made Bourne a star in the first place, so it is by no means clear that Bourne could carry on without him. Remember how Sean Connery left the Bond franchise after five movies, only to be replaced by George Lazenby, after which the producers begged Connery to come back, before ultimately moving on to Roger Moore? It took the Bond franchise a while to find its footing, after Connery’s initial departure, and it could easily take the Bourne franchise a while to do so, too — especially since it is not at all clear where the franchise could go from here, given that the third film essentially undid the whole premise of the series.

Two, the Bond films — especially the early ones — were based fairly closely on a very popular, and rather long, series of novels and short stories, whereas the Bourne films, as I understand it, have basically ignored the books from the get-go and have used little of them beyond the titles and a few basic ideas. So Bond has always had a separate fanbase, quite apart from the movies, and whenever the movie franchise has tried to regenerate itself, it has done so by reaching out to that fanbase and stressing its renewed faithfulness to Ian Fleming’s original stories. The Bourne franchise wouldn’t have those options: there are only three books, the fanbase is not as big, and the movies have strayed so far from their source material that there is probably no way they could make a point of being faithful to the books now even if they wanted to.

July 30, 2008 Rosenbaum on DeMille's Commandments
Recent Comments
1 Comment | Leave a Comment
Browse Our Archives
get the latest updates from
FilmChat
and the Patheos
Entertainment
Channel
POPULAR AT PATHEOS Entertainment
1