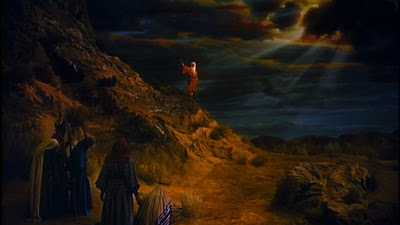 Jonathan Rosenbaum has just posted a review of Cecil B. DeMille’s The Ten Commandments (1956) that he wrote for the Chicago Reader when the film was re-issued way back in 1990. Very interesting stuff. I would quibble with a few of his statements of fact and at least one of his more minor interpretations — I do think, in fact, that the film inclines us to believe that Joshua and Lilia get together in the end — but the broader contours of his argument seem sound to me. I especially like his points about the changing nature of special effects over the past half-century, and how parts of the film are even, in some ways, anti-spectacle.

July 31, 2008 Newsbites: Xenophon! Nefertiti! Joan! Jesus!
Recent Comments
0 | Leave a Comment
""AD" stands for "Anno Domini", a Latin expression meaning "In the Year of Our Lord".So ..."
Peter T Chattaway The Chosen — season one, episode ..."
"Why does it say at the start of episode 3 that it takes place 26 ..."
Desiree Chamberlain The Chosen — season one, episode ..."
"What about Hellboy, The Grudge, Ghoulies, and Anaconda?"
45th Spiderbob Group VGCP When R-rated franchises go PG-13 …
"Not yet, but I might do something like that once Season 2 is complete."
Peter T Chattaway The Chosen — season one scripture ..."
Browse Our Archives
get the latest updates from
FilmChat
and the Patheos
Entertainment
Channel
Related posts from FilmChat