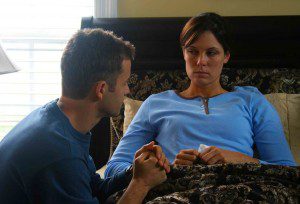 Two years ago, there was a big controversy when Facing the Giants, an ultra-low-budget movie produced by a church in the Bible Belt, was rated PG, allegedly for its spiritual content. Pundits and politicians railed against the MPAA and its ratings board for its perceived bias against religious themes, and moviegoers rallied to the film’s defense at the box office, making it one of the most successful Christian movies of all time. But as the debate over the movie’s rating subsided, another controversy emerged. Some Christians praised the film for its positive, family-friendly values, while others condemned it as bad art, a bad story badly told that would only encourage the worst artistic instincts of the evangelicals who saw it.

Personally, I came down somewhere in the middle of that debate. Yes, the script, by director Alex Kendrick and his brother Stephen — both of whom are pastors at Sherwood Baptist Church in Albany, Georgia — had a tendency to pile on the happy endings, to make rededicating one’s life to Jesus look like the magic trick that would solve all of life’s problems. But I have acted in church drama groups, and in at least one video sponsored by my denomination at that time, and I have a sense of how hard it can be to get even mediocre work out of a mostly-volunteer, non-professional cast and crew. Seen in that context, the Kendricks’ film was remarkably impressive, and instead of slamming it, I wanted to encourage their artistic growth.

Thankfully, their newest film, Fireproof, is indeed a step up, though it presents new challenges that the Kendricks’ earlier films never quite had to deal with. The story this time concerns a firefighter named Caleb Holt (Kirk Cameron) whose wife of seven years, Catherine (Erin Bethea), wants a divorce. Caleb is ready to give up on the marriage altogether, but his father, John (Harris Malcom), gives him a book called The Love Dare and challenges him to follow its steps before throwing in the towel. Since Fireproof has been endorsed by a plethora of marriage ministries, you can pretty much guess how things will turn out. But the Kendricks earn their resolution this time; instead of dropping miracles and messages from God on their characters, they keep the story focused on the Holts and driven by the choices that the Holts make. Put simply, it no longer feels like the filmmakers are “cheating.”

Which is not to say that the script is free of problems. The first half-hour or so feels uneven, like the filmmakers were trying to find the right tone, or weren’t quite sure how to set up the story. The first time we see Catherine, a hospital administrator, she’s talking to some nurses and she begins every other sentence with “Hey” as if to itemize the various plot points she’s laying out. When Catherine has a brief exchange with a doctor who seems a little too interested in what she has to say, the nurses cast each other knowing looks. And just in case we missed the point, as soon as Catherine is out of earshot, one of the nurses tells the others, “If I didn’t know any better, I’d say the doctor has a thing for Cat.” Subtle, this scene isn’t.

Then there are the arguments that Caleb and Catherine have at home. These scenes are necessary, of course, because without them, we don’t understand why their marriage is on the verge of collapse, or what hurdles Caleb will have to overcome in order to win his wife’s love back. But when Caleb finally blows up at Catherine — his explosive anger being the thing that finally pushes her to seek a divorce — the outburst is completely out of proportion to what has come before. Yes, arguments have a way of escalating, but nothing we see of Caleb before or after that scene seems to suggest he has that sort of rage coiled up inside him. Instead of seeing a character, we see an actor playing one scene differently from all the others.

Once the set-up is out of the way, however, the film settles into a nice mix of moral lessons and crowd-pleasing comic relief, sometimes in the very same scene. The Kendricks are not above poking fun at the Dr. Phil-isms that come up in the dialogue every now and then, and they get some amusing mileage out of the various scenes in which Caleb and Catherine commiserate with their respective buddies. In one amusing running gag, Caleb repeatedly, and embarrassingly, vents his frustrations outside the house where his neighbor can see him. And, on a more trivial level, the film lightens things up once in a while by showing what life is like at the firehouse, where the firefighters taunt and tease each other like college dorm-mates.

Fireproof also includes a couple of action sequences, as befits a film about firemen — a car is stuck on a railroad track, a child is trapped inside a burning house — and while there is nothing particularly ground-breaking about these scenes, they do show a certain amount of creativity. You just know a train is going to come bearing down on the car, for example, but you may be surprised by just how close a call it is.

The biggest drawback in these sequences, alas, is the actors who play the victims or innocent bystanders; their crying for help never quite registers as genuine peril. But this is to be expected in a film made by volunteers — or, if you will, by “amateurs,” in the positive sense of people who love what they’re doing without necessarily being professionals. Kirk Cameron, of course, is a Hollywood veteran, and Erin Bethea, who plays his wife, was a theater major at university a few years ago. (She’s also the daughter of Sherwood senior pastor Michael Catt.) But most if not all of the other performers are just regular churchgoers taking part in what amounts to a church drama writ large, so perhaps some allowances can be made there.

Like most Christian films, Fireproof includes a scene in which the protagonist makes a decision for Christ, but one of the things I like about the Kendricks’ films — including not only Fireproof and Facing the Giants but also their first film, Flywheel — is that this moment usually comes about halfway through the story, instead of at the end, which is where it normally happens in Billy Graham and Left Behind movies. Where those other films treat first-time commitments and rededications to Christ as the climax to the story, like the wedding at the end of a fairy tale, the Kendricks show these moments of decision to be true turning points; the person who lived one way at the beginning of the film learns how to live another way by the end.

However, in Fireproof, it is not quite clear how essential Caleb’s conversion is to his efforts to save his marriage. Flywheel and Facing the Giants concerned men who already had some sort of connection to a church community, but Caleb only has his parents and a friend or two for spiritual support. The Kendricks have said that Caleb needs to know Christ if he is to love his wife as Christ loved the church — but by that same token, shouldn’t he also be involved in an actual church? What if someone were to follow the steps outlined in The Love Dare without being a Christian? While the film works well enough as an extension of Sherwood Baptist’s marriage ministry, it is hard to escape the feeling that the evangelistic element has been tacked on.

But let’s not quibble too much. They say an audience will forgive a movie’s flaws if it gives them a solid ending, and Fireproof definitely has that. After a shaky start and a steady middle, the film ends on a genuinely moving note that didn’t quite have me in tears, but still got me where it counts, both times I saw the film. With this, the folks at Sherwood Baptist Church have made their most impressive movie yet.

2. What does it mean to love your spouse as Christ loved the church? Can you do this if you are not a Christian, or not a member of a church? Why or why not?

3. What about the high divorce rate among Christians? How do you think this film might have been different if the characters had been Christian all along?

4. Does the film say anything about gender roles in a marriage? Must it always be the husband who takes the initiative to save a marriage? Why or why not?

September 27, 2008 Fireproof -- the review's up!
Recent Comments
0 | Leave a Comment
"Mark 3:21, 31: "When his family heard about this, they went to take charge of ..."
Peter T Chattaway The Chosen starts shooting its second ..."
"Where do you get the idea that Jesus' mother and brothers were there to intervene ..."
tmirus The Chosen starts shooting its second ..."
"This was a refreshing read. I'm an average fan of Hellboy but I'm also a ..."
Andrew Mathews Doug Jones on Hellboy and Christianity.
"Great interview! One thing I've wondered since watching Season 1 is why they didn't include ..."
A.J. Cattapan Interview: The Chosen writer-director Dallas Jenkins ..."
Browse Our Archives
get the latest from
FilmChat
Sign up for our newsletter
POPULAR AT PATHEOS Entertainment
1

Bible movies in the works
Cranach
4