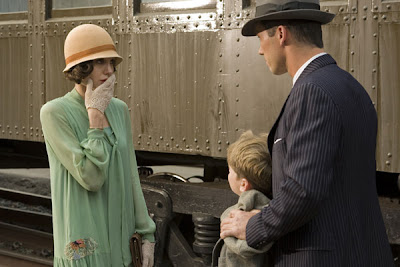 Many years ago, George C. Scott starred in a horror movie called The Changeling (1980). It was made in Vancouver, and, as I recall, a kid I knew at school at the time claimed that it had been filmed not far from where he lived.

Changeling takes place almost entirely in Los Angeles in 1928, and like many historical movies these days, it uses special effects to make the city where it is set look the way that it did many years ago. But there is one brief scene that takes place in Vancouver — and it, too, begins with an establishing shot that appears to show this city the way it might have looked 80 years ago.

I am very curious to see whether these, uh, urban flashback shots will be discussed in any way on the inevitable DVD — especially since at least one of the companies that worked on the effects appears to be based in Vancouver. That establishing shot of my city just might have been made by people who would have had a keener interest than usual in making sure it turned out right.

As for the film itself, I have little to say beyond the fact that I think it is okay, and not as good or awful as a number of critics have suggested. I am inclined to cut films like this a fair bit of slack, since I am always intrigued by movies that open my eyes to true stories that I had never heard before — but the storytelling in this case has a number of problems. The movie seems to hop from one genre to another, without finding its footing in any of them, and it never quite sells you on the truth of the story it’s telling.

For more info on the relationship between truth and movie in this case, check out the following sites:

Larry Harnisch of the Los Angeles Times has amassed an impressive collection of clippings and file photos, and he also goes through census records and the like to track down, via Google Maps, the places where Christine Collins (the woman played by Jolie) lived, both before and after her son was kidnapped.

Lou Lumenick of the New York Post speaks to screenwriter J. Michael Straczynski, who reveals that the original script had a subplot about Collins’ husband, who was in jail at the time of the kidnapping, that was cut from the film altogether.

And, in the clip below, Marcia Nasatir of the ‘Reel Geezers’ movie-reviewing duo notes that the movie might have been more interesting if it had not omitted the fact that the serial killer who was ultimately accused of kidnapping Collins’ son had been living with his own mother at the time of the kidnappings:

Click here if the video file above doesn’t play properly.

November 12, 2008 Newsbites: Australia! McPhee! Narnia! Monopoly! Magneto!
Recent Comments
2 Comments | Leave a Comment
Browse Our Archives
get the latest from
FilmChat
Sign up for our newsletter
POPULAR AT PATHEOS Entertainment
1