Herod the Great and his Cleopatra cameo. 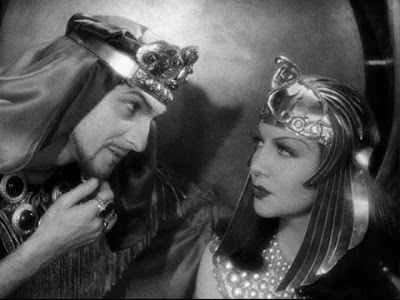 I happened to watch Cecil B. DeMille’s Cleopatra (1934) for the first time today, and I was surprised when, a little more than an hour into the movie, Herod the Great showed up. He says that he has come directly from Rome, and that he is on his way back to his kingdom in Judea, but while he is in Egypt, he has a message for Cleopatra: namely, Octavian wants her to kill Mark Antony.

In the next scene, Herod and Mark Antony share some drinks and some laughs, and then Herod, still laughing, tells Antony that Octavian wants Cleopatra to poison him — a message that Antony himself laughs off, until a later scene in which he discovers that Cleopatra is testing different kinds of poison on her prisoners.

I have no idea whether there is any historical basis for these particular scenes. But for what it’s worth, Wikipedia indicates that Herod secured his position as “King of the Jews” with help from both Mark Antony and Cleopatra between 40 and 37 BC, and that, when civil war broke out between Antony and Octavian, Herod switched his allegiance to Octavian in 31 BC. Antony and Cleopatra would go on to die in 30 BC, after losing their war with Octavian, while Herod continued to rule Judea until his own death in 4 BC. Octavian, who went on to become the Emperor Augustus, did not die until AD 14.

The Herod cameo in this film is particularly interesting for two reasons: One, I am not aware of any other Cleopatra movie that has included Herod as one of its characters. And two, both Herod and director DeMille are often associated with biblical epics, yet this is the only DeMille film that depicts Herod — and it is not, strictly speaking, a biblical epic! Even DeMille’s one life-of-Jesus movie, The King of Kings (1927), never gets around to depicting Herod the Great, because it focuses exclusively on Jesus’ adult ministry and never depicts the Nativity.

Herod, incidentally, is played here by Joseph Schildkraut, who had previously played Judas Iscariot in The King of Kings. Cleopatra, of course, is played by Claudette Colbert, who had previously bathed in asses’ milk as the Roman Empress Poppea in DeMille’s The Sign of the Cross (1932) — and who would soon go on to win an Oscar for starring opposite Clark Gable in the classic screwball comedy It Happened One Night (1934).

December 6, 2008 Jesus Christ Airlines -- the Biafra airlift movie
Recent Comments
5 Comments | Leave a Comment
""AD" stands for "Anno Domini", a Latin expression meaning "In the Year of Our Lord".So ..."
Peter T Chattaway The Chosen — season one, episode ..."
"Why does it say at the start of episode 3 that it takes place 26 ..."
Desiree Chamberlain The Chosen — season one, episode ..."
"What about Hellboy, The Grudge, Ghoulies, and Anaconda?"
45th Spiderbob Group VGCP When R-rated franchises go PG-13 …
"Not yet, but I might do something like that once Season 2 is complete."
Peter T Chattaway The Chosen — season one scripture ..."
Browse Our Archives
get the latest updates from
FilmChat
and the Patheos
Entertainment
Channel
POPULAR AT PATHEOS Entertainment
1