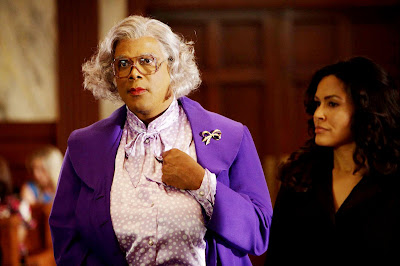 Tyler Perry, whose newest film Madea Goes to Jail opens tomorrow, hopes to take his brand global in the near future, and he hopes to disprove the widespread belief that African-American movies just don’t do all that well overseas. So says the Hollywood Reporter in a lengthy, three-page article, at any rate.

Best wishes to Perry, but if Canada is anything to go by, finding an audience outside the United States may be something of an uphill struggle; after releasing his first few films more or less nationwide, the distributor here hasn’t even bothered to release the last few movies outside of a few cities in Ontario and the Maritimes, i.e. places with a relatively strong black population.

According to CinemaClock.com, the trend will continue with Madea Goes to Jail, which is playing in only two Canadian cities — or five, if you count Toronto suburbs Brampton, Burlington and Mississauga as separate cities — compared to “1369 cities across the U.S.A.”

Compounding matters is the fact that Perry’s movies often have a pronounced faith element, and films that treat Christian themes explicitly tend to do proportionately less well overseas than they do in the United States.

February 19, 2009 The Big Fisherman -- a "lost" biblical epic
Recent Comments
2 Comments | Leave a Comment
"I have neither noticed that much. I recenty read a leadership book inspired from Cyrus ..."
Hamid Mortazavi Cyrus the Great — a Persian ..."
""AD" stands for "Anno Domini", a Latin expression meaning "In the Year of Our Lord".So ..."
Peter T Chattaway The Chosen — season one, episode ..."
"Why does it say at the start of episode 3 that it takes place 26 ..."
Desiree Chamberlain The Chosen — season one, episode ..."
"What about Hellboy, The Grudge, Ghoulies, and Anaconda?"
45th Spiderbob Group VGCP When R-rated franchises go PG-13 …
Browse Our Archives
get the latest updates from
FilmChat
and the Patheos
Entertainment
Channel
POPULAR AT PATHEOS Entertainment
1