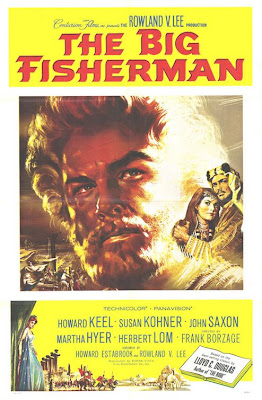 Jerry Beck posted an item at Cartoon Brew yesterday expressing his curiosity about a neglected period in the history of the Disney studio, and in doing so, he reminded me of a Bible epic that I have long been interested in but am pretty much resigned to never seeing.

The period in question is the late 1950s: Walt Disney, whose films had been distributed by RKO throughout the 1930s and 1940s, finally decided to distribute his films himself through a brand-new company he created called Buena Vista. But he didn’t have enough material of his own, yet, to keep the people at Buena Vista busy year-round, so he agreed to distribute a handful of movies that were (co-)produced by outside companies.

One of these movies was The Big Fisherman (1959), which was based on a book by Lloyd C. Douglas, whose similarly biblical novel The Robe had been turned into a very successful movie over at 20th Century Fox just a few years earlier. The Robe (1953) had featured Michael “Klaatu” Rennie in a small role as the apostle Peter, but The Big Fisherman put Peter centre stage, and the actor playing him was Howard Keel, who had specialized in musicals like Annie Get Your Gun (1950), Kiss Me Kate (1953) and Seven Brides for Seven Brothers (1954) but was apparently open to doing non-musical roles too.

The film was produced at the height of the Bible-epic genre, and it came out the same year as Ben-Hur, which went on to set the record for the most Oscar wins by any movie ever — a record that has been equalled in recent years but never surpassed. The Big Fisherman itself, however, was a complete flop, and it is not clear to me whether the studio even bothered to distribute it beyond a handful of cities.

The film has remained in obscurity ever since, and that’s a shame, since a brief look at the movie’s IMDb page suggests that it may have tackled an aspect of biblical and secular history that has often been overlooked by films in this genre.

The listed characters there include not only Herod Antipas and his wife Herodias, but also Herod Philip (a character who is sometimes mentioned, but almost never seen, in movies of this sort) and King Aretas of the Nabateans (a character who is normally never even mentioned in these movies).

This is significant because both Antipas and Herodias were married to other people before they married each other, and their relationship had some fairly major repercussions. Herodias had been married to Philip, who was Antipas’s brother, while Antipas had been married to the daughter of Aretas. The New Testament tells us that John the Baptist (who is also in this movie) vigorously opposed Herodias’s abandonment of one brother for the other, and that John was imprisoned and eventually executed for opposing this infidelity. The secular historian Josephus, meanwhile, tells us that Aretas became an enemy of Antipas’s after Antipas rejected Aretas’s daughter, and that, when Aretas defeated Antipas in battle some time later, many Jews took this as a sign that God was punishing Antipas for killing John the Baptist.

I have no idea how deeply the film gets into any of these issues, nor do I have any idea whether the film ever rises above Hollywood soap operatics in dealing with these issues. But just the possibility of seeing biblical and secular history linked like this in a dramatic movie is kind of exciting, to me, and even if it is done badly, I would very much like to see it for myself.

Aretas is never mentioned by name in the gospels, but he is mentioned in the New Testament: in one of his letters to the Corinthians, Paul says he fled Damascus because one of Aretas’s governors was planning to arrest him. (This detail is omitted in the Acts version of Paul’s escape from Damascus.)

Also, the part of Herod Antipas is played in this movie by Herbert Lom. Best known now for playing Chief Inspector Dreyfus in seven Pink Panther movies between 1964 and 1993, Lom would later play Barnabas opposite Anthony Hopkins’ Paul in the 1981 TV-movie Peter and Paul.

February 19, 2009
Can Tyler Perry sell his movies overseas?
Next Post

February 20, 2009 Will the original Sarah Connor "be back"?
Recent Comments
2 Comments | Leave a Comment
"I have neither noticed that much. I recenty read a leadership book inspired from Cyrus ..."
Hamid Mortazavi Cyrus the Great — a Persian ..."
""AD" stands for "Anno Domini", a Latin expression meaning "In the Year of Our Lord".So ..."
Peter T Chattaway The Chosen — season one, episode ..."
"Why does it say at the start of episode 3 that it takes place 26 ..."
Desiree Chamberlain The Chosen — season one, episode ..."
"What about Hellboy, The Grudge, Ghoulies, and Anaconda?"
45th Spiderbob Group VGCP When R-rated franchises go PG-13 …
Browse Our Archives
get the latest updates from
FilmChat
and the Patheos
Entertainment
Channel
POPULAR AT PATHEOS Entertainment
1