Will the original Sarah Connor “be back”?

Will the original Sarah Connor “be back”? February 20, 2009 Peter T. Chattaway 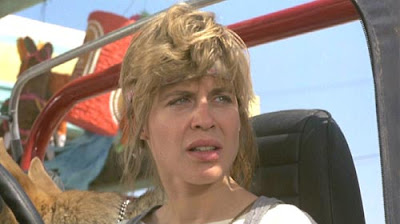 Six months ago, it was rumoured that there might be a part in Terminator: Salvation for Linda Hamilton, the actress who played Sarah Connor in the first two Terminator movies. That turned out to be false, at the time, but now Hamilton herself has told the MTV Movies Blog that she is in “active negotiations” to do some voice-over work for the new film, which opens in three months.

If she does take the part, that would be interesting, as her character died between the second and third films. Also, while Sarah Connor provided the voice-over in Terminator 2: Judgment Day (1991), her son John has been doing the voice-over work ever since, at least on the big screen, both in Terminator 3: Rise of the Machines (2003) and in the trailers for the new film.

So, will John be doing any voice-overs within the new film itself? Will both the deceased Sarah and the very alive John be sharing the narrating duties? And if they do share the voice-over chores, will their voices work together or will there be some sort of tension between them and their possibly differing perspectives on the story? (Recall how, in both the teaser and the trailer, John has said, “This is not the future my mother warned me about…”)

Meanwhile, in related news, things are apparently not looking very good for The Sarah Connor Chronicles, ratings-wise. Variety says the show “opened meekly” when it moved to Friday nights last week as a lead-in to Joss Whedon’s Dollhouse.

February 20, 2009 Random thought of the day.
Recent Comments
0 | Leave a Comment
"I have neither noticed that much. I recenty read a leadership book inspired from Cyrus ..."
Hamid Mortazavi Cyrus the Great — a Persian ..."
""AD" stands for "Anno Domini", a Latin expression meaning "In the Year of Our Lord".So ..."
Peter T Chattaway The Chosen — season one, episode ..."
"Why does it say at the start of episode 3 that it takes place 26 ..."
Desiree Chamberlain The Chosen — season one, episode ..."
"What about Hellboy, The Grudge, Ghoulies, and Anaconda?"
45th Spiderbob Group VGCP When R-rated franchises go PG-13 …
Browse Our Archives
get the latest updates from
FilmChat
and the Patheos
Entertainment
Channel
POPULAR AT PATHEOS Entertainment
1