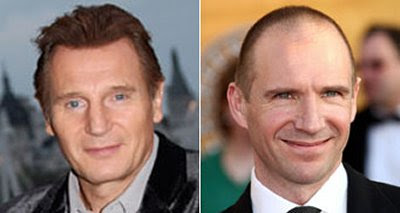 Schindler’s List (1993) made Liam Neeson a star and introduced the world to Ralph Fiennes. Now, according to the Hollywood Reporter, the two actors will reunite, in a manner of speaking, for Louis Leterrier’s remake of Clash of the Titans (1981). Neeson, who has spent the past few years providing the voice of Aslan in the Narnia movies, will play Zeus, king of the gods; while Fiennes, who has spent the past few years playing the evil Lord Voldemort in the Harry Potter movies, will play Hades, the “ruler of the underworld who aims to overtake Zeus and rule over all.” Zeus was played in the original film by Laurence Olivier, but the part of Hades is new to the remake, which can probably be taken as a sign of just how different this new film will be from its predecessor.

April 7, 2009
Newsbites: The quasi-biblical (or not) edition!
Next Post

April 9, 2009 Year One gets a PG-13 rating after all.
Recent Comments
0 | Leave a Comment
"I have neither noticed that much. I recenty read a leadership book inspired from Cyrus ..."
Hamid Mortazavi Cyrus the Great — a Persian ..."
""AD" stands for "Anno Domini", a Latin expression meaning "In the Year of Our Lord".So ..."
Peter T Chattaway The Chosen — season one, episode ..."
"Why does it say at the start of episode 3 that it takes place 26 ..."
Desiree Chamberlain The Chosen — season one, episode ..."
"What about Hellboy, The Grudge, Ghoulies, and Anaconda?"
45th Spiderbob Group VGCP When R-rated franchises go PG-13 …
Browse Our Archives
get the latest updates from
FilmChat
and the Patheos
Entertainment
Channel
Related posts from FilmChat