Year One gets a PG-13 rating after all. 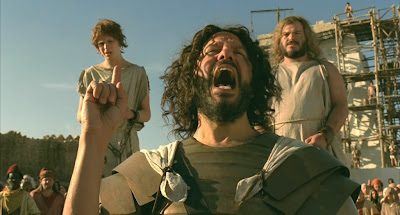 Year One was originally rated R in the United States for “some sexual content and language”. Producer Judd Apatow and writer-director Harold Ramis appealed the rating a few days ago, but to no avail.

Now, says the Hollywood Reporter, the quasi-biblical comedy has been re-cut and successfully re-rated PG-13, for “crude and sexual content throughout, brief strong language and comic violence”.

Note how the R-rated version only had “some” sexual content, according to the MPAA, whereas the PG-13 version — the one with less footage, and specifically less of the “adult” footage — has crude and sexual content “throughout”.

No doubt this reflects how extremely relative the ratings process is, and how each rating brings a different set of expectations to the movie: As R-rated movies go, this one was apparently kind of mild, but as PG-13 movies go, it’s right there on the edge.

Oh, and apparently “comic violence” doesn’t even bear mentioning in an R-rated film, but when it turns up in a PG-13 movie, it becomes the sort of thing that the MPAA figures parents might want to know about.

The deleted footage will no doubt see the light of day on DVD, of course.

April 9, 2009 Newsbites: The war movie edition!
Recent Comments
0 | Leave a Comment
""AD" stands for "Anno Domini", a Latin expression meaning "In the Year of Our Lord".So ..."
Peter T Chattaway The Chosen — season one, episode ..."
"Why does it say at the start of episode 3 that it takes place 26 ..."
Desiree Chamberlain The Chosen — season one, episode ..."
"What about Hellboy, The Grudge, Ghoulies, and Anaconda?"
45th Spiderbob Group VGCP When R-rated franchises go PG-13 …
"Not yet, but I might do something like that once Season 2 is complete."
Peter T Chattaway The Chosen — season one scripture ..."
Browse Our Archives
get the latest updates from
FilmChat
and the Patheos
Entertainment
Channel
POPULAR AT PATHEOS Entertainment
1