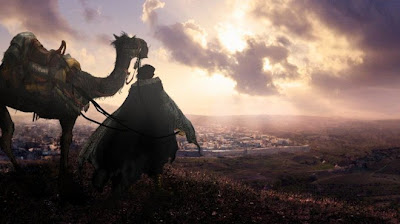 1. Paul Currie, an Australian filmmaker and co-founder of Lightstream Pictures, is planning to direct a 3D animated movie called The Fourth Wise Man. There seems to be very little information out there about this project, but it stands to reason that this film will somehow concern the Nativity; who knows, it may even be based on the Henry Van Dyke short story that has been made for TV a few times now, most notably in 1985 with Martin Sheen and Alan Arkin. — Variety

2. Spanish animation outfit Dygra Films has hired Madagascar writer Billy Frolick to work on the English-language version of Holy Night!, an upcoming cartoon that, if I have read the various sources correctly, seems to concern a clash between secular and religious Christmas decorations that takes place after Santa’s sleigh and the Baby Jesus go missing. — Variety

3. Graphic novelist Mark Millar says he’s had difficulty persuading a studio to make American Jesus, an irreverent comic-book adaptation that he describes as a “sequel” to The Passion of the Christ (2004) because it concerns the Second Coming:

“People were sniffing around ‘American Jesus’ and everybody wanted to do it, but they were really nervous about the subject matter,” continued Millar. “And genuinely, somebody [said] to me ‘Is there anyway we can do ‘American Jesus’, but maybe take Jesus out of it?'”

“I loved that,” laughed Millar. “It had to be the most brilliantly Hollywood thing I’ve ever heard [because] Jesus is in every scene in that book and its about the second coming. And they were saying ‘can we make it some kind of analogy of Jesus? Or maybe call him David?’ I was like ‘No, it’s got to be ‘American Jesus.” They said ‘ I just don’t know if anybody would go and see a movie with Jesus in it.’ And I [said] ‘Well, ‘The Passion’ made $650 million!'”

4. Not The Messiah: He’s A Very Naughty Boy, an oratorio based on Monty Python’s Life of Brian (1979), may be coming out on video in the near future; with any luck, it may get a limited theatrical release, too. I say this because it just received a PG rating “for suggestive material and language” from the MPAA. The original movie, incidentally, was rated R.

5. A couple of Jesus movies are being re-issued on DVD. Roger Young’s Jesus (1999; my review), starring Jeremy Sisto as Jesus and Gary Oldman as Pontius Pilate, was released this week, along with Raffaele Mertes’ Esther (1999; my review) — just a couple days late for Purim, but oh well. (Both films were originally produced as part of The Bible Collection.)

Meanwhile, Bruce Marchiano, who played Jesus in a couple of Visual Bible productions in the mid-1990s — and will do so again in the upcoming cartoon The Lion of Judah — has released a 15th anniversary edition of Matthew with new bonus features, including a two-disc audio book in which Marchiano describes the making of the movie from his point of view.

Incidentally, Marchiano is currently soliciting donations to support the making of a new word-for-word adaptation of John’s gospel called Jesus … No Greater Love. I was reminded of that recently when I came across this interview with Kevin Smith in which he says he thought about letting his fans put up the money for one of his movies, too:

We got some lawyers to look at it, and it’s a f*****g nightmare to accept donations to make a movie. A tax nightmare, it sounded so good in theory. And we were like, ‘A people’s studio!’ And a people’s studio could work, but you can’t get money from the people, it has to start with this nut, and then work from there.

I wonder what Marchiano’s lawyers would say? Maybe the rules are different if the film can be classified as a non-profit ministry tool, rather than as something made to sell tickets.