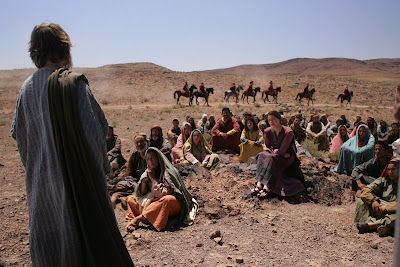 Remember that new version of Ben-Hur that was being produced as a four-hour mini-series? I last mentioned it here almost a year ago, but since then I hadn’t heard much about it. Now, however, Matt Page and a few of his readers have discovered that the CBC is showing the first part of the mini-series this Sunday at 8:00pm (or 8:30pm in Newfoundland). As far as Matt can tell, the mini-series hasn’t been shown or scheduled in any other country (though a trailer that was apparently shown on Spanish TV can still be seen here), so the Canadian broadcast could be a world premiere.

April 1, 2010 Ben-Hur mini-series -- the actors speak!
Recent Comments
1 Comment | Leave a Comment
"I have neither noticed that much. I recenty read a leadership book inspired from Cyrus ..."
Hamid Mortazavi Cyrus the Great — a Persian ..."
""AD" stands for "Anno Domini", a Latin expression meaning "In the Year of Our Lord".So ..."
Peter T Chattaway The Chosen — season one, episode ..."
"Why does it say at the start of episode 3 that it takes place 26 ..."
Desiree Chamberlain The Chosen — season one, episode ..."
"What about Hellboy, The Grudge, Ghoulies, and Anaconda?"
45th Spiderbob Group VGCP When R-rated franchises go PG-13 …
Browse Our Archives
get the latest updates from
FilmChat
and the Patheos
Entertainment
Channel
Related posts from FilmChat