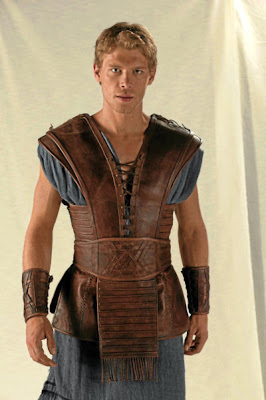 I was beginning to wonder why I hadn’t seen any local coverage of the new mini-series version of Ben-Hur, the first part of which premieres this Sunday on CBC. But then a couple of interviews popped up in my news feed.

The first, from the Globe and Mail, revolves around Joseph Morgan, who plays the title character — and in his intro, writer R.M. Vaughan describes the mini-series by saying that it

Oh-kay. The interview itself is fairly quick and superficial, but it does include one noteworthy aside about the possible religious implications of this new adaptation of Lew Wallace’s story:

Is Judah Ben-Hur a Jewish hero, or an early-adaptor Christian?

That’s interesting. I think he undergoes a change. In our version, the reason why he forgives [his enemy] Messala, and understands forgiveness, is because of Jesus Christ. So I guess you could say he is maybe a Jew turned Christian, in the space of the story.

It will be interesting to see how that last bit plays out. The two major big-screen versions of Ben-Hur have also made Jesus a key part of Judah’s enlightenment, so to speak, but they have differed on what sort of influence, exactly, Jesus had on him. The 1925 version (which also had a bit of nudity, for whatever that’s worth) ultimately emphasized Judah’s religious belief, but the 1959 version made him more of a humanist or pacifist in the end than a Christian, per se. (For more on this topic, see my review of the four-disc DVD set that came out five years ago.)

It is also interesting to hear Morgan say that Judah “forgives” Messala, and not just the Romans in general, in the end — since I’m not sure that that’s quite what happens in the existing films. Will the mini-series place a greater emphasis on reconciliation than the other adaptations did? We shall see.

In the meantime, the Canadian Press has an interview of its own with Emily VanCamp, who plays Judah’s wife Esther — though she doesn’t say a whole lot about the mini-series itself. Instead, she talks about her career in general and how hot it was to shoot Ben Hur in Morocco and various other things of that nature.

April 2, 2010 Does Junior always know best?
Recent Comments
1 Comment | Leave a Comment
""AD" stands for "Anno Domini", a Latin expression meaning "In the Year of Our Lord".So ..."
Peter T Chattaway The Chosen — season one, episode ..."
"Why does it say at the start of episode 3 that it takes place 26 ..."
Desiree Chamberlain The Chosen — season one, episode ..."
"What about Hellboy, The Grudge, Ghoulies, and Anaconda?"
45th Spiderbob Group VGCP When R-rated franchises go PG-13 …
"Not yet, but I might do something like that once Season 2 is complete."
Peter T Chattaway The Chosen — season one scripture ..."
Browse Our Archives
get the latest updates from
FilmChat
and the Patheos
Entertainment
Channel
POPULAR AT PATHEOS Entertainment
1