Beings, beasts and machines ready for their close-ups 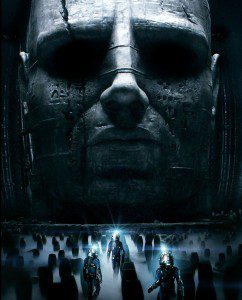 Like a lot of people, I made a point of watching Ridley Scott’s Alien (1979) again before his prequel Prometheus came out last month. One thing that struck me on this viewing was how frequently Scott uses close-ups of non-human faces, indeed of mere things. I had certainly noticed individual shots on previous viewings, but it was only during my latest encounter with the film that all these images began to jostle together in my mind, and that I began to realize how Scott was using them to further one of the film’s key elements, which is the recurrent blurring of the lines between human, animal and machine.

Consider these images, captured from the film:

First, the two helmets that happen to be sitting opposite the two computers that talk to each other; each computer’s screen is reflected in one of the helmets’ visors (and note, this is more or less how the film begins; at this point, all of the human characters are still in suspended animation):

Second, there is our final glimpse of the “space jockey”, as Dallas begins to walk away and the camera zooms in past his helmet to dwell on what looks like an alien skull, lost in shadow:

Third, there is the look on the cat’s face as it watches the adult alien kill the first of its victims; the human can be heard screaming off-screen, but the cat’s face remains passive, more or less:

Fourth, there is the head of Ash, the android, after it has been knocked clear off his shoulders; there are two shots from this angle, the second of which takes place after the rest of the body has begun lunging at the humans again (so there is an interesting contrast between the lifelessness of the face and the animation, as it were, of the body):

Fifth, there is our last look at Ash a scene or two later, as the flames burn off his skin to reveal the mannequin-like face mold beneath:

And sixth, there is, of course the Xenomorph itself, the face of which is virtually featureless save for its two-stage mouth; there are many shots I could have picked for this creature, of course, but I like this one because it shows the alien contemplating the cat:

And after all we’ve seen in these other close-ups, how does the movie end? With a close-up of Ripley’s face in suspended animation:

I don’t want to say too much about where I think this might be going, partly because I’m still mulling it over myself. But I think it’s instructive that screenwriter Dan O’Bannon said he changed the screenplay’s title from “Star Beast” to “Alien” partly because the word “alien” works as both a noun and an adjective. It’s a word that can be applied to something other than extra-terrestrials; it’s a word that can be applied to those things around us that are animal or machine, and are thus different from us, but it can also be applied to those parts of us that feel strange and “other” precisely because they are not animal or machine, or maybe even because they are.

I think it’s especially interesting, then, that the “space jockey” shot above is a zoom shot, and not a static shot like most of the others. It is almost as though Ridley Scott was trying to draw our attention to the “space jockey” in a way that suggests there is something extra important here — something that might give us a key to understanding what the movie is all about.

And if part of the point of the film is the blurring of lines between being, beast and machine, then the “space jockey”, as conceptualized here, is of course the most blurred entity in the entire film. As the pilot, apparently, of a doomed spaceship, it was presumably an intelligent being of some sort; but its appearance is like that of a beast, rather than anything we might recognize as human; and its body seems to grow out of the spaceship, so that it is not clear where organism ends and mechanism begins.

Alas, as those who have seen Prometheus know, Ridley Scott pretty much abandons everything the “space jockey” stood for in his prequel. In the new continuity, the “space jockeys” are actually just tall humanoids wearing a very peculiar kind of spacesuit, and it is fairly easy to separate the suits from the beings who wear them.

I’ll have more to say about that later. But in the meantime, are there any significant close-ups in Prometheus? Not really. There are one or two wide shots of giant face-statues, such as the one that appears at the top of this post, that look like close-ups (which reminds me of an old Jim Emerson post on Hitchcock’s use of Mount Rushmore in North by Northwest, incidentally). But apart from a rather silly scene in which a few people try to re-animate a 2,000-year-old decapitated head, nothing comes to mind.

July 3, 2012 Long-gestating Nativity films still slouching towards Bethlehem
Recent Comments
2 Comments | Leave a Comment
Browse Our Archives
get the latest from
FilmChat
Sign up for our newsletter
POPULAR AT PATHEOS Entertainment
1