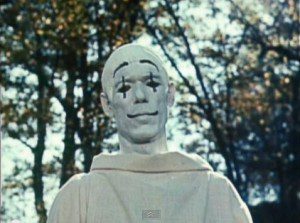 My friend Darrel Manson reminds me that the National Film Registry announced a few weeks ago that it will add another 25 films to its archives — and that one of the films chosen for preservation this time ’round is the 1964 short film Parable, which featured a clown as a sort of Christ-figure nearly a decade before Godspell (1973).

The National Film Registry indicates that it chose the film partly because it represents a much larger and older tradition of Protestant non-theatrical films, and partly because this particular film, which was produced for the New York World’s Fair, was somewhat controversial and thus historically significant. Here is the Registry’s blurb on the film:

In the 1930s, a number of Protestant groups, concerned about the perceived meretricious effects of Hollywood films, began producing non-theatrical motion pictures to spread the gospel of Jesus. “Parable” followed a filmmaking tradition that has not very often been recognized in general accounts of American film history. One of the most acclaimed and controversial films in this tradition, “Parable” debuted at the New York World’s Fair in May 1964 as the main attraction of the Protestant and Orthodox Center. Without aid of dialogue or subtitles, the film relies on music and an allegorical story that represents the “Circus as the World,” in the words of Rolf Forsberg, who wrote and co-directed the film with Tom Rook for the Protestant Council of New York. “Parable” depicts Jesus as an enigmatic, chalk-white, skull-capped circus clown who takes on the sufferings of oppressed workers, including women and minorities. The film generated controversy even before its initial screening. The fair’s president Robert Moses sought to have it withdrawn. Other fair organizers resigned with one exclaiming, “No one is going to make a clown out of my Jesus.” A disgruntled minister threatened to riddle the screen with shotgun holes if the film was shown. Undaunted, viewers voted overwhelmingly to keep the film running, and it became one of the fair’s most popular attractions. Newsweek proclaimed it “very probably the best film at the fair” and Time described it as “an art film that got religion.” The Fellini- and Bergman-inspired film received the 1966 Religious Film Award of the National Catholic Theatre Conference, along with honors at the 1966 Cannes, Venice and Edinburgh film festivals. It subsequently became a popular choice for screenings in both liberal and conservative churches.

The cinematic portrayal of Jesus as a clown was not without precedent. At the New York World’s Fair in the early 1960s, at the Protestant-Orthodox Pavilion, sponsored by the Protestant Council of New York, Rolf Forsberg’s brief twenty-two minute film Parable (1964) was projected. This film shows a white-faced, white-cloaked clown moving through the “great circus of life” as “a man who dared to be different,” according to the spoken prologue. The film itself did not have dialogue and was more an allegory than a parable.

Parable stirred up controversy in the New York City area, as reported in the national press. Two members of the pavilion’s steering committee resigned claiming that the portrayal of Jesus as a clown was sacrilegious. Some local clergy were offended by what were alleged to be the Buddhist leanings of Rolf Forsberg, the film’s writer and producer. Others noted that the film ended with a death but no resurrection. Even Robert Moses, the director of the World’s Fair itself, asked that the film be withdrawn; but the leaders of the Protestant Council resisted. The film became a popular attraction throughout the duration of the fair and circulated widely in church circles for years thereafter. The popularity of Parable probably helped prepare the public for an appearance of Jesus as a clown in Godspell.

The film does not seem to be available online anywhere, at least not that I can find, though someone has apparently seen fit to upload it to YouTube with an entirely different soundtrack here. You can, however, watch the following interview with director Rolf Forsberg and hear him discuss how the film was condemned by Christianity Today and others before it had even been completed:

January 11, 2013 Jurassic Park sequels: a tale of two reviews
Recent Comments
0 | Leave a Comment
"Animation would uniquely allow the creator to show the genitalia without getting into the waters ..."
Kellen The naked Christ in film: birth, ..."
"Gentlepersons:While I am a lifelong Christ-follower and served as Chaplain to a graduate program in ..."
Darrell A. Harris Exclusive: Patrick and Paul Aiello on ..."
"I know this is from 5 years ago, but I just got around to seeing ..."
digital bookworm Exclusive: Watch the trailer for Becoming ..."
"Thanks so much for making this list. I was thinking of doing something similar, but ..."
Bill Kudrle The Chosen — season one scripture ..."
Browse Our Archives
Related posts from FilmChat