Do Bible movies need to be “accurate” or “exciting”? 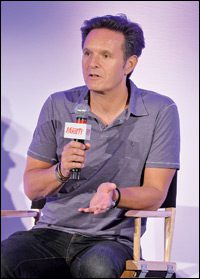 Last summer, Mark Burnett, producer of the upcoming mini-series The Bible, made a surprisingly candid remark at an event called the Family Entertainment and Faith-Based Summit. Speaking of his passion for the subject matter and emphasizing that The Bible was more to him than just another TV project (his other shows include Survivor and Are You Smarter than a 5th Grader?), he said: “I couldn’t give a shit about the business model. This was about love and faith.”

Needless to say, he hasn’t said anything quite that frank in the last few weeks, as he and his wife, co-producer Roma Downey, have made the rounds to promote the mini-series to religious groups. But I sometimes wish he would, just to shake things up a bit. Instead, we get utterly predictable interviews like the one that appeared on the Canadian TV show 100 Huntley Street last week (full disclosure: I worked at 100 Huntley Street for a month back in the summer of ’85).

I don’t necessarily blame Burnett himself for playing it so safe; presumably he knows the demographic to which he is pitching this project. Note, for example, how, at the 3:50 mark in the video below, one of the interviewers tells Burnett: “Here, finally, we have an adaptation of the scriptures that is biblically accurate.”

I don’t know what the interviewer means by “finally”; claims of “accuracy” are made all the time by the makers of Bible films and TV shows, and by the religious-community figures who are roped into promoting them. Indeed, I took issue with this tendency in one of my articles on Mel Gibson’s The Passion of the Christ (2004):

More interesting, to me, is the fact that Downey and Burnett talk (in the second part of the interview) about how they made the mini-series “exciting” to placate their teenaged sons, who didn’t want the mini-series to be “lame”. Inaccuracies, strictly speaking, are inevitable when adapting any work of literature into another format, but this emphasis on “excitement” raises interesting questions about the kinds of inaccuracies that have been introduced to this particular mini-series.

For example: Is this the sort of show that will encourage some measure of contemplation, or is it geared entirely towards a sort of sensationalism? Does it make sense to bring the same aesthetic approach to each and every Bible story, given that the Bible itself is a collection of texts written in different genres and different styles? Did the producers decide which bits of the Bible to film and which to leave out based on how “exciting” they could be? If so, is the mini-series as representative of the scriptures as a whole as it could (or should) be? And so on, and so on.

This particular talk-show clip is also interesting because it includes a bit from the mini-series that I hadn’t seen before (starting at the 5:50 mark), in which Jesus gives Peter a miraculous catch of fish and tells him he can be “a fisher of men”.

This clip is based on a passage from Luke 5, and the first and most obvious inaccuracy here is that there are only two men here, namely Jesus and Peter; the film does not include the “companions” who were with Peter in his boat, nor does it include James and John, the sons of Zebedee, who were fishing in the boat next to Peter’s. Every other filmed version of this miracle that I can recall has emphasized that Jesus worked this miracle in the presence of multiple fishermen, so this stripped-down version of the scene is not only inaccurate on a strictly biblical level, but it makes the mini-series look a little cheap, too, like they couldn’t afford to hire enough actors.

More importantly, however, the clip leaves out a crucial bit of biblical dialogue — in which Peter, awestruck by the miracle, tells Jesus, “Go away from me, Lord; I am a sinful man” — and replaces it with age-of-Oprah banalities like, “Just give me an hour, and I will give you a whole new life” and “I’m giving you the chance to change your life.” Biblical notions of sinfulness and holiness have been chucked out the window in favour of “exciting” but generalized ideas about change, change, change.

And then the clip ends on a note that is ripe for parody, as Jesus tells Peter that they will “change the world” and he then stares off into space as the camera spins around them and the music swells. Watching that bit is kind of like staring at Brad Pitt’s recent perfume commercial while listening to the soundtrack for Gladiator (2000); you’re supposed to think something Important has just happened here, but all I see is two actors wondering “How long do we have to hold this pose?”

Around the 13:10 mark, Burnett introduces a second clip, in which Pilate talks to Jesus (based on John 18:33-38) and then his wife (based on Matthew 27:19). The dialogue here sticks closer to the text — and the bit between Pilate and his wife adds some plausible motivation for Pilate’s actions — but again, it doesn’t look too impressive to me. Jesus keeps staring up at the light, and all I can think about is where that light is coming from, and whether Jesus’ words would have had the same spiritual significance if he didn’t have a light shining on him there and then.

In a word, if I had to sum up how these two clips come across, I’d have to say: Kitsch. Since the stories about Jesus are very different from the stories about Moses and David and so on, the kitschiness of these clips doesn’t necessarily spell doom for the mini-series as a whole. But they don’t bode very well, either.

February 7, 2013
Newsbites: The ancient and/or biblical edition!
Next Post