Harrison Ford asks: “Is Indy a believer?” “Where in Bible?” 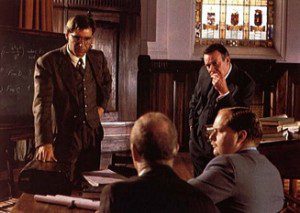 Cinephilia & Beyond has found what it claims is Harrison Ford’s copy of the original shooting script for Raiders of the Lost Ark (1981), complete with Ford’s hand-written notes. The site has posted only a few pages from the script so far, but the bits they have revealed are certainly interesting.

One page, for example, includes some extra dialogue regarding the fate of Abner Ravenwood, the former mentor to Indiana Jones and the father of Indy’s on-and-off girlfriend Marion Ravenwood.

But the page that jumps out at me is the one where Indy and his colleague Marcus Brody discuss the Ark of the Covenant with the government agents near the beginning of the film. (You can see the page below, at the bottom of this post.)

In the margins, Ford wrote: “IMP[ORTANT]: IS INDY A BELIEVER” — and this is certainly a key question throughout the film. Indeed, as I noted in my article on the series for Books & Culture, this question is part of a recurring (if increasingly implausible) pattern throughout the series: each film begins with Indy expressing skepticism in the supernatural and ends with him believing, on some level, in whatever supernatural object he has encountered this time.

I also like the way Ford wrote “WHERE IN BIBLE” next to this bit of dialogue, which was apparently going to be spoken by Indy before it was transferred to Brody:

Oh yes. The Bible tells of it leveling mountains and wasting entire regions. Moses promised that when the Ark was with you, “your enemies will be scattered and your foes flee before you.”

An army which carries the Ark before it is invincible.

I don’t know if Ford was asking where the entire bit of dialogue came from, or just where the bit between the quote marks came from, but for what it’s worth, the line attributed to Moses here — which was ultimately cut from the finished film — comes from Numbers 10:35, which says (in the NIV translation):

Whenever the ark set out, Moses said,

“Rise up, Lord!
May your enemies be scattered;
may your foes flee before you.”

One key detail to note here is that, in the script, the second-person “you” and “your” seem to refer to the people who carry the Ark before them — but in the original biblical passage, “you” and “your” clearly refer to God himself. In the Bible, Moses directs these words to God as part of a call for God to act (and this prayer is repeated in churches to this day, when we sing “Let God arise! Let his enemies be scattered!”), but the film suggests that Moses directed these words to other people.

Still, even a cursory reading of the Old Testament should demonstrate that the Ark of the Covenant did not guarantee military power to whoever happened to be carrying it; just look at the story in I Samuel 4-6 in which the Israelites take the Ark into battle assuming it will help them win, and then they suffer a devastating defeat, after which the Philistines take the Ark back to their own country and discover that it brings a plague with it wherever it goes. (Note, incidentally, how the end of that story includes an episode very much like the end of Raiders, in which dozens of people are struck down dead for looking inside the Ark.) The Ark cannot be manipulated the way Indy or Brody suggest, here; it is a tool of God’s, and not a tool of our own — and I think the film as a whole ultimately affirms that broader point of view.

If, however, Ford was wondering where the Bible talks about the Ark of the Covenant “leveling mountains and wasting entire regions,” then I must confess I’m not entirely sure. I have long thought that this might be an indirect reference to the story in Numbers 16 about the ground opening up and swallowing the families of Korah and his associates when they rebelled against Moses, but there is no explicit reference to the Ark in that passage. The Ark presumably would have been inside the Tabernacle when the cloud marking “the glory of the LORD” appeared there, though.

Finally, there is the curious bit at the end of the dialogue in which Indy says:

It’s said that the Lost Ark will be recovered at the time of the coming of the True Messiah.

As you can see, it appears that this line was struck from the script while they were still shooting the film — and I can think of a few reasons why they might have cut it.

For one thing, it doesn’t really add anything to the film. The prospect of the Nazis having an “invincible” army is reason enough for us to root for the good guys.

Second, it had the potential to be religiously divisive. Christians believe the Messiah has already come, in the person of Jesus, and the Ark was lost several centuries before then — so if the Ark hasn’t been recovered yet, the prophecy Indy cites here would seem to indicate that Jesus wasn’t the Messiah.

Third, what would the implications of this line be for the end of the film, when the Ark is recovered and ends up in American hands? Would there, in fact, be a “True Messiah” somewhere in the world? If so, who would he be? If not, then would the prophecy be disproved, and would the Ark therefore lose some of its mystique?

As it stands, the film ends with the Ark vindicating most of the claims that have been made about it earlier in the story, so it would arguably undermine that ending if there had been other claims that did not get a similar sort of payoff.

Anyway, here’s the page itself. Enjoy: 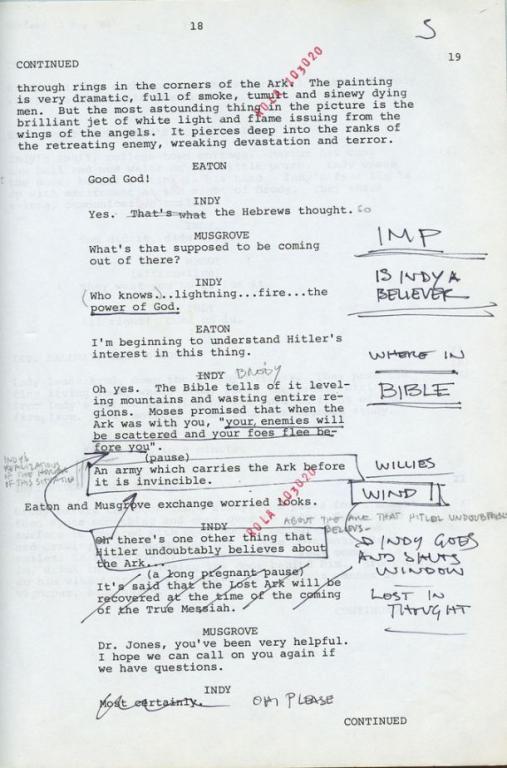 February 21, 2013
Adam and Dog and expressions of Grace
Next Post

March 8, 2013The Bible: first episode, first impressions
Recent Comments
1 Comment | Leave a Comment
Browse Our Archives
get the latest from
FilmChat
Sign up for our newsletter
POPULAR AT PATHEOS Entertainment
1