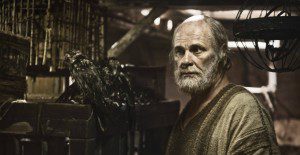 I don’t get cable at home, so it took me a while to catch up with the first episode of The Bible, which premiered last Sunday. There are four more episodes to go, so it’s too early to review the series as a whole right now, but for now, these are my first impressions.

The pacing. The Bible is very rush-rush-rush, especially in these early Old Testament episodes.

The sheer speed of the series hits you right from the start, when the stories of Creation, the Fall, Cain and Abel and Noah’s Ark are all zipped through in the five-minute prologue that plays before the opening title. And by the time the episode’s 85 minutes are over (it’s sometimes called a “two-hour” episode, but 85 minutes are all that’s left after we bracket off the commercial breaks), we have sped through the stories of Abraham and Moses and made our way to the spies who are sent by Joshua into Jericho.

Needless to say, a lot of narrative and emotional nuance gets lost along the way. Abraham sends Hagar and Ishmael away, and we never see how God answered Hagar’s prayer or how Ishmael and Isaac were reunited after the death of their father. God tells Abraham to sacrifice Isaac, and there is no context for that request, no hint that child sacrifice may have been a common practice in the surrounding cultures of that era. The Pharaoh yells “No!” to Moses’ demands for liberation after each and every plague, and there is no indication that the Pharaoh actually said “yes” on some occasions and then broke his promise. Moses receives the Ten Commandments on tablets of stone, but he never breaks those tablets because the mini-series skips right past the Golden Calf episode. And so on, and so on. 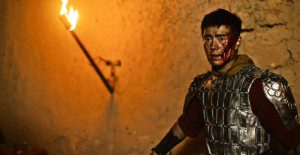 The violence — sorry, the “action”. For all the compression they imposed on the Old Testament here, the filmmakers still found time to add some gratuitous swordplay. Abraham’s raid against the people who captured Lot certainly has a biblical basis, but I can think of no precedent for the angels in Sodom pulling out their swords and hacking away at the Sodomites, or for the bit at the end when the Israelite spies get into a bit of a fight with the people of Jericho.

No doubt the swordplay was added to make the series more “exciting”. But to the extent that it’s just generic hack-and-slash footage, designed to give the average TV viewer what he or she wants, it also makes the series more banal. And I have qualms with the way Abraham yells “Trust in God!” — a detail that has no biblical basis — as he leads his men into battle.

The us-vs.-them sensibility. Abraham’s battle cry is just one way in which this series encourages a certain kind of militant attitude among its devout viewers. Then there is the bit near the end of the Exodus, when Moses looks across the Red Sea at the Pharaoh and says, “You are not God, Pharaoh. There is only one God, and he is here — with us.”

Certainly part of the point of the ten plagues was to show that the gods of Egypt, including the supposedly divine Pharaoh, were not true gods at all. But there is something about the way Moses expresses this idea — the emphasis on God being “with us” and therefore not with you — that doesn’t sit right with me.

Echoes of other Bible movies. I have mentioned before that some of the clips that have already been released online seem to borrow their imagery from previous Bible films such as The Prince of Egypt (1998) and The Passion of the Christ (2004). To that list of clips we can now add the prologue, which depicts the narrative of the Creation and the Fall as a story-within-the-story that Noah tells to his fellow passengers aboard the Ark — a device that was previously used in the excellent mini-series Testament: The Bible in Animation (1996).

Also, I could not help but think that the quasi-aerial footage showing the creation of the Earth was a bit reminiscent of the “Genesis Planet” sequence from Star Trek II: The Wrath of Khan (1982). That’s not exactly a Bible reference, admittedly, but the word “Genesis” does come up there, so, y’know, it sorta fits.

Continuity between Bible stories. One of the advantages of doing a series like this is the way certain characters — especially supernatural characters — can hold the stories together through consistent characterization. The angels who appear to Abraham are dressed exactly like the angels who will later appear to Mary and Joseph, for example. I imagine the Satan figure who appears in Eden (and Sodom!) will also pop up in later episodes, too.

I am also impressed by the way Moses says, on more than one occasion, that he is leading the Israelites out of Egypt to fulfill God’s promise to Abraham. Other movies about Moses have tended to neglect the history that the Israelites already had at that point (one noteworthy exception is the brief appearance of Joseph’s sarcophagus within the Israelite caravan in the 1956 version of The Ten Commandments), so it’s good to see that history acknowledged here — especially since Genesis tells us that God did, in fact, tell Abraham about the future enslavement and liberation of his descendants, centuries in advance. 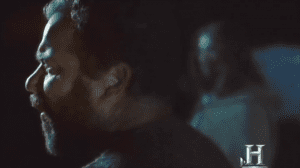 But perhaps the most potentially daring bit of continuity here is the mini-series’ treatment of the angels who visit Abraham. It seems fairly clear from Genesis 18 that one of these angels was actually God himself, and the mini-series keeps this particular angel’s face either out of focus or out of the frame entirely. But I cannot help but wonder who the actor is here, and whether this might, in fact, be the same actor who will go on to play Jesus in the later episodes. And I cannot help but wonder if we will see even more “Christophanies” in the remaining Old Testament episodes.

The cross-cutting between Bible episodes. To help compress the stories the mini-series does tell, it sometimes cross-cuts between them in a way that, at the best of times, enhances the drama or allows one episode to comment on the other.

A good example of this is the fate of Sodom, where the mini-series cuts back and forth between Abraham negotiating with God to spare the city of Sodom, on the one hand, and the angels trying to save Lot from the people who live there, on the other hand. For those who don’t know the story already, this produces a certain amount of tension: How many righteous people will it take for God to spare the city? How many righteous people will the angels find, if any?

More awkward is the opening prologue, in which we get flashbacks to the Creation and the Fall etc. while Noah summarizes those stories. The way it’s written, Noah ends up telling the story out of order, describing the Fall and the centuries of evil that followed before he gets to the part where God rested on the seventh day.

And what point is made, exactly, by comparing God’s rest on the seventh day to the moment when the rains stopped flooding the Earth? Perhaps the filmmakers were trying to draw some sort of parallel between God’s powers of creation and destruction, but the point is muddied when the reference to the seventh day is separated from the Creation part of the narrative as much as it is here. 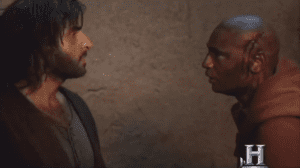 Some characters are more vulnerable than we might have thought. Is that really blood we see on the heads of the angels in Sodom, before they pull their swords out and go all ninja on the Sodomites? Maybe the blood was just there for show — maybe it was part of an elaborate test to see if Lot or anyone else would show them sympathy — but the episode is vague on this point.

If anything, actually, the rough treatment Moses receives at the hand of the Egyptians is kind of hard to reconcile with the fact that the mini-series has made Moses out to be more confident than the Bible would suggest. Moses, you may recall, had a reputation for being “a very humble man, more humble than anyone else on the face of the earth”, and for not being a very good speaker — which is why God assigned Aaron to speak on Moses’ behalf. But all of that is forgotten here — even though the Egyptians are giving him every reason to express the self-doubts that he expressed in the Bible. 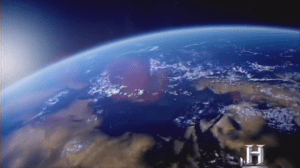 Modernizing. I can understand why the filmmakers show the Earth from space after the Flood comes to an end: it’s the most literal interpretation possible of the passage which says “all the high mountains under the entire heavens were covered.” But I can’t help wondering if the ancient Hebrews who heard and told this story would have recognized the cosmology behind this shot.

Inaccuracies. As I have said before, Bible movies that get the evangelical imprimatur are always promoted as being “biblically accurate”. This makes the actual inaccuracies that inevitably find their way into the script stick out all the more.

Two come to mind from this first episode, though there are probably more.

First, the angels who arrive in Sodom cry for help, and Lot responds to their distress. This is the exact opposite of what happens in Genesis 19, where Lot greets the angels with a display of hospitality which the angels initially resist, but Lot “insisted so strongly” that the angels eventually went back to his house with him. 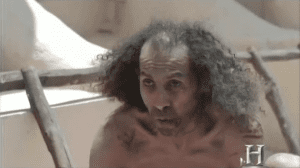 Second, when young Moses kills the Egyptian, the slave who was being beaten by the Egyptian offers to bury the body. Again, this is the exact opposite of what happens in Exodus 2, where Moses himself buries the body and is shocked when a Hebrew slave throws his knowledge of the murder in Moses’ face.

Changes like these are not necessarily problematic; dramatic adaptations of literary texts always make changes of one sort or another. But we have to be attentive to those changes. Sometimes they speak to nothing more than an aesthetic agenda, such as the need to make a story fast-paced or “exciting”. And sometimes they speak to something deeper.

That’s it for now, I think. More comments later, perhaps, after the second episode airs this Sunday.