Samson and the upcoming Bible mini-series 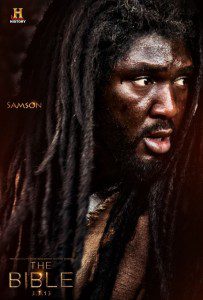 For just over a month now, the History Channel has been releasing a series of clips and trailers to promote their mini-series The Bible, which premieres March 3. The promotional campaign started, appropriately enough for mid-December, with a couple of Christmas-themed ads, and it has since moved on to clips and images from other parts of the Good Book.

Today my fellow Patheos blogger Rebecca Cusey posted one of the first images of Samson, who is played by British actor Nonso Anozie. And, as you can see, this Samson looks a little different from the Samsons you might have seen in earlier films or TV shows.

Casting an actor of African descent as an Israelite hero is interesting, to say the least — especially in a series that features a lot of other ancient Israelite characters who are played by actors of a more conventional sort of ethnic background. (The actor playing Jesus, for example, is Portuguese, while the Virgin Mary will be played by series co-producer Roma Downey, who was born in Northern Ireland.)

But it is particularly interesting that the producers decided to make this character stand out from the rest.

The biblical Samson comes from the tribe of Dan, and there has long been speculation that the tribe of Dan might not have been Semitic, historically, like the rest of the Israelite tribes, but might instead have been a basically European ethnic group that was assimilated into the ancient kingdom of Israel.

According to this theory, the tribe of Dan might be related to the Danaoi who appear in Homer’s Iliad, as well as to the Denyen who were among the “Sea Peoples” that attacked Egypt and then settled along the eastern Mediterranean coast in the 12th century BC. (One of the other “Sea Peoples” was the Philistines.)

In support of this theory, it is sometimes pointed out that Samson often comes across less like a Hebrew judge and more like the sort of mythical strongman that we encounter in the Greek legends about Hercules, etc. And, of course, it is the Philistines — one of the other “Sea Peoples” — with whom Samson does battle.

So the mini-series seems to concur with the idea that Samson and his tribe were somehow different from the other Israelites, but, while there has been a fair bit of speculation that the tribe of Dan was a European group that got assimilated into the Israelite nation, the mini-series seems to be pulling them in an African direction — making Samson a descendant of Ham rather than Japheth, so to speak.

Of course, it’s possible that the mini-series doesn’t mean to suggest anything historical whatsoever; it could be that the producers are approaching the Bible the same way that, say, Kenneth Branagh approached Shakespeare when he cast Denzel Washington and Keanu Reeves as brothers in Much Ado about Nothing (1993). The play’s the thing, and anyone can play any part in it.

But if that is the approach they are taking, then it means this series is less concerned with realism or authenticity than many Bible films have been of late.

Or, alternatively, it could be that they are taking a different aesthetic approach for each episode — similar, perhaps, to how the series Testament: The Bible in Animation (1996) featured different forms of animation in different episodes. The diversity of portrayals in that case did not undermine the unity of the series as a whole, and something similar could be going on here, too.

For more on this general topic, see the article on ethnicity in Jesus films that I wrote several years ago, around the release of The Nativity Story (2006).

As for the upcoming mini-series, here are some of the clips that have been released over the past few weeks, and which I have neglected to blog — until now!

First, here is the original trailer for the mini-series:

Next, here is one of the music videos that was released just before Christmas:

Incidentally, my friend Matt Page has suggested that the bits depicting Christ’s passion are very reminiscent of Mel Gibson’s The Passion of the Christ (2004). In that vein, I would add that the bit in the trailer where Moses parts the Red Sea reminded me instantly of the DreamWorks cartoon The Prince of Egypt (1998).

And, finally, here is a clip of the Nativity — which, as you can see, follows recent films in depicting Mary going through labour pains as she gives birth to Jesus:

January 24, 2013
Solomon, his two lovers, and the demons they battle
Next Post

February 4, 2013 Belated thanks to TCU's Reel Religion Film Festival
Recent Comments
4 Comments | Leave a Comment
Browse Our Archives
get the latest updates from
FilmChat
and the Patheos
Entertainment
Channel
POPULAR AT PATHEOS Entertainment
1