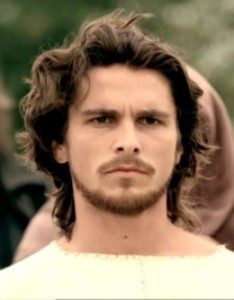 Yesterday I passed along the news that Exodus, Ridley Scott’s version of the life of Moses, was “gathering steam” at 20th Century Fox, even as Steven Spielberg had dropped out of directing another Moses movie over at Warner Brothers. Well, now comes word, via Deadline, that Fox and Scott are talking to Christian Bale — who landed one of his first acting gigs in Spielberg’s Empire of the Sun (1987) before growing up to star in the Dark Knight trilogy (2005-2012) etc. — about playing Moses himself. This would not be Bale’s first biblical role; he previously played Jesus in the TV-movie Mary Mother of Jesus (1999), and he briefly considered taking the starring role in Darren Aronofsky’s Noah as well. Bale passed on that role in the end, and he might pass on this one too, but still, it’s another sign that the studios are very keen on making another big-screen movie about Moses — the first such live-action film in almost 60 years.

March 16, 2013 Flashback: Reviews of yet another Bible TV series.
Recent Comments
0 | Leave a Comment
Browse Our Archives
Follow Us!