“Kirk is a man of passion and emotion and follows his gut.” So says Chris Pine in a new Star Trek into Darkness featurette.

To a certain extent, Pine is correct: Kirk does indeed have these characteristics. But on another level, Pine’s statement reflects one of the subtle but significant changes that the new films have made to the original Star Trek characters.

The way Pine speaks of Kirk’s “passion” and his “gut” reminds me of a point that John Granger made in his book The Hidden Key to Harry Potter.

In that book, Granger noted that a franchise often revolves around three characters who represent the classic division of the human being into body, mind and spirit. As Granger put it, the body and the mind — or the stomach and the head — are like horses that need to be guided by a charioteer between them, which is the spirit, or the heart. And Granger saw this division of roles in the relationship between Harry Potter (the heart), Hermione Granger (the head) and Ron Weasley (the stomach) — but also in famous triumvirates like Kirk (the heart), Spock (the head) and McCoy (the stomach).

So it seems to me that the J.J. Abrams films have conflated Kirk and McCoy to a certain degree — if not displaced McCoy altogether — and have thus divided the central roles between two people instead of the classic three. Or perhaps it is the original Kirk who has been displaced, inasmuch as he no longer represents the heart or spirit of the franchise’s central relationship, but is now its gut or passion. 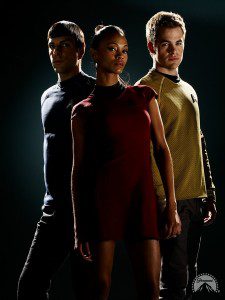 And speaking of displacing McCoy… We could actually go one step further and argue that the original triumvirate of Kirk-Spock-McCoy has been replaced by a new one, in the last film at least, of Kirk-Spock-Uhura. I forget who it was, but one critic noted four years ago that the first J.J. Abrams film made a point of tracing Kirk’s character arc through Uhura’s eyes: she dismisses him as a skirt-chasing layabout when we first meet him, and then gradually, by the end of the film, she comes to trust him as a leader and as captain of her ship.

Karina Longworth also noted at the time that Abrams basically recycled the central character dynamic of his TV show Felicity, by positioning Uhura as a woman caught between a “cute brainiac” and a “brooding blonde hunk”. She added:

Eventually Keri Russell’s Felicity had to choose one male polarity over the other, and live a life deprived of the charms of the second place candidate. But being that the boys of Star Trek will ultimately choose each other — er, their common mission — over womankind, space can benefit from both, while the question as to what type is more desirable can remain infinitely unresolved.

It remains to be seen whether Uhura will continue to play a central role in the new film; at least one early review has already complained that she is “demoted to whining comic-relief.” But in the previous film, at least, one could argue that it was she, if anyone, who played the “heart” to Spock’s “head” and Kirk’s “stomach”.

And as for Kirk?

So far, it seems, he is still the hothead that he was in the previous film. The original Kirk often went with his “gut” in the sense of following his instincts, but in the new films, his “gut” seems more reminiscent of the rash emotionalism that was once personified by Doctor McCoy. Whether Kirk can grow past this stage to become the “heart” of the series — the person who can balance the logic and emotion of his crewmates in service of both higher ideals and common humanity — remains to be seen. But I do hope that he, and the movies as a whole, get there in the end.

April 23, 2013
The naked Christ in film: birth, death and resurrection
Next Post

April 26, 2013 It's all connected: Gertrude Bell, Harry Potter and more!
Recent Comments
1 Comment | Leave a Comment
Browse Our Archives
get the latest from
FilmChat
Sign up for our newsletter
POPULAR AT PATHEOS Entertainment
1