The Bible to get shorter running time, bigger screens 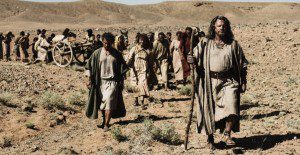 It’s already a record-setting TV series and a record-setting DVD release. Now The Bible is headed for theatres… or some similar public venue. Deadline reports that producer Mark Burnett made the announcement tonight while promoting one of his “reality TV” shows.

The series, which condensed the entire Bible down to about seven hours (or ten, once you add commercials), has reportedly been re-cut into a three-hour movie. Burnett has not yet decided whether to distribute the movie himself or to accept one of the “many offers” he has received from potential distributors, but he’s currently looking at releasing it in the fall — possibly in theatres, but also possibly in arenas.

It remains to be seen whether the three-hour version of The Bible will keep the same basic structure as the mini-series, dividing its time equally between the Old and New Testaments. It will also be interesting to see whether any deleted scenes get incorporated into this shorter version of the mini-series.

This would not be the first time that a Bible mini-series was condensed for theatrical re-release. The six-part mini-series Moses the Lawgiver (1974), starring Burt Lancaster, was cut down to 141 minutes for its theatrical release in 1976. And Campus Crusade’s Jesus (1979) film was condensed — and partly re-shot — from a roughly four-hour adaptation of Luke’s gospel produced by the Genesis Project.

Update: The Hollywood Reporter has its own take on the story — and reports that Burnett is considering a sort of sequel that would tell even more stories set “in the same world”. “I do have scripts in my bag that I just received today for what’s next,” he is quoted as saying. “We feel there is a void and we’re filling that void.”

With any luck, at least one of those scripts will tell the stories of Elijah and Elisha.

April 24 update: Don’t know how I missed this before, but in the Hollywood Reporter story, Burnett says the movie will be “a three-hour version of Jesus” (his words, not the reporter’s) and “will have a big focus on the Resurrection” (the reporter’s words, not his).

That suggests they are dropping the Old Testament entirely, which means they’d only have to condense five episodes — or about four hours’ worth of material, including all the stuff from Josephus, Acts and Revelation — down to three hours.

And, given that Jesus pops up quite a bit in the mini-series after his resurrection — even at points in the story where the Bible would indicate that he didn’t — it also suggests that they might keep some of the material from Acts and Revelation, which most Jesus movies never do. That could be interesting.

April 23, 2013 The naked Christ in film: birth, death and resurrection
Recent Comments
1 Comment | Leave a Comment
"In 1972, yes. The movie was made in 1956 but the ratings system didn't exist ..."
Peter T Chattaway One of the reasons I do ..."
"And to think... this movie was rated G? It was."
Bishop One of the reasons I do ..."
"John 7:5 states explicitly that the brothers of Jesus did not believe in him, at ..."
Peter T Chattaway The Chosen starts shooting its second ..."
"Thanks. There is a whole other anecdote in between those two verses. Other relatives, sure, ..."
tmirus The Chosen starts shooting its second ..."
Browse Our Archives
get the latest from
FilmChat
Sign up for our newsletter
POPULAR AT PATHEOS Entertainment
1