An open letter to the makers of the next Bible series 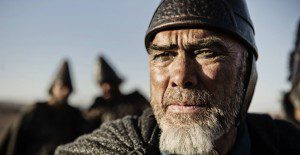 The Bible was a big hit on cable TV. Now it’s a big hit on video, too, as various sites are reporting that it became the top-selling mini-series ever on DVD and Blu-Ray last week, as well as the top-selling TV release of any sort on DVD in five years. And that’s not counting the various online distribution methods.

Ordinarily, success of this sort would guarantee one thing: that other studios and networks would try to replicate the mini-series’ success by producing biblical TV shows and movies of their own. So I’d like to make a plea to any studio or production chiefs who might happen to come across this post.

Namely: Please don’t just make another movie about Jesus or Moses or even David. We’ve had lots of those already, and we’ve already got more of those in the works. What I would like to see is a filmic representation of some part of the Bible that has never (or almost never) been filmed before.

The Bible itself pointed the way in its third episode, when it devoted almost an hour to the fall of Jerusalem and the Babylonian exile.

Like so much else in this mini-series, the storyline here was highly compressed and left out many, many details, some more important than others — but it is so incredibly rare to see this part of Israelite history dealt with at all on film that I didn’t mind. It was a treat just to get a taste of Jeremiah’s prophecies, his eventual exile to Egypt, the capture of Daniel and his friends, the blinding of Zedekiah, and so on.

Now imagine what a mini-series dedicated to this part of the Bible, or an ongoing series a la HBO’s Rome or Game of Thrones, could do with this material.

Or, even better, you could devote a series to an important section of the Bible that the recent mini-series never even addressed: namely, the section dealing with the Omrid dynasty (between roughly I Kings 16 and II Kings 10, with some parallel material in II Chronicles 17-22).

Elijah, in particular, is a fairly big deal in Jewish and Christian thought. Jews save a seat for him when they celebrate the Passover, while Christians regard John the Baptist as a “type” of Elijah who prophesied the coming messiah. In the New Testament, Jesus sometimes refers to the Old Testament as “the Law and the Prophets”, and if Moses represents “the Law”, then Elijah represents “the Prophets” — yet there are many movies about Moses and virtually none about Elijah.

But there’s plenty of other intrigue to be found in this period, too. Just look at how Omri, the father of Ahab, became King of Israel in the first place: he was a general in the Israelite army, when one of his fellow generals, a man named Zimri, assassinated the king and assumed the throne. Omri promptly laid siege to the city, and Zimri committed suicide after “ruling” Israel for only seven days.

Years later, when Omri’s grandson (King Jehoram of Israel) and great-grandson (King Ahaziah of Judah) were assassinated by a general named Jehu, Omri’s daughter-in-law, Jezebel, taunted Jehu by reminding him that Zimri’s coup had failed spectacularly. In response, Jehu ordered Jezebel’s servants to throw her out the window. Which they did.

So you’ve got a narrative that could come full circle, there. And there’s plenty of drama that takes place between those two coups: a marriage between the royal families of Israel and Judah, in which one of the partners, the future Queen Athaliah, was the sort of person who would one day execute all her grandchildren; religious tension between the Yahweh-worshipping King Jehoshaphat of Judah and the, um, more mixed religious sympathies of Ahab’s court; plus the various confrontations between the prophets and the Kings of Israel over the prophets of Baal, the murder of Naboth, the war against the Moabite king Mesha, and so on, and so on.

If that’s all a bit too obscure for you, I understand. These stories have never been dramatized at any length before, not for a mass audience at any rate, and the people who greenlight these things like to go with safer bets. I get that.

But if you did decide to tackle this material, then I, for one, would be very grateful. I might even go easy on you for throwing in whatever gratuitous sex and violence you think it would take to sell a series like this. (Not too much, though, mind…)

Just tell the stories. Bring them to life.

April 12, 2013 The Bible / What works and what doesn't in the ambitious mini-series
Recent Comments
4 Comments | Leave a Comment
Browse Our Archives
Follow Us!