“We’ve tried to get away from the Trekkiness of it all.” 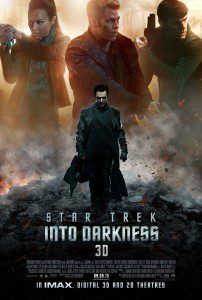 I’ve made this point before, but it bears repeating: For most of their history, the Star Trek movies have tended to be formulaic action-oriented good-guy-vs.-bad-guy flicks, and have not reflected the wide range of stories that characterized the original TV series.

The TV show had its villains and action-oriented episodes too, of course, and sometimes the movies made in that vein have been very good, as was the case with Star Trek II: The Wrath of Khan (1982).

But at other times the action has seemed forced and rote, as it did in Star Trek: Insurrection (1998), where it was fairly clear that at least some of the creative personnel wanted to do something different from the last few movies — something lighter, funnier, more romantic, etc. — but, as producer Rick Berman said at the time, “of course” the movie still had a fair bit of running and shooting and so on.

The reasons for this formulaic tendency are obvious: Movies need to sell tickets if they’re going to be profitable, so they need to appeal to a broader audience than the hardcore fans who tune in to the TV show every week. What’s more, because the movies are made only every three years or so, each one needs to be an “event”, unlike a TV series, where there is greater freedom to experiment from week to week.

This tendency to dumb the franchise down in pursuit of a mass audience only intensified when the movies were handed over to J.J. Abrams and his team. Their Star Trek (2009) had a bigger budget than any of its predecessors — rivaled only by the expensive-for-its-time Star Trek: The Motion Picture (1979), once you take inflation into account — so there was obviously a lot of money at stake. And thus, their movie emphasized the action scenes big-time, even as it was the first film in the series that didn’t really seem to be about anything, other than franchise self-perpetuation.

The first Abrams movie was rewarded for its efforts with box-office success; it was the first Star Trek movie to gross over $200 million in North America (and only the second to gross over $100 million), and it ranks as the top-grossing film in the franchise even after you take inflation into account.

But one thing the first Abrams movie didn’t do was win over foreign audiences — and that’s where the studios make a lot of their money these days.

See, for example, this list of the biggest hits of 2012 worldwide: only one of the top 20 films (The Hunger Games) made less than half of its money overseas. Most, if not all, of the Star Trek movies — including the first Abrams film — have done even worse, and have made only about one third of their money overseas, if that.

Thus, as the Hollywood Reporter notes today, the studio has been pulling out the stops lately to promote the next film overseas. And that, not surprisingly, has meant dumbing things down even more, at least at the promotional level:

Paramount is playing up Benedict Cumberbatch’s villainous character in many foreign markets where a bad-guy-vs.-good-guy storyline resonates best. And the studio is promoting the fact that much of Into Darkness takes place on Earth — not in space. “In many places, we did extensive research to find out what we should showcase,” explains president of international distribution Anthony Marcoly. “Overseas, we’ve tried to get away from the Trekkiness of it all.”

The question this raises is whether these marketing considerations had any effect on the creative side of things. Did Abrams and company write an apparently Earth-bound Star Trek story — a Star Trek story that “gets away from the Trekkiness of it all” — because that was truly the best story they could think of? Or did they go that route because that was what the studio’s marketing department wanted?

In fairness, there may be other forces at work here, too.

For all its efforts to depict global and, indeed, interstellar co-operation, Star Trek has always had a distinctly American sensibility, rooted in westerns and the like; the original series was pitched to the networks as “Wagon Train to the stars”, and the opening voice-over declared that space is “the final frontier”.

The original series and the original movies also coincided with the rise of NASA and some of its earliest successes; the show had actually already aired its last episode before the first man set foot on the moon in 1969, and the first space shuttle was named Enterprise in the show’s honour prior to its roll-out in 1976 — just in time to have a cameo in the first Star Trek movie. These days, however, the space-shuttle program has been mothballed, and NASA’s budgets have been cut, and there is a sense out there that the public isn’t as interested in this stuff as it once was.

In any case, whatever reasons may lie behind the new film’s more Earth-bound sensibilities, I emphasize that the problems here didn’t begin with Abrams’ stewardship of the franchise. The tendency to set large portions of the Star Trek movies in or near Earth — this, despite the fact that the original TV series never visited Earth except when the characters traveled back in time — goes back to the very first film. But it would seem that things are getting worse, not better, in that regard.

On that note, do check out this editorial by “Nordling” at Ain’t It Cool News, which is headlined: “Where’s All The Trekking Gone In STAR TREK?” As he points out, the poster that debuted a few weeks ago — which I’ve included at the top of this post — might sell tickets, but it doesn’t really capture the spirit of Star Trek, does it?

It’s good to see that the makers of these films are trying to broaden their horizons, as far as finding an audience goes. But it’s a shame that, in doing so, they feel they have to pull back where it really counts, in the stories and what they stand for. 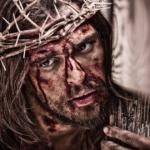 April 8, 2013
History and tradition in movie depictions of the Cross.
Next Post

April 11, 2013 An open letter to the makers of the next Bible series
Recent Comments
0 | Leave a Comment
"In 1972, yes. The movie was made in 1956 but the ratings system didn't exist ..."
Peter T Chattaway One of the reasons I do ..."
"And to think... this movie was rated G? It was."
Bishop One of the reasons I do ..."
"John 7:5 states explicitly that the brothers of Jesus did not believe in him, at ..."
Peter T Chattaway The Chosen starts shooting its second ..."
"Thanks. There is a whole other anecdote in between those two verses. Other relatives, sure, ..."
tmirus The Chosen starts shooting its second ..."
Browse Our Archives
get the latest from
FilmChat
Sign up for our newsletter
POPULAR AT PATHEOS Entertainment
1