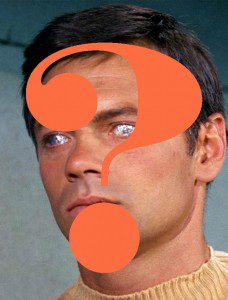 First, let’s get what should be obvious out of the way: you don’t need a villain to make a good Star Trek story. Indeed, the top-grossing entry in the franchise ever, prior to J.J. Abrams’ reboot a few years ago, was Star Trek IV: The Voyage Home (1986), and there were no villains in that film unless you count the human race, which had hunted humpback whales to extinction.

Likewise with the original TV series, in which some of the best-loved episodes, such as ‘City on the Edge of Forever’, didn’t have any villains whatsoever, while others — such as ‘The Naked Time’, ‘The Enemy Within’ and ‘Amok Time’ — were primarily concerned with the conflicting passions within our heroes and not with any external antagonists that they might face. (You could even toss ‘Mirror, Mirror’ into that last list; the Mirror Universe counterparts to our heroes might be villains in some sense, but they also suggest something about our heroes’ darker sides, and the episode itself is primarily concerned with getting each set of characters back to the universe in which they belong, not unlike how Kirk’s better and darker halves are restored to their proper balanced relationship to one another in ‘The Enemy Within’.)

And then there’s ‘The Trouble with Tribbles’, where the Klingons are certainly antagonists of a sort, but in a way that is played strictly for laughs; the one incident of violence in the entire episode is a bar brawl played for comic effect — and it is technically started by Scotty, not the Klingons.

Even when Kirk faces a more lethal sort of nemesis, the episode in question is just as likely to underscore the fact that Kirk and his opponent are really just opposite sides of a conflict that is bigger than either of them, and bigger than any easy attempts to identify one side or the other as “good” or “evil”. In ‘Balance of Terror’, the Romulan commander might be engaged in a life-or-death combat with Kirk, but is he really a villain, per se? (If anything, the greater evil in that episode is represented by the Starfleet officer who, upon noticing the resemblance between Romulans and Vulcans, allows his prejudices against one group to spill over to the other.) Likewise the Gorn captain in ‘Arena’, whose life Kirk spares when he realizes that the Gorn may have been acting in self-defense.

Now, certainly, of course, there have been villains in Star Trek, the most famous of whom is Khan Noonien Singh, the genetically-engineered 20th-century warlord who was introduced in ‘Space Seed’ and returned to the franchise 15 years later in Star Trek II: The Wrath of Khan (1982).

But my point here is that Star Trek doesn’t need a villain who threatens everyone’s life and is, himself, killed by the end of the episode. It may indeed be that most of the Star Trek movies — including every single film going back at least as far as Star Trek VI: The Undiscovered Country (1991) — have lapsed into this kind of storytelling pattern. But it doesn’t have to be that way.

That being said, J.J. Abrams has shown no interest in breaking this mold; indeed, his mission all along has been to make Star Trek movies for people who don’t necessarily care about Star Trek, and if that means conforming to the template that demands big fights, big explosions, and big villains, then, apparently, so be it.

The big mystery now, of course, is who the villain in the next Star Trek movie will be. We all know who is playing him — namely Benedict Cumberbatch — but Abrams, as is his wont, won’t say who the character actually is. And so everyone has been jumping on the latest bits of news, rumour and, no doubt, deliberate misinformation, hoping to figure things out before the movie’s p.r. campaign kicks into high gear and makes the answer obvious.

The latest bit of buzz was generated a few days ago by Karl Urban, who plays Dr McCoy in the new films; when SFX asked him what it was like to work with Cumberbatch, Urban replied: “He’s awesome, he’s a great addition, and I think his Gary Mitchell is going to be exemplary.”

Taken at face value, then, it would seem that Urban has just revealed that the villain or antagonist of the new film will be Gary Mitchell, the former Starfleet Academy buddy of Kirk’s who, on the original timeline, acquired godlike powers after an encounter with the Galactic Barrier and thus became an arrogant menace to his former shipmates. But should we take Urban’s claim at face value? Maybe, maybe not.

On the maybe side of the ledger:

On the maybe-not side of the ledger:

Personally, I’m inclined to think that Urban — one of the few members of the current cast who was already a Star Trek fan before he got the gig — was knowingly stirring the pot a bit and tossing a bit of misdirection our way. (The fact that Urban backtracked a bit today, attributing his comment to jet lag and saying he is “really not at liberty to discuss anything about Star Trek,” could be taken in either direction, of course.)

Until now, much of the buzz had insisted that Cumberbatch might be playing a more obvious sort of villain, namely the aforementioned Khan Noonien Singh.

On the maybe side of the ledger:

On the maybe-not side of the ledger:

So, make of all that what you will. Personally, I think the evidence tilts towards Cumberbatch playing Khan, unless all those highly-placed sources have been waging a steady campaign of misinformation — which I don’t necessarily rule out.

But, as various sites have noted, filmmakers often misinform the public by denying that the rumours are true even when, in fact, the rumours are true. Michael Bay and Zack Snyder once explicitly denied that Megatron and General Zod would appear in their Transformers and Superman films, respectively, and Shia LaBeouf once denied that he would be playing Indiana Jones’s son — but in all three cases, it was the anonymous sources, and not the filmmakers, who were telling the truth.

In any case, as ever, we will just have to wait and see which of the rumours — if any — turn out to be true in this case. But if the villain in this film is Khan, then that would be problematic, for reasons I spelled out two years ago, here. And if an Englishman like Cumberbatch is playing Khan, then that raises other potentially problematic issues, which Charlie Jane Anders at i09 discussed a couple months ago, here.

Me, I’m just hoping that at least part of what Faraci’s “informant” said two years ago is true, when he said that the film “won’t be focused on a traditional ‘villain’ type at all.” We haven’t had a villain-free Star Trek movie since the ’80s, and we are certainly overdue for another one. So if Abrams and company decided to honour this aspect of the TV show, then that would be pretty cool, actually.

Jul 14 update: Today Orci reiterated his claim that Cumberbatch is not playing Gary Mitchell, in an interview with TrekMovie.com. However, he did allow that Cumberbatch is playing one of the “canonical” characters, i.e. someone we have seen before in one (or more) of the previous movies and/or TV shows.

July 11, 2012
Peter O'Toole announces his "retirement" from acting
Next Post

July 14, 2012 Will Smith getting biblical with it... maybe.
Recent Comments
1 Comment | Leave a Comment
Browse Our Archives
get the latest from
FilmChat
Sign up for our newsletter
POPULAR AT PATHEOS Entertainment
1

Thunder Force Rumbles... but just a bit
Review of Netflix's "Thunder Force"
view all Entertainment blogs
What Are Your Thoughts?leave a comment
Copyright 2008-2021, Patheos. All rights reserved.
error: Content is protected !!