Will Smith getting biblical with it… maybe.

Will Smith getting biblical with it… maybe. July 14, 2012 Peter T. Chattaway 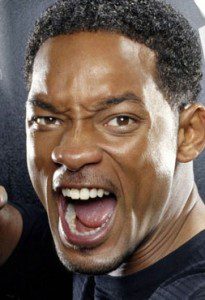 There has been so much buzz lately about Darren Aronofsky’s Noah and various other biblical projects in the works, that I almost forgot that Will Smith was attached to star in a movie about Cain a couple years ago. Yesterday, however, Deadline Hollywood brought it back to mind by reporting that Smith might not only star in the film, but direct it as well. (If he does, it would mark his feature directorial debut; his only previous turn in the director’s chair, as far as the IMDb is concerned, was for a 2006 episode of All of Us.)

There’s a twist, though. Two years ago, the movie was called The Legend of Cain and it was said that the film would be an “epic re-telling of the Biblical sibling tale, this time with a vampiric twist.” Whether that meant Cain himself was going to be the vampire, or simply someone who battles a lot of vampires (a la Smith’s similarly-named film I Am Legend), was never clarified, as far as I can tell.

Now, however, the movie has the working title The Redemption of Cain, and… there is no mention of vampires whatsoever. It is simply described as “a film about battling brothers Cain and Abel” — though that’s not to say that vampires won’t figure into the story somehow, when all is said and done.

Incidentally, this is not the only film with some sort of biblical tie-in on Will Smith’s to-do list. Last year, Paul Tamasy, one of the co-writers behind The Fighter, revealed that he and his writing partner Eric Johnson were developing a modernized version of the Book of Job for Smith, called Joe:

It’s about a man [who is living] the American dream. He’s got the nice house, white picket fence, great kids, great wife, nice cars. God and the devil get together every thousand years to bet on a man’s life, and the fate of the world is at stake.

What all of us get hit with in a lifetime, this man gets hit with in one week. And it’s about whether or not he can still pick himself up from that and survive it. It’s a dramedy. At it’s heart, it’s a comedy — but it’s got, obviously, a real dramatic core to it.

And four years ago, Smith hired Randall Wallace to write The Last Pharaoh, a film about the Nubian king-of-Egypt Taharqa, who gets a brief mention in the Bible during the Assyrian invasion of Judea.

Whether any of these projects will end up on the screen is an open question, of course. But it’s interesting to see that Smith keeps circling back to this sort of material.

July 19, 2012 Aronofsky's Noah may be even stranger than you thought.
Recent Comments
1 Comment | Leave a Comment
Browse Our Archives
get the latest from
FilmChat
Sign up for our newsletter
POPULAR AT PATHEOS Entertainment
1