Aronofsky’s Noah may be even stranger than you thought. 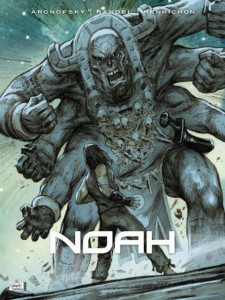 Most of the major characters have already been cast, but a few new actors have joined the cast of Darren Aronofsky’s Noah in supporting roles — and one of them’s a doozy.

Recent casting announcements have included Marton Csokas (Kingdom of Heaven) in an unspecified role, Dakota Goyo (Real Steel) as the young Noah and Barry Sloane as a “poacher” — but the one that catches my eye is the announcement that Kevin Durand (Legion) is playing “a watcher . . . one of the giants who helps Noah and his family.”

And what, exactly, is a “watcher”? Hitfix columnist Drew McWeeny, who has read the script, says they are “eleven-foot-tall fallen angels with six arms and no wings. They have a major presence in the script, and they’re fascinating. Early on, when Noah needs to go see his grandfather, he has to move through the homeland of the Watchers, something that is not easy to do.”

And yet it seems that the Watcher played by Durand, at least, will be one of Noah’s friends. And here’s where things get particularly interesting:

On the one hand, it looks like Aronofsky is basing a lot of his story on the Book of Enoch and perhaps other apocryphal texts — and in those texts, the fallen angels and their gigantic offspring are the source of much evil and corruption on the earth; indeed, the Flood itself is sent by God partly to wipe those beings out.

But in Aronofsky’s telling of the story, it looks like at least some of these “Watchers” — who appear to be both fallen angels and giants — will actually be helpers of Noah’s. Indeed, in a synopsis provided by Le Lombard, the French publisher that has already put out a series of comic books based on Aronofsky’s scenario, we read:

After consulting with his grandfather Methuselah, Noah decided to rally to his cause the terrible Giants and accomplish the task entrusted to him by the Creator…

So is the Flood no longer being sent to wipe the Watchers out? Or is the film going to suggest that the Watchers were, in fact, a source of evil and corruption on the earth, but that there were still at least a handful of them worth saving? Is Aronofsky following his source material here, or subverting it in some way?

Either way, I have to say I rather like the idea of Aronofsky pushing this story in a more “mythological” direction, full of bizarre creatures and whatnot. The early chapters of Genesis are pretty strange, and none more so than the chapter that introduces Noah himself. However the movie itself turns out in the end, full props to Aronofsky for reminding us of that much, at least.