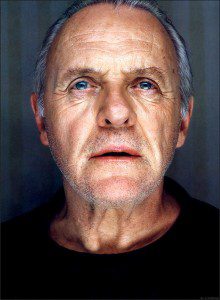 Darren Aronofsky has been talking about making a movie about Noah and the Flood for so long, I actually mentioned it several times at this blog before I went on my two- or three-year hiatus (most recently here, back in December 2008).

But in the past year or so — following the critical, box-office and awards success of Black Swan — Aronofsky has been making his dream a reality, with A Beautiful Mind co-stars Russell Crowe and Jennifer Connelly set to play Noah and his wife, plus Douglas Booth as Shem, Logan Lerman as Ham, Ray Winstone as Noah’s “nemesis” and Emma Watson as “Ila, a young woman who develops a close relationship with Noah’s son, Shem.” (Is she any relation to the Ila of Hindu tradition whose father, Manu, “saved mankind from the universal flood“? We shall see.)

This morning brought yet another bit of casting news: Aronofsky himself tweeted that Anthony Hopkins (who previously played St. Paul in the 1981 TV-movie Peter and Paul) has joined the cast as Methuselah — best known now as the man who lived longer than anyone else, according to the Bible, but also noteworthy for being Noah’s grandfather, and for dying around the same time the Flood happened.

Genesis 5 tells us that there were ten generations between Adam, the first human, and Noah, who built the Ark. Verses 25 to 31 say:

When Lamech had lived 182 years, he had a son. He named him Noah and said, “He will comfort us in the labor and painful toil of our hands caused by the ground the Lord has cursed. ” After Noah was born, Lamech lived 595 years and had other sons and daughters. Altogether, Lamech lived a total of 777 years, and then he died.

If you do the math, you’ll see that Lamech died while his own father, Methuselah, was still alive: if Methuselah was 187 when Lamech was born, and if Lamech lived to be 777, then he died when Methuselah was 964, or five years before Methuselah’s own death.

Now here’s where things get interesting: Genesis 7:6 says Noah was 600 years old when the Flood came — and this does not seem to be a mere round number, as far as the text is concerned, because Genesis 8:13 goes on to tell us that the flood waters dried up from the earth when Noah was 601.

So, did Methuselah die in the Flood itself? Who knows. ComingSoon.net, in passing Aronofsky’s tweet along, describes Methuselah to the effect that he is

the world’s oldest man mentioned in the Hebrew Bible who according to the story died seven days before the Great Flood.

The way that’s written, they almost seem to be implying that the Hebrew Bible itself says Methuselah died seven days before the Flood — but I am not aware of any such tradition. Is this, perhaps, a detail from Aronofsky’s own script that has somehow leaked out?

Either way, this movie just got a little bit more interesting to me.

Update: The Wikipedia entry on Methuselah says there is an extra-biblical tradition that Methuselah died seven days before the Flood began, and it notes that the medieval rabbi known as Rashi said “God delayed the Flood specifically because of the seven days of mourning in honor of the righteous Methuselah.” Whether this particular tradition has been incorporated into Aronofsky’s film, then, remains to be seen.

July 11, 2012 Peter O'Toole announces his "retirement" from acting
Recent Comments
6 Comments | Leave a Comment
"Animation would uniquely allow the creator to show the genitalia without getting into the waters ..."
Kellen The naked Christ in film: birth, ..."
"Gentlepersons:While I am a lifelong Christ-follower and served as Chaplain to a graduate program in ..."
Darrell A. Harris Exclusive: Patrick and Paul Aiello on ..."
"I know this is from 5 years ago, but I just got around to seeing ..."
digital bookworm Exclusive: Watch the trailer for Becoming ..."
"Thanks so much for making this list. I was thinking of doing something similar, but ..."
Bill Kudrle The Chosen — season one scripture ..."
Browse Our Archives
Related posts from FilmChat