Walter: a young man who thinks he’s the “son of God” 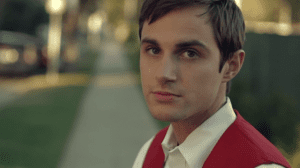 Deadline reports that a number of actors — including William H. Macy, Virginia Madsen, Peter Facinelli and Neve Campbell — have signed on to star in an “indie dramedy” called Walter, which concerns “a young man who believes that he is actually the son of God.”

The film — which is either being filmed right now, as per Deadline, or is already in post-production, as per the IMDb — is based on a 2010 short film of the same name, and, like the short film, it features Andrew J. West as the title character. The two films also share a screenwriter, though they are directed by different people.

You can watch the short film below (warning: some NSFW language). It basically concerns a guy who thinks it is his responsibility to decide the eternal fates of everyone he meets because he made a deal with God when he was a kid, and this was how he could guarantee that his own father would go to Heaven when he died.

Personally, while the theology suggested here is more than a little suspect (how can Walter believe that he is just one of many “sons of God” and that each of them has died for “everyone’s” sins? if even one “son of God” has already died for “everyone”, why would anyone else have to do that?), I am intrigued by the way the film links our hopes for our loved ones with our tendency to judge the fates of others, though obviously, because the film is so short, it doesn’t push this idea very far.

I can only wonder how the feature-length film will develop these ideas, but one sentence in the Deadline article (“Life becomes even more complicated when a mysterious figure appears who forces Walter to examine the true meaning of life.”) hints at a possible wrinkle that never comes up in the short film.

So, that’s one film to keep an eye open for. I’m betting it plays at Sundance.

July 4, 2013
Quick updates on Peter Gabriel and the Bible sequel
Next Post

July 8, 2013 Two months later... a few more thoughts on Star Trek into Darkness
Recent Comments
0 | Leave a Comment
"This was a refreshing read. I'm an average fan of Hellboy but I'm also a ..."
Andrew Mathews Doug Jones on Hellboy and Christianity.
"Great interview! One thing I've wondered since watching Season 1 is why they didn't include ..."
A.J. Cattapan Interview: The Chosen writer-director Dallas Jenkins ..."
"Earth actually does exist in the Dark City universe. Early in the film when John ..."
Edward Clint Dark City and the ambiguous ending.
"I don't always agree with your opinions, but your reviews are never less than interesting ..."
Laura-Lee Rahn The top-grossing Italian movie of 2019: ..."
Browse Our Archives
get the latest from
FilmChat
Sign up for our newsletter
POPULAR AT PATHEOS Entertainment
1