Hercules the latest ancient epic to come out in early 2014 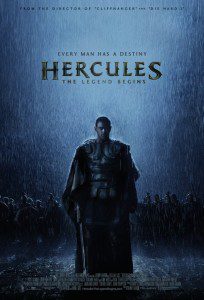 As a Bible-movie buff, I have paid quite a bit of attention at this blog to the three biblical stories that are hitting the big screen next year. But every now and then I like to take a step back and remember that these movies are part of an even broader trend involving ancient history and/or mythology.

Case in point: Summit Entertainment announced today that they have acquired distribution rights to Hercules: The Legend Begins and will release the film February 7. And that is only the first Hercules movies to come out next year, the other being a flick starring Dwayne “The RocK” Johnson that comes out July 25.

In addition to that, we also have the sequel to 300 coming out in the next few months, as well as a 3D movie about Pompeii. And this is all coming on the heels of recent Greco-Roman flicks like Clash of the Titans (2010), Immortals (2011) and Wrath of the Titans (2012), to say nothing of the Percy Jackson films (2010-2013), which are based on ancient Greek mythology but are set in the present day.

So if you integrate the biblical adaptations with the other films set in the ancient past, the release schedule for next year looks something like this:

There will also be glimmers of ancient history in the animated film Mr. Peabody & Sherman (March 7, Fox) — the posters for which show the time-traveling dog wearing hats and helmets from various historical periods, including those of ancient Egypt and ancient Rome — and there may also be some glimmers in Night at the Museum 3 (December 25, Fox), given that the first two films featured miniature Roman soldiers and an evil Pharaoh. But those aren’t really the same thing, natch.

And of course there are quite a few other ancient-set films in development right now, a few of which — such as Timur Bekmambetov’s Ben-Hur and Alex Proyas’s Gods of Egypt — could be ready to shoot as soon as this spring, or right around the time the bulk of next year’s ancient-set movies are coming out.

It is possible, I suppose, that if the films coming out in the next few months do poorly at the box office, then the studios behind the Bekmambetov and Proyas films could get cold feet and pull the plug on those films. But if these upcoming films are reasonably successful, then expect to see even more ancient-set films in the near future.

November 13 update: A review in The Hollywood Reporter today reminds me that there is another recent film which puts the Greek gods in a modern setting: Gods Behaving Badly, which was filmed over two years ago but just had its premiere at the Rome Film Festival. Based on the book by Marie Phillips, this film was originally going to be a TV pilot developed by Ben Stiller, but now it’s a feature film starring Christopher Walken as Zeus — and not a very good feature film, from the sound of it. There is no word yet on when (or if) the film will get a theatrical release.

November 15 update: Three days after Summit made the original announcement, they have moved the release date for Hercules: The Legend Begins from February 7 to January 10. The February release date put the film head-to-head with the animated Lego movie and with George Clooney’s The Monuments Men, but the January release date is apparently wide open, except for a few films in limited release (such as Lone Survivor and Spike Jonze’s Her) that are planning to go wider that weekend.

November 9, 2013
This could have been the weirdest Raggedy Ann movie ever
Next Post

November 13, 2013 The first officially released footage from Noah is here!
Recent Comments
0 | Leave a Comment
"Gentlepersons:While I am a lifelong Christ-follower and served as Chaplain to a graduate program in ..."
Darrell A. Harris Exclusive: Patrick and Paul Aiello on ..."
"I know this is from 5 years ago, but I just got around to seeing ..."
digital bookworm Exclusive: Watch the trailer for Becoming ..."
"Thanks so much for making this list. I was thinking of doing something similar, but ..."
Bill Kudrle The Chosen — season one scripture ..."
"Per Wikipedia: "In classical rhetoric and logic, begging the question or assuming the conclusion is ..."
Peter T Chattaway Review: The Most Reluctant Convert: The ..."
Browse Our Archives
Related posts from FilmChat

Disney Star Leigh-Allyn Baker on 'Family Camp': 'It...
In the new big-screen comedy “Family Camp,” Leigh-Allyn Baker (“Christmas in the...
view all Entertainment blogs
What Are Your Thoughts?leave a comment
Copyright 2008-2021, Patheos. All rights reserved.