The latest attempt to film all four gospels word-for-word 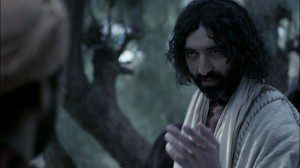 Every now and then, someone embarks on a quixotic quest to film the entire Bible, word for word. In the 1970s, the Genesis Project got as far as filming the books of Genesis and Luke, the latter of which was condensed into the Jesus film that is now distributed by Campus Crusade. More recently, there was the Visual Bible, which produced adaptations of Matthew and Acts in the 1990s and then, after a change of ownership, an adaptation of The Gospel of John in 2003.

Yesterday I came across what seems like a more modest project: an attempt to film all four gospels under the collective title the Lumo Project.

I discovered the project while checking out some video clips on my YouVersion Bible app. The app included clips from the Jesus film and the Bible miniseries, both of which I know very well, and to my mild surprise it also included some clips from the Lumo Project, which I didn’t think I had ever heard of before.

It turns out, though, that my friend Matt Page had mentioned an earlier version of this project at his blog three years ago, when it went by the names Big Book Media and The Liturgy Series, apparently depending on which territory it was released in.

Back then, according to Matt, the series consisted of fragments from the gospels — key moments from Jesus’ life and gospel readings from the lectionary — but to judge by the information on the Lumo Project website, it looks like Big Book Media has now partnered with an entity called Toy Gun Films to film the gospels in their entirety. The four films, one per gospel, will reportedly be finished sometime next year.

You can watch the clips here. They’re beautifully shot, and, as Matt notes, the clips manage to avoid the temptation that many other films have succumbed to, of casting a conventionally handsome actor as Jesus — as though his divinity could only be asserted by conforming to modern (and Caucasian) standards of physical beauty.

Incidentally, a more recent blog post of Matt’s raises an interesting question with regard to projects such as this one. In a post on The Bible, Matt notes that the Bible is a collection of books that represent different genres, different styles, and different conventions — but projects like The Bible, which adapt multiple stories, tend to smooth things out so that all of the stories are filmed the same way, thereby imposing a coherence on the stories that isn’t necessarily there in the original text.

This raises interesting questions for projects that aim to adapt all four gospels separately. Do you hire the same actor to play Jesus in all four films? Do you hire the same narrator? And what do you do with the strikingly different versions of certain events that appear in multiple gospels, such as the Last Supper?

A friend of mine once complained that the Jesus film did not show Jesus wearing a crown of thorns — but the Jesus film was based exclusively on Luke’s gospel, not the others. Should it have taken information from the other gospels into account? Certainly other films have done that: Pier Paolo Pasolini’s The Gospel According to St. Matthew (1964) took its script from Matthew but showed the Virgin Mary at the crucifixion, a detail that comes up only in John; similarly, The Gospel of John showed the baptism of Jesus even though that particular gospel never mentions it.

Based on the clips released so far, it certainly looks like the Lumo Project will aim for consistency as far as its visual style is concerned, and it may try to harmonize the gospels as much as possible, too. (A bit of footage from the brief reference to John the Baptist in one of the John clips is used in one of the clips from Matthew.)

So the Lumo Project is shaking things up just a little bit there, at least!

November 4, 2013 Bible movie of the week: The Big Fisherman (1959)
Recent Comments
0 | Leave a Comment
""AD" stands for "Anno Domini", a Latin expression meaning "In the Year of Our Lord".So ..."
Peter T Chattaway The Chosen — season one, episode ..."
"Why does it say at the start of episode 3 that it takes place 26 ..."
Desiree Chamberlain The Chosen — season one, episode ..."
"What about Hellboy, The Grudge, Ghoulies, and Anaconda?"
45th Spiderbob Group VGCP When R-rated franchises go PG-13 …
"Not yet, but I might do something like that once Season 2 is complete."
Peter T Chattaway The Chosen — season one scripture ..."
Browse Our Archives
get the latest from
FilmChat
Sign up for our newsletter
POPULAR AT PATHEOS Entertainment
1