Oscar nominations — my own two bits, and a complete list 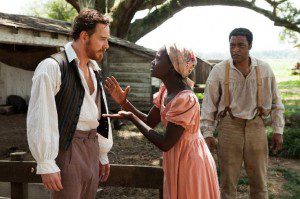 It is extremely rare for a film to win Best Picture without also being nominated for its director, its film editing, and its screenplay. So it looks like this year’s top Oscar will go to either the frivolous but entertaining American Hustle, which scored 10 nominations altogether, or the serious and historically significant 12 Years a Slave, which scored nine.

Between American Hustle and last year’s The Silver Linings Playbook, director David O. Russell has pulled off the neat trick of getting nominations in all four acting categories for two years in a row. This had happened only 13 times prior to Russell’s films, and while no film has ever won all four acting categories, all but two of the 14 films so nominated in the past have won at least one of the acting awards (the sole exceptions being 1936’s My Man Godfrey and 1950’s Sunset Boulevard).

Gravity is also up there with 10 nominations, including nods for directing and editing — but it has no screenplay nomination, so that pretty much seals the film’s fate.

Beyond that, here are a few points that jumped out at me; I may notice other oddities and curiosities later, especially as I read the comments of other Oscar watchers:

First, an independent Christian film I had never heard of before, called Alone Yet Not Alone, was nominated for its title song — which is apparently sung in the film by Joni Eareckson Tada. (If the name rings a bell, it might be because she’s the quadriplegic whose life story was turned into a Billy Graham movie — one of his best, actually — back in 1979.) Strictly speaking, this might not be the first time an independent Christian film has been nominated for an Oscar — the 1953 film Martin Luther, which was nominated for cinematography and art direction, comes to mind — but still, as far as recent evangelical efforts go, it feels like some sort of precedent has been set here. Incidentally, does this mean Joni will get to sing at the Oscar ceremony?

Second, three of the year’s top-grossing computer-animated films (The Croods, Despicable Me 2, Frozen) were nominated for Best Animated Feature, but the year’s one Pixar film (Monsters University) was snubbed in favour of a couple of hand-drawn foreign films (Ernest & Celestine, The Wind Rises). Pixar’s The Blue Umbrella was also shut out of the Best Animated Short category, but we’ve known that ever since the shortlist for that category was released back in November.

Third, it’s striking to see that Wong Kar-wai’s The Grandmaster was shut out of the Best Foreign Language Film category, when it’s the only non-English live-action non-documentary feature-length film that was nominated in any of the other categories (namely cinematography and costume design).

Fourth, The Hobbit: The Desolation of Smaug ties last year’s The Hobbit: An Unexpected Journey for least nominations of any Peter Jackson film set in Middle-Earth. An Unexpected Journey ended up losing in all three categories, so it’s not impossible that The Desolation of Smaug could too. It’s quite the comedown from a decade ago, when all three Lord of the Rings films were nominated for Best Picture (as well as dozens of other awards), and the third film actually won.

Here are the feature films that have been nominated for Oscars, from those with the most nods to those with only one. The titles of those I have seen are in bold:

January 14, 2014
A last-minute casting change to Aronofsky's Noah?
Next Post

January 16, 2014 Oscar winners slipping at the box office -- 2013
Recent Comments
0 | Leave a Comment
Browse Our Archives
get the latest from
FilmChat
Sign up for our newsletter
POPULAR AT PATHEOS Entertainment
1