The Oscars rescind nomination for Alone Yet Not Alone 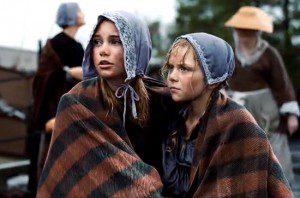 Whoa. The organization behind the Oscars has “rescinded” the Best Original Song nomination for the title song to Alone Yet Not Alone. The official reason given is that composer Bruce Broughton, one of the Academy’s former governors and an executive committee member of the Academy’s music branch, went too far when he sent e-mails to members of the music branch to let them know his song was out there and eligible for a nomination. This, it seems, violated the Academy’s rules against excessive campaigning.

It’s pretty rare for the Academy to rescind a nomination outright. Looking at the precedents cited by The Hollywood Reporter and Entertainment Weekly, there may have been as few as six rescindments in the past, depending on how one defines these things. And now Alone Yet Not Alone has joined that list.

Interestingly, the movie had already survived another challenge to its eligibility for this award. The Hollywood Reporter claimed last week that the people behind an unnamed “rival” song had challenged the eligibility of ‘Alone Yet Not Alone’ on the basis that the filmmakers had not purchased advertising for the film’s one-week Oscar-qualifying run at a Los Angeles theatre. In that case, the Academy ruled that a showtime listing purchased by the theatre met the advertising requirement.

So the people behind the “rival” song challenged Broughton’s nomination on the basis that the film had not been promoted enough, while Broughton ultimately lost the nomination because it was determined that the song itself had been promoted too much, within a certain group. Make of that what you will.

As it happens, Studio System News posted an interview with Broughton earlier today in which he said he had kept “a definite eye on the Academy rules” and was “respectful of the conditions”. He also said he sent the note to his colleagues mainly because independent films like Alone Yet Not Alone don’t have “the marketing, publicity, or financial ability to get the song forward. . . . I just didn’t want the song to be bypassed.”

Everybody works the system—certainly the major marketing machines do. I told people there was a song out there but didn’t ask anyone to vote and didn’t make any phone calls or a marketing campaign. It’s sort of taken my breath away to see some of the things that have been written. Nobody can force anyone to vote for their song. Really you just hope for the best.

This raises an interesting question: Would the Academy have rescinded the nomination if the film were better-known or better-connected, and not an obscure Christian independent film (let alone an independent film that openly associates itself with social-conservative, religious-right types)?

There are two key words in that question: “Christian” and “independent”.

But some people will prefer to emphasize the word “Christian”. For them, the fact that Alone Yet Not Alone has been “robbed” of its nomination will be taken as evidence that Hollywood was determined to keep a right-wing religious flick out of the awards ceremony. (It certainly didn’t have a chance of actually winning the award, not with Disney’s Frozen in the mix.)

So I expect to hear a lot of grousing about this in the next few days. The Academy may or may not have ruled correctly when it comes to Broughton’s e-mails. But it probably, however unintentionally, just gave certain Christians a little more fodder for their persecution narrative, and thereby threw just a little more fuel on the culture-wars fire. Sigh.

Update: The second paragraph, about previous rescindments, has been revised a couple times to reflect new information as it comes up in other stories.

Upperdate: Bruce Broughton has responded to the rescindment in a statement to The Hollywood Reporter: “I’m devastated. I indulged in the simplest grassroots campaign and it went against me when the song started getting attention. I got taken down by competition that had months of promotion and advertising behind them. I simply asked people to find the song and consider it.”

The Reporter also notes that the Academy has allowed other films to take the place of films that had their nominations rescinded in the past, however this time the Academy will let the number of Best Original Song nominees drop from five to four.

January 29, 2014 Family and fallen angels in the Noah Super Bowl TV spot
Recent Comments
9 Comments | Leave a Comment
"Gentlepersons:While I am a lifelong Christ-follower and served as Chaplain to a graduate program in ..."
Darrell A. Harris Exclusive: Patrick and Paul Aiello on ..."
"I know this is from 5 years ago, but I just got around to seeing ..."
digital bookworm Exclusive: Watch the trailer for Becoming ..."
"Thanks so much for making this list. I was thinking of doing something similar, but ..."
Bill Kudrle The Chosen — season one scripture ..."
"Per Wikipedia: "In classical rhetoric and logic, begging the question or assuming the conclusion is ..."
Peter T Chattaway Review: The Most Reluctant Convert: The ..."
Browse Our Archives
Related posts from FilmChat