Noah news round-up: a big opening in South Korea, a look at the Jewish myths behind the film, and more

Noah news round-up: a big opening in South Korea, a look at the Jewish myths behind the film, and more March 20, 2014 Peter T. Chattaway 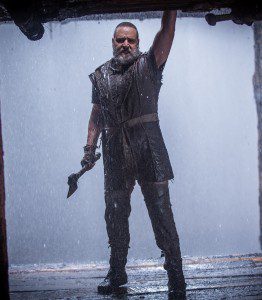 Well what do you know, Darren Aronofsky’s Noah is already playing in theatres and raking in the big bucks… in South Korea.

Various sources are reporting that the film opened there on Thursday (which might mean yesterday, given that it’s on the other side of the international date line), and that its first-day gross was on par with that of films like Gravity and Inception. I imagine those particular examples are cited because they were big hits that, like Noah, did not have the advantage of being sequels or part of a franchise.

Amusingly, The Hollywood Reporter suggests that the film owes part of its success to the fact that South Korea “has a large Christian population”, while Variety notes that “a large percentage of the South Korean population is agnostic”. Well, there’s no reason the film couldn’t be playing to both audiences.

The film opens in Mexico tomorrow, and in much of the rest of the world the week after. The first reviews should be online by tomorrow (hint, hint).

In other news, the last time we checked in with the promotional tour, Aronofsky had gone with a couple of the actors to a premiere in Madrid, while Russell Crowe had made his first public appearance in support of the film at a premiere in Moscow. Since then, Aronofsky has attended a premiere in Iceland, and he then popped down to Rome to attend one of the Pope’s general audiences with Crowe — the first time Aronofsky and Crowe have appeared together during the film’s promotion.

You might recall that there was a lot of sound and fury a few days ago over whether Pope Francis and his team had nixed a meeting with the filmmakers. The reports coming from Rome indicate that the Pope might have met them personally, after addressing the crowds, but if he did, it was very brief, and no photos were taken. A Vatican spokesman downplayed the whole thing, telling the Associated Press the filmmakers “could have been at the audience like anyone else.”

Crowe is now in Rio de Janeiro, for the film’s Brazilian premiere tonight.

While the director and the leading man are touring the world, at least one of the other actors has returned to North America to drum up awareness for the film. Jennifer Connelly appeared on Good Morning America this morning to talk about the film, and along the way they played a clip from the film that has not appeared anywhere else yet, as far as I can tell, in which Noah tries to persuade Naameh that the wickedness in Tubal-Cain’s camp exists within each member of their own family, too.

Meanwhile, Emma Watson has an interview in The Telegraph, from Calcutta, in which she describes how she auditioned for the part of Noah’s daughter-in-law Ila:

The auditioning process was a challenge. Before my audition he sent me one page of the script, which I performed and then he said ‘Okay, you did alright with that’ and then he handed me another three pages and said, ‘I’m going to leave you alone for five minutes and then you get to do it’. And so you can imagine when he left me alone for those five minutes how I was feeling. But it was fun and I’ve never produced real tears in an audition environment before, but I did with Darren.

It’s incredibly difficult because you’re not in costume, there are strangers in the room, there’s a cameraman you’ve never seen before and it’s your first time doing it. And yes, I was crying my eyes out by the end of the audition!

And now, turning to how the film was developed in the first place, The Jewish Week has one of the first stories I’ve seen that takes a good look at the film from a Jewish perspective. Among other things, it highlights the role that Rabbi Geoffrey Dennis, an expert on Jewish myth, played in advising the filmmakers:

Aronofsky has admitted that “Noah” was being written by “two not very religious Jewish guys,” so Handel was calling Rabbi Dennis, author of the “Encyclopedia of Jewish Myth, Magic and Mysticism” (Llewellyn Publications), and a 2007 National Book Award finalist, to give a Jewish sense of the story.

“If you look at the trailer,” says the rabbi, “there’s a moment when Noah strikes the ground with a flaming sword. I spoke to them about Methuselah, Noah’s grandfather, who had a sword inscribed with God’s name. He used that sword to tame demonic spirits that were tormenting humanity.” This was not the angel’s flaming sword that guarded the Garden of Eden, “but they may have fused the two” because the sword in the trailer is flaming.

Also interesting, in light of the controversy over Aronofsky’s decision to explore Noah’s dark side, is this bit from the article:

The tradition, says Rabbi Dennis, negatively compares Noah to Abraham and to Moses. However, the kabbalistic text “Shaar HaGilgulim” teaches that Moses is the “gilgul” and “tikkun,” the “reincarnation” and “fixing,” of Noah. Both were given a covenant. Both were saved by floating on water. (In Hebrew, the word for “ark” and Moses’ “basket” are the same, “teva.”) The time of the flood is echoed at Sinai where it was raining at the time of the Revelation, among another half-dozen similarities.

Meanwhile, Aronofsky himself has an written an article on why he made the film (and curated a Noah-themed art show) for T: The New York Times Stye Magazine:

When I asked Russell Crowe to star in “Noah,” I promised him one thing: I would never shoot him standing on the bow of a houseboat with two giraffes sticking up behind him. That’s the image most people have of Noah and the ark and I didn’t want to give audiences what they were expecting. I wanted to break the clichéd preconceptions we have from children’s toys, adverts, 1950s biblical epics and even much of the religious art of the last two millennia: the old man in a robe and sandals with a long white beard preaching in some Judean desert. I wanted Noah’s story to feel fresh, immediate and real. So when my team and I started to imagine how to bring the prediluvian era to life, we threw away all the tropes and returned to the Bible. . . .

Attached to the article are four images from the art show, most if not all of which have not appeared online yet, as far as I’m aware.

In other news, Time magazine has an article (for subscribers only) on Jonathan Bock, the founder of Grace Hill Media, a company that has been helping Hollywood studios market their films to Christian audiences for the past 14 years:

In the months leading up to the March 28 release of Noah–the biblical epic by writer-director Darren Aronofsky, starring Russell Crowe–Paramount Pictures screened half a dozen versions of the film, some more overtly religious than others. The studio discovered something surprising: people didn’t really know the story. And it wasn’t merely nonbelievers who had misconceptions about the tale of a man who built an ark to survive a great flood. It was Christians too.

“In some of the screenings, there were people who expressed concerns because Noah got drunk,” says Jonathan Bock, founder and president of marketing firm Grace Hill Media. “Well, that’s in the Bible. We had people talk about the townspeople making fun of Noah for building an ark. Well, that’s not in the Bible.”

Below the Line News has an article on LOOK Effects, a company that produced 300 visual-effects shots for Noah.

And finally, The Washington Times has a story on conservative Christian anxiety over Noah, which includes a bizarre statement from “Dr.” Ted Baehr to the effect that Aronofsky “probably is trying to sabotage the movie”.

That’s in reference to the fact that Aronofsky has been saying the sorts of things that people like Rick Warren don’t like. But I find it very, very hard to believe that someone as passionate about this film as Aronofsky could possibly be trying to undermine it. (And I say this as one who has interviewed him. For more on that, stay tuned.)

March 20, 2014 First impressions: Noah (dir. Darren Aronofsky, 2014)
Recent Comments
0 | Leave a Comment
"Not yet, but I might do something like that once Season 2 is complete."
Peter T Chattaway The Chosen — season one scripture ..."
"Is there a PDF or printable version of this extensive list? I would love to ..."
Liza The Chosen — season one scripture ..."
"What a strange article. Using movies as your basis to defend that Lazarus was murdered ..."
Mark Ross DeFazio The death, resurrection, and second death ..."
"Another with Ethiopian eunuch and Philip https://archive.org/details..."
Jason McKahan Watch: Philip is the original vanishing ..."
Browse Our Archives
get the latest from
FilmChat
Sign up for our newsletter
POPULAR AT PATHEOS Entertainment
1

First Look: The Steven Spielberg Remake of 'West...
During the 93rd annual Academy Awards on Sunday evening, the first trailer...
view all Entertainment blogs
What Are Your Thoughts?leave a comment
Copyright 2008-2021, Patheos. All rights reserved.
error: Content is protected !!