Noah news round-up: snubs from church leaders, props from Christians who have seen the film, and more 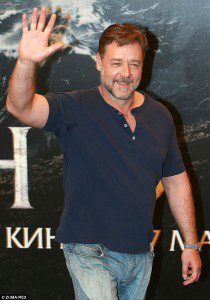 The European promo tour for Darren Aronofsky’s Noah soldiers on. Following the film’s Berlin premiere on Thursday, the filmmakers went to Madrid for another premiere tonight, while Russell Crowe attended his first Noah premiere at the other end of Europe, in Moscow; he had missed the previous events because he was shooting a movie in Turkey.

Alas, the European tour has already encountered one hiccup of sorts: Variety reported today that the Vatican has cancelled tentative plans for a photo op that would have featured Pope Francis and a few of the filmmakers, including Crowe and Aronofsky.

Crowe, via Twitter, had been openly asking the Pope to screen the film for a few weeks now, and the Vatican reportedly gave the idea enough consideration to set some time aside for a meeting on Wednesday; but they eventually decided against it because Crowe’s presence would be too distracting to the Vatican’s other visitors.

The studio, however, has denied the story, and told The Hollywood Reporter that a meeting with the Pope was proposed by the studio but “never scheduled.”

Interestingly, Aronofsky himself has cited the Pope and his message as one of the reasons why people might be interested in his film.

In a video from the world premiere in Mexico City last Monday that went online today, Aronofsky tells one of the red-carpet interviewers: “The Pope is talking about how we should be stewards of the environment, of creation, and if you think about it, Noah was the first one to go out and save the animals, save the environment.”

While the film has not yet been rated in Canada or the United States, it has been rated 12A in Great Britain, which will get the film on April 4, one week after it opens in North America. The British Board of Film Classification notes that the film runs 138 minutes, and gives it a warning of “moderate violence, injury detail, threat”.

Meanwhile, i09 has posted an interview with Aronofsky and his co-writer/co-producer Ari Handel in which they talk about both the film and the graphic novel that was based on an early draft of the script and is coming out tomorrow:

io9: What’s your fascination with the Noah story?

Darren Aronosky and Ari Handel: Destruction by water — everything we know being washed away, but also everything being cleansed — we think that’s universally fascinating. There’s a reason why so many religions and cultures have flood narratives. It’s a fundamental story. . . .

The graphic novel is beautiful, thanks to Niko Henrichon’s art. How much has the comic informed the design of the film?

For the most part the design of the film and the graphic novel developed in isolation from each other. Niko really had a lot of freedom to draw the story as he saw it. In one or two instances, like the Ark itself, we gave Niko some design ideas we were developing with for the film, but mostly they are two separate works.

Story-wise, how closely will the finished movie resemble the graphic novel? Are there any significant changes?

The graphic novel is based on a first draft of the Noah script. While Niko was working and drawing based on that early draft, we kept on writing and refining for a few years before we started filming, so the two stories diverged quite a bit. Of course they both track along with the story in Genesis so they have a lot in common — and the themes and characters have remained very much in line. But scene to scene there are a lot of differences.

Is there anything in the comic you were unable to bring to the screen?

Obviously, film and comics are different media. For film there are some things, especially with vast landscapes and intricate sets, that are hard to do photographically or even with visual effects. But Niko does everything with his pen, so he was only limited by his imagination. Probably the biggest thing that’s in the comic that isn’t in the film is being able to go inside a city full of the wickedness of men. . . .

In other interview news, Flicks and the City posted the following set of soundbites from the red carpet in Berlin last week, and one of the more intriguing quotes comes from Ray Winstone, on how he tried to find a sympathetic side to the villainous Tubal-Cain. “This man wanted to save humanity in his own way,” he says:

Meanwhile, we’ve seen a flurry of new opinions and op-ed pieces regarding the film.

First, Rick Warren — who played a big part in promoting Son of God and even said people should skip church to see that film — slammed Noah via his Twitter and Facebook accounts yesterday. He subsequently deleted the Facebook post and one of his tweets, but the following fragment survives on Twitter:

Director of new “Noah” movie calls it “The LEAST biblical film ever made" then uses F word referring to those wanting Bible-based,

The Director of new ‘Noah’ movie calls it ‘The LEAST biblical film ever made.’ The director then insulted millions of potential viewers by using the F word. Thanks for the warning Mr. Director. You just saved me from wasting my money.

There are a few big problems with Warren’s comments here.

First, the misquote. What Aronofsky actually said was that his film is “the least Biblical Biblical film ever made.” Note his double usage of the word “Biblical”. He is clearly using the word in two different ways: one, to signify that the film is based on the biblical text (which it is), and two, to signify that his film marks a major departure in style from the biblical adaptations of the past (which it does).

The most prominent big-screen adaptation of the Noah story to date is probably the one directed by and starring John Huston, in The Bible: In the Beginning… (1966), and that film plays into many of the Sunday-school tropes that Aronofsky is consciously shying away from (the Ark as a cuddly zoo, and so on). I happen to like Huston’s film, but I think Aronofsky’s film is a valid take on the story, too.

Second, the profanity. As someone noted on Twitter, U2’s Bono cusses all the time and is loved by many Christians anyway, so why can’t Aronofsky?

More to the point, Aronofsky did not use the f-word in reference to “those wanting Bible-based” films. In the most widely-reported instance where he used the f-word, he wasn’t addressing American evangelicals at all. Instead, he used that word when speaking to the audience at the film’s world premiere in Mexico, to emphasize that his film would be different from what they might be expecting. (Again, he was emphasizing the difference between his film and the Bible movies of the past.)

Third, Warren’s declaration that he will not “waste money” on the film. His statement clearly suggests that any Christian who does see the film would be wasting their money. And if Warren played any part in boosting Son of God’s grosses ($50 million and counting), then he arguably could play a part in hurting Noah’s.

But it’s more than a little irresponsible for Warren to go around undermining the movie when he hasn’t actually seen it yet — especially if he’s doing so on the basis of two short quotes from the director that have been yanked out of context.

Enough about Warren. Now let’s turn to two Christians who have seen the film.

Scott Landry of Catholic Online offers eight reasons why Catholics should see the film. The full explanations are in his post, but the point-form bullet points are these:

Meanwhile, Jonathan Merritt of Religion News Service asks why the same evangelicals who are complaining about the film’s lack of “biblical accuracy” were so quick to proclaim the “accuracy” of other biblical adaptations — such as The Passion of the Christ and The Bible — that were somewhat loose with the text themselves:

Why the double standard?

The difference is that some of the other biblical productions were made for Christian audiences by Christian filmmakers as evangelistic tools. In some cases, the forces behind these movies kissed the rings of evangelical gatekeepers, convincing them to use church budgets to buy entire theaters on opening weekend and generate ticket sales with film-inspired Sunday School curriculum and sermon series.

Or, as I have written before, some people would rather treat films as tribal boundary markers than engage with them in any sort of meaningful way. Merritt concludes:

Like other artistic endeavors drawing on biblical themes, “Noah” requires that audiences actually think about symbols and forms. Aronofsky adds elements to Noah’s story, for example, that reflect the grief God must have felt over having to destroy creation. The movie doesn’t get every detail right, but it captures the spirit of the scriptural narrative and the character of God displayed therein. If approached as an artistic work, “Noah” will ignite audience’s imaginations and raise profound questions about sin, grace, mercy, and faith. So inconsistent Christian critics should stop raining on this film’s parade lest they become the ones who miss the boat.

On a much more glib note, Kathleen Parker of the Washington Post basically asks why people are taking the film so seriously when it’s just a commercial product “intended to entertain, inspire and — bear with me, I know this is crazy — make money.”

She also repeats the canard that the National Religious Broadcasters threatened a boycott of the film, which NRB chief Jerry Johnson insists they did not.

Finally, Aronofsky has tweeted a few new images from his Noah-themed art show, and I have added them to the collection at the bottom of this post. Whew.

Update: The Harry Potter fansite Snitchseeker has rounded up some more photos and videos from the Berlin and Madrid premieres. Also, I have revised the first paragraph to reflect more accurately who was at which premiere today.

March 18, 2014Noah news round-up: novelizations, ratings, and more
Recent Comments
2 Comments | Leave a Comment
Browse Our Archives
get the latest from
FilmChat
Sign up for our newsletter
POPULAR AT PATHEOS Entertainment
1