Of course Noah isn’t “biblically accurate”, nor should it be.

Of course Noah isn’t “biblically accurate”, nor should it be. October 23, 2013 Peter T. Chattaway 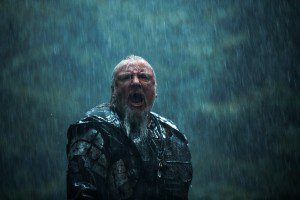 Last week, The Hollywood Reporter claimed — on the basis of reports from unnamed “sources” — that a conflict was brewing between Paramount Pictures and Darren Aronofsky over how to edit the upcoming Bible movie Noah.

Aronofsky, an obsessive director of movies about obsessive people — and a director who had worked almost exclusively on low-budget indie movies prior to this — reportedly wants to stick to his original, and somewhat subversive, take on the story. Paramount, on the other hand, is reportedly getting nervous about the “troubling” and “worrisome” response to the film at various test screenings, and so, eager to protect their $125 million investment, they want to make some changes to the film that would make it more palatable to audiences in general — and to the religious audience in particular.

Now Fox News has posted its own story on the controversy, and their anonymous source, as summarized by the reporter, has apparently claimed that Paramount wants to make the film “as biblically accurate as possible”.

Beyond that, the alleged “insider” also told Fox News that “Paramount is trying to keep [the film] on track.”

First, Aronofsky is not making this film as a favour to Paramount. He is not a director-for-hire who became attached to a project that the studio was already working on (the way that, say, Ridley Scott got involved with the life-of-Moses movie Exodus over at 20th Century Fox). Noah is a passion project that Aronofsky has wanted to make since he was in high school. He co-created a graphic novel about Noah to show what a film of his on this subject might look and feel like. He wrote a screenplay on spec that formed the basis for the film that Paramount eventually agreed to make. If anyone knows whether the film is “on track” or not, it is Aronofsky, not the studio.

Second, this is not a Christian story, except to the extent that the Christian scriptures include the Jewish scriptures and thus include a story about Noah as well. This is a fundamentally Jewish story that has been developed quite extensively in the Jewish tradition — through apocryphal scriptures, rabbinic literature, and so on — and since Aronofsky himself is Jewish, I am quite keen to see how he adds to this tradition. If evangelical Protestants can go nuts for a deeply Catholic film like The Passion of the Christ (2004) — which amplifies the role of the Virgin Mary while adding some uniqely Mel Gibsonian elements — then surely they can, at least in theory, accept a movie about Noah which reflects both centuries of Jewish tradition as well as the themes and concerns that are of particular concern to its own director.

Now, this is not to say that the themes and concerns that are of particular concern to Aronofsky will resonate with evangelical audiences, let alone that evangelical audiences will agree with his treatment of those themes and concerns. But, provided that Aronofsky does not use the movie to contradict the Bible outright — and the script I have read suggests that he will not do this — then surely we can learn from a film that challenges some of our preconceptions about this story. Surely we can learn from a film in which Noah becomes so obsessed with following what he believes to be God’s will that he begins to do things that are, in the words of Noah star Russell Crowe, “not even nice.” Noah is a flawed character, even in the Bible, so instead of complaining about the movie character’s flaws, as it seems some test audiences are doing, why not use those flaws as a springboard to think about the ways in which we sometimes overinterpret God’s will for our lives, or the lives of others?

Now, to be sure, the movie does seem to have a number of “inaccuracies”. To cite a trivial example, the Bible says Noah’s son Shem was almost 100 years old when the Flood happened, but in the movie he’s played by 21-year-old Douglas Booth. And while the Bible says all three of Noah’s sons took wives with them aboard the Ark, only one of them does in the script that I read. And yes, it does seem that the film will indicate that mankind was punished partly for what evangelicals might call its poor stewardship of Creation, which the Genesis story never even mentions. But on the basic points — that fallen mankind was violent and sinful, that God sent a Flood as punishment, and that God is the ultimate source of both justice and mercy — there is no disagreement between the Bible and the film that I have detected so far.

Now, admittedly, the studio may have raised some false hopes here.

When Paramount first announced that it was financing Aronofsky’s film in April 2012, those of us who were at least vaguely familiar with Aronofsky’s graphic novel scratched our heads at the declaration, in Paramount’s press release, that the film would be “a close adaptation of the Biblical story”. And that was before movie bloggers started posting reviews of the screenplay, pointing out its deviations from the text and some of its more wildly creative elements! Did Paramount not know what was in Aronofsky’s script, or did they not know what was in the Bible? One thing is clear, at any rate: Paramount was marketing the film with an eye towards the “Passion dollars” audience from the get-go — and they might have over-sold it.

That over-selling, incidentally, continues in the trailer that has been shown at various Christian conferences — and which was leaked to the internet literally as I was writing this post. (You can currently watch it at Gawker, though probably not for long.) The trailer plays up Noah’s one-man-against-an-army heroism, without giving any hint of the “dark, complicated” aspects of the character that Aronofsky has been talking about for years, and the second half of the trailer is set to a worship song by Kim Walker-Smith — as if to say the studio was actively trying to make Noah look like just another crappy Christian movie, albeit one with a large visual-effects budget.

And now, supposedly, the studio is going to try to make the film more “biblically accurate”. And that’s a huge problem, for at least three reasons.

First, who trusts a movie studio to make a movie “biblically accurate”? Especially a movie studio that had already looked at Aronofsky’s script and declared, on that basis, that the movie would be a “close” adaptation of the biblical story?

Second, there is the theological problem of insisting on “biblical accuracy” in adaptations of the Bible when even the Bible itself isn’t always “biblically accurate”. Just look at the four gospels, and how they disagree on various points, and how they sometimes borrow from each other (and the Old Testament) while making slight changes to the bits they borrow. (To cite one of the more obvious examples, the very first chapter of the New Testament says there were 14 generations from David to Jeconiah, but the Old Testament says there were 18.) That sort of thing is perfectly acceptable within the writing conventions that existed when those scriptures were written. But the mindset which insists on “biblical accuracy” above all is likely to miss what the authors were trying to say to us through the changes that they made.

Third, as I wrote nine years ago, there is the artistic-appreciation problem:

I wrote that in response to the hype surrounding The Passion of the Christ — and I quoted it earlier this year during the run-up to The Bible — but it applies to other films as well. We need to keep our thinking caps on. We need to be sensitive to the nuances of different adaptations of the biblical story. Instead of treating films as boundary markers — where this film is approved for uncritical consumption by “our” group, while that film is dismissed out of hand as one of “their” films — we need to be able to approach each film with a willingness to discern which bits come from the Bible, which bits don’t, and how God might be speaking to us through both.

So, let’s hope the studio allows Aronofsky to make his film the way he envisioned it. And let’s hope that Christian audiences, instead of demanding a piece of mindless entertainment that leaves their souls untouched, will allow the film to challenge their ideas about faith, love, justice, mercy, stewardship, heroism and all the rest of it — assuming, of course, that the film is good enough to warrant that sort of attention.

October 22, 2013
Our first glimpse of Christian Bale as Moses in Exodus
Next Post

October 24, 2013Ben-Hur remake gets a rewrite, starts shooting in spring
Recent Comments
4 Comments | Leave a Comment
""AD" stands for "Anno Domini", a Latin expression meaning "In the Year of Our Lord".So ..."
Peter T Chattaway The Chosen — season one, episode ..."
"Why does it say at the start of episode 3 that it takes place 26 ..."
Desiree Chamberlain The Chosen — season one, episode ..."
"What about Hellboy, The Grudge, Ghoulies, and Anaconda?"
45th Spiderbob Group VGCP When R-rated franchises go PG-13 …
"Not yet, but I might do something like that once Season 2 is complete."
Peter T Chattaway The Chosen — season one scripture ..."
Browse Our Archives
get the latest from
FilmChat
Sign up for our newsletter
POPULAR AT PATHEOS Entertainment
1