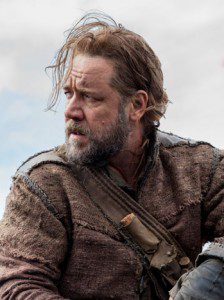 This blog has spent quite a bit of time speculating on the broad narrative contours of Darren Aronofsky’s Noah: What mix of biblical and apocryphal texts will it use? Which characters will it include? What connections will it have to the flood mythologies of other religions, such as Hinduism?

But one thing I haven’t looked at much is how the film will depict Noah himself. I have quoted something Aronofsky said six years ago — long before the movie was in active development — about Noah being a “dark, complicated character” with lots of “survivor’s guilt”. But that’s been about it.

Now we have some new insight into the character, courtesy of Russell Crowe, who told Entertainment Tonight recently (while promoting Man of Steel) that the Noah he plays will not be the “benevolent” figure that some viewers might expect:

“The funny thing with people, they consider Noah to be a benevolent figure because he looked after the animals: ‘Awww, Noah. Noah and the animals.’ It’s like, are you kidding me?” he says with a laugh. “This is the dude that stood by and watched the entire population of the planet perish.”

Darren Aronofsky directs the biblical epic in which the classic character is given a divine mission: to build an ark to save creation from the coming flood, and Crowe continues, “He’s not benevolent. He’s not even nice. At one point in the story his son says, ‘I thought you were chosen because you were good?’ And he goes, ‘I was chosen because I can get the job done, mate.'” . . .

Looking forward to people’s reactions to the new movie, Crowe says, “I think people are going to be judging where their questions are coming from. I think they’re going to be quite surprised what Noah actually means; what it means to be in that position.”

Now, it could be that Crowe is just playing with our expectations, the way he did when he told reporters, in 2007, that the Robin Hood movie he was starring in for Ridley Scott would look at how a dastardly figure called “Robin the Beheader” had morphed into the heroic figure we now think we know and love. When the finished film came out nearly three years later, it didn’t have anything to do with that at all.

Of course, when Crowe spoke about that film, it was still going through rewrites — whereas Noah has already been written and filmed and is now just going through the editing process. So presumably Crowe has a better sense of how this character will be portrayed when the finished film comes out in March of next year.

The other thing that comes to mind is that Christian novelist and screenwriter Brian Godawa wrote a lengthy critique of Aronofsky’s screenplay just over seven months ago which included a section headlined “Psycho Noah”. That section begins:

Perhaps one of the most disturbing aspects of the Aronofsky/Handel script is its portrayal of God in the moral worldview of Noah. I’m not talking about the fact that Noah is sinful in the movie or that he gets drunk. That is in the Bible. That’s not the problem. The problem is that Noah is depicted as attempting to follow God’s will in the script, a will that includes the complete annihilation of the human race, as opposed to the Genesis depiction of starting over with eight humans to repopulate and ultimately provide a Messiah.

I have not yet gotten around to reading Godawa’s critique in detail, but if you want to get a sense of what Crowe is hinting at here, you might want to check that out.

June 9, 2013 Jesus section of The Bible now a 135-minute movie
Recent Comments
0 | Leave a Comment
"Animation would uniquely allow the creator to show the genitalia without getting into the waters ..."
Kellen The naked Christ in film: birth, ..."
"Gentlepersons:While I am a lifelong Christ-follower and served as Chaplain to a graduate program in ..."
Darrell A. Harris Exclusive: Patrick and Paul Aiello on ..."
"I know this is from 5 years ago, but I just got around to seeing ..."
digital bookworm Exclusive: Watch the trailer for Becoming ..."
"Thanks so much for making this list. I was thinking of doing something similar, but ..."
Bill Kudrle The Chosen — season one scripture ..."
Browse Our Archives
Related posts from FilmChat