Ben-Hur remake gets a rewrite, starts shooting in spring 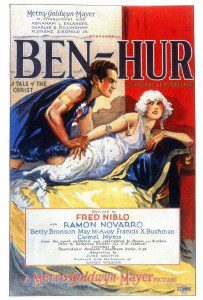 Deadline reports that John Ridley, the screenwriter behind the much-buzzed Oscars contender 12 Years a Slave, has been hired to do a rewrite on MGM’s latest version of Ben-Hur, the 1880 Lew Wallace novel that the studio previously adapted in 1925 and 1959.

With Kazakh action specialist Timur Bekmambetov lined up to direct, Deadline says the studio plans to start casting “soon” and to start production “in the spring.”

Deadline also says the existing script is different from the 1959 film “in that it will tell the parallel tale of Jesus Christ, with whom Ben-Hur has several encounters which moves him to become a believer in the Messiah, and which culminates in Christ being sentenced to death by Pontius Pilate.” Those things weren’t entirely absent from the 1959 film, but it certainly downplayed them compared to the novel and the 1925 film.

So it will be interesting to see just what, exactly, the new film does with the more explicitly religious material, and whether that material truly fits into the overall drama or comes across like it was put there to pander to the “Passion dollars” audience.

It should also be noted that the projected start of production, in the spring, will probably be after Son of God and Noah have come out, and possibly after Exodus has finished principal photography — so it will be interesting to see if the perceived success or failure of those Bible-themed films has any effect on this one.

October 23, 2013
Of course Noah isn't "biblically accurate", nor should it be.
Next Post

October 25, 2013 Antonia Bird's Priest and my early days as a film critic
Recent Comments
2 Comments | Leave a Comment
Browse Our Archives
get the latest from
FilmChat
Sign up for our newsletter
POPULAR AT PATHEOS Entertainment
1