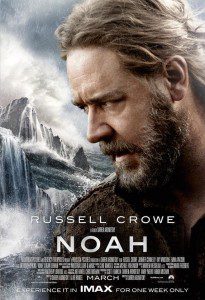 Several new articles about Darren Aronofsky’s Noah — including interviews with the filmmakers and op-ed pieces by people who have seen the film — have popped up since the last round-up. The film also has a new IMAX poster, which you can see to the right.

The biggest new interview is this one in the Los Angeles Times, apparently filed by John Horn from the film’s world premiere in Mexico City last Monday.

In it, Horn says the film is “one of the most overtly spiritual movies any big Hollywood studio has made in years,” adding that, “even if Crowe has the lead role, the real star of the movie is the concept of original sin.”

While Horn, it seems to me, sensationalizes a few things — while Jerry Johnson, the head of the National Religious Broadcasters, did persuade Paramount to add a disclaimer to some of the film’s marketing materials, I don’t recall hearing that he ever threatened to boycott the film, for example — he also gets some interesting quotes from Aronofsky himself. Here are some of the more interesting bits:

“When you really look at the story in the Bible, there’s very, very little information,” Aronofsky said. “It’s four chapters long. No one speaks until the end. And the Noah character doesn’t really have an arc — with a ‘c.’ But the more you read it, the more interesting clues there are. There are many, many hints at things.”

Working in what he calls “the tradition of Jewish Midrash” (stories based on the Bible by scholars), in which he and Handel work to fill gaps in the biblical narrative, Aronofsky created a story that tries to explicate Noah’s relationship with God and God’s relationship with the world as it has become. . . .

“To go all the way from the beauty of creation to the grieving of God’s heart in 10 generations made us think there is a lot of story there,” the director said. “The pain that the creator must have felt to be contemplating destroying His creation — we wanted to personify that. So we tried to connect that story to Noah’s story, and we made Noah a personified, humanized version of God’s journey. And God’s journey in the story is from a God who wants justice to a God who grants mercy.”

In other news, we have two new op-ed pieces by Christians who have seen the film.

Geoffrey Morin, chief communications officer at the American Bible Society, writes in USA Today that the film, and the debate surrounding it, should spur people to take a closer look at what the Genesis story actually says:

Whether you become a fervent fan or vocal detractor of the film Noah, my hope is that its very existence sparks your interest in not just watching it and talking about it, but in also digging into God’s word for yourself and reading the original story of a man who dared to say yes to God — in an ark-sized way.

Raymond L. Flynn, a former American ambassador to the Vatican writing for the Catholic News Agency, begins his look at the film’s theme of mercy on a similar note:

The movie adaption of Noah had my wife Kathy saying while leaving the theater, “I am going home to read the Bible.” A pretty inspiring reaction to a movie, I thought. Wouldn’t it be nice if Hollywood made more movies like “Noah,” which will have people leaving theaters saying things like that?

In a similar vein, Michael Rowland of The Jewish Voice, who does not appear to have seen the film yet, writes:

It’s been some time since we’ve had an Old Testament drama on the big screen, at least one that’s actually conceived and produced by a Jewish team. . . .

Between “Noah” and “Exodus,” 2014 may well turn out to be a blockbuster year for the Torah. Pop culture will be abuzz about these movies, so why not take this great opportunity to engage with our own JCC communities on the topicality of it all.

Rowland also states that the film has an R rating, but this seems erroneous, to me; while all but one of Aronofsky’s previous films have had R or NC-17 ratings (the one exception is The Fountain, which was PG-13), there is no rating for Noah at FilmRatings.com yet, and the filmmakers have said they were aiming for a PG-13.

In a somewhat different vein, Rahat Husain has a column in The Washington Times which looks at what Islam has to say about Noah, and how the Muslim version of the character seems to differ from Aronofsky’s version. Among other things, he notes that Noah did not merely stand by and watch as God wiped everybody out, as Russell Crowe has put it, but that Noah actually asked God to wipe everybody out:

The Quran, however, indicates that Prophet Nuh prayed “My Lord, do not leave upon the earth from among the disbelievers an inhabitant.” The account in Genesis states that God independently decided to do so. In Islam, it is taught that Prophet Nuh only made this prayer after coming to the firm belief that the world could not be saved, as they had decried their Prophet as insane or possessed. He attempted to preach for the entirety of his miraculously extended lifespan, spanning several centuries (a concept that also appears in Biblical accounts).

At the more trivial end of the spectrum, Elle magazine has some new photos and quotes from its latest cover girl Emma Watson, who plays Noah’s adopted daughter Ila in the film. Among those quotes, Watson offers this summary of the film:

“It’s Shakespearean, what happens to this family when they’re put in this confined space for 40 days and 40 nights. It’s the end of the world—how these different human beings are dealing with the impact of that. Are humans good? Are we bad? All of these themes are epic.”

In one of my previous posts, I noted that there were three Noah-themed books coming out March 18 — i.e. next Tuesday — including two novelizations and a graphic novel based on an early version of the script. Today I discovered that a fourth book is coming out the week after that (on March 25, the same day as the soundtrack album), and it will feature “art from the film and the director at work”.

Finally, the newest issue of the Canadian magazine Faith Today has an article on the year’s Bible movies written by my friend Jeff Dewsbury (he and I were associate editors at BC Christian News back in the day), and somewhere along the way he quotes yours truly. You might need to subscribe to the magazine in order to read the article online, but the link for it is here. Enjoy!

March 12, 2014
Between humanity and God: the violence of Noah
Next Post