Noah gets mixed to positive reactions in Mexico City 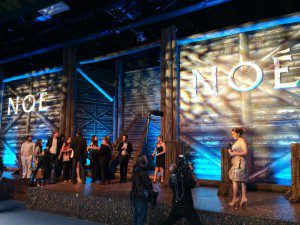 The long, long wait is over, for some.

Nearly two years after Paramount Pictures announced that it was going to make the film, Darren Aronofsky’s Noah had its world premiere in Mexico City last night, and both audience members and the handful of critic-bloggers who attended the screening (at least some of whom were flown down there at Paramount’s expense) have responded to the film.

A few new interviews with Aronofsky have also popped up online. You can check those out, along with the first Twitter comments (full reviews are apparently embargoed until closer to the film’s North American release date), after the jump.

Before we wade into the swamp of tweeted reactions from blogger-critics — and from Christians who saw the film late last week — I should first note the new interviews.

In one, Aronofsky tells The Times of Israel that the banning of his film in certain Muslim countries is “sad”, but adds: “In Islam they don’t really represent the Prophets in art. In Western culture we do all the time. So we knew it might be a problem when we first started this. But it’s sad, because I know people would get a lot out of the movie, but you have to respect what people think.”

The British-based Christian Today also has a brief interview with Aronofsky, who says: “In the same way that Middle Earth was created, we decided to create a world out of the clues from the Bible. We were able to build something that’s fantastical, but very truthful to the story. I really think this is the perfect film to bring believers and non-believers together, to develop a conversation between both sides.”

First, you can watch some brief red-carpet interviews here, as well as a two-minute interview with Aronofsky on Mexican TV here.

The Los Angeles Times notes that Aronofsky greeted the audience of 1,400 people by telling them that his film is “very, very different” from the Bible movies of the past, and “anything you’re expecting, you’re fucking wrong.”

(Is there a trend here? See my earlier blog posts on profanity used by Ridley Scott when discussing Exodus and by Mark Burnett when discussing The Bible, the mini-series that was re-edited to produce this year’s film Son of God.)

The Hollywood Reporter says the film got “a somewhat muted response from the crowd and mixed comments from both the audience and film critics.”

Mexican critic Mario P. Szekely told the paper that audiences “won’t connect emotionally with the main character because it betrays the essence of the biblical character, and the payoff just isn’t good enough.”

Some of the bloggers who attended the screening, however, were more positive — no doubt at least partly because they are fans of some of Aronofsky’s earlier films.

NOAH: imagine the serious philosophical and faith explorations of LAST TEMPTATION OF CHRIST with a LORD OF THE RINGS sheen.

THE FOUNTAIN really is the template for NOAH, at least when it comes to bombast mixed w/ deeper concerns. If you hated THE FOUNTAIN…

I think NOAH is going to be one I end up defending a bunch. It's odd and it's flawed but it's ambitious and thoughtful in ways I loved.

What I wonder is how audiences will take the way Noah himself gets dark. The film doesn't shy from the fact he leaves LOTS of people to die.

Final NOAH thoughts: Aronofsky shows the whole history of the universe. Anthony Hopkins incinerates an army with a flaming sword.

Peter Sciretta of SlashFilm had this to say:

.@DarrenAronofsky's Noah is a much different film than whats being advertised. Biblical epic meets fantasy, with a philosophical core.

Noah has a pro-science pro-faith tone, but for the most part, I don't know why religious viewers would have issues with the adaptation.

Noah is a divisive film (not from a religious perspective), akin to The Fountain, will have its fans & haters. Im in the former for both.

Nathan Lane, of Temple of Reviews and Film School Rejects, liked the film and noted that the studio doesn’t seem to know how to promote it:

#Noah is a complicated film, but strong overall. The studio seems lost, but they at least have a good product to figure out how to sell.

Really only the first half of #Noah has been advertised, minus some heavy fantasy elements. The second half is character-based thriller.

Opinions will differ, but nobody needs worry Aronofsky has stepped out of his wheelhouse to do studio fare. #Noah

Alex Billington of FirstShowing.net (who tweeted the image at the top of this post) was mixed on the film but loved Clint Mansell’s score:

Noah – Aronofsky's take on biblical story is solid, with some amazing scenes + a focus on character above all. Loved most but not all of it.

.@iamclintmansell's score for Noah may be my favorite Mansell score (will need album to confirm). It's next iteration of The Fountain score.

My favorite part of #Noah is The Watchers, these badass rock monsters – which they've barely shown at all even though they're a huge part.

We Got This Covered found the film uneven but loved the music and cinematography:

Despite being a bit uneven and too long, Darren Aronofsky's Noah is still a powerful experience with some stunning scenes #Noah #NoahMovie

Also, get ready for another epic Clint Mansell score and some gorgeous cinematography from Matthew Libatique #Noah #NoahMovie

It turns out the film was also screened last week for some Christian academics, artists and pastors. A sampling of their tweets follows:

Just pre-screened "Noah" movie. This film is worthy of our attention for our deeper questions of faith; a powerful, edifying film.

Update: Emma Watson also recently tweeted this interview she did for Wonderland magazine with Patti Smith, who wrote two songs for the movie:

From @wonderlandmag's #Noah section; my interview with Patti Smith pic.twitter.com/BvVErKI77H

March 12 update: You can see “red carpet” photos from the premiere at New Zealand’s 3 News and Great Britain’s Daily Mail, though it’s more like a blue carpet, really — presumably in imitation of the flood waters surrounding the Ark.

March 12, 2014 Between humanity and God: the violence of Noah
Recent Comments
0 | Leave a Comment
Browse Our Archives
Follow Us!