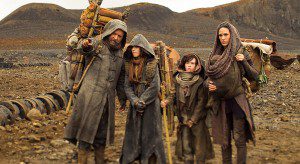 For a film with no Latin American stars, Darren Aronofsky’s Noah sure seems to be getting a fairly major push in the Latin American market. In an earlier post, I looked at a Brazilian trailer that seemed to be different from all the other trailers that had been released up to that point; and now, the Brazilian website Cinemarcado has a bunch of new images from the film. In addition, Aronofsky himself has tweeted that the film will have its world premiere in Mexico City this coming Monday.

One region where the film might not get so much love is the Middle East. The biblical Noah is regarded as a prophet by Muslims, and not just any prophet but as one of the top five, along with Abraham, Moses, Jesus and Mohammed — and today it was reported that Al-Azhar in Egypt is urging Muslim authorities to ban the film:

“Al-Azhar prohibits the screening of a film that characterizes Noah,” reads the title of a statement ‘issued on Thursday by the top Muslim institution.

“Al-Azhar renews its rejection to the screening of any production that characterizes Allah’s prophets and messengers and the companions of the Prophet [Mohammad],” the Azhar statement said.

It explained that such productions are “contrary to faith and to the fundamentals of the Islamic Sharia and provokes people’s feelings.”

“Therefore, al-Azhar announces the prohibition of the upcoming film about the Allah’s messenger Noah – peace be upon him.”

It argues that the film contains “personal characterization” of Noah, which is “prohibited in Islamic Shariah… and constitutes a clear violation of the principles of Islamic law stipulated by the Constitution.” . . .

Sheikh Sameh Abdel Hameed, a member of the Salafi Call, was quoted by Youm7 on Wednesday as saying: “Depicting prophets in art is a crime; not art, that is harmful to the image of prophets.”

The Hollywood Reporter says the film has already been banned by censorship boards in Qatar, Bahrain and the United Arab Emirates, and insiders at Paramount expect there to be similar rulings in Jordan, Kuwait and, yes, Egypt itself.

While Shi’ite Muslims have made a number of Bible movies in recent years, especially in Iran, Sunni Muslims in Egypt and elsewhere have long objected to portrayals of “the prophets” in film, going back at least as far as the protests against Youssef Chahine’s The Emigrant (1994), which was loosely based on the story of Joseph and the coat of many colours. More recently, Al-Azhar objected to a movie about Jesus that was written by a Coptic Orthodox Christian and was going to be directed by a Muslim, though I don’t know if that film ever got made in the end.

Curiously, Mel Gibson’s The Passion of the Christ (2004) seems to have been popular in Egypt and other Arabic countries ten years ago, though it was reported at the time that the allegedly anti-Semitic elements in the film appealed to local audiences, including some Christians, alas. That might have helped it squeak past the censors.

Of course, Noah has faced some controversy closer to home, which resulted in the studio declaring last week that it would add a disclaimer (which was basically copied-and-pasted from The Prince of Egypt) to the film’s marketing materials, to warn Christians and other prospective moviegoers that the film takes “artistic license” with the biblical source material. Now The Wrap reports that Aronofsky was unaware of the studio’s plans and was “not happy” that he heard about it through the press.

Meanwhile, the film’s promotional efforts carry on as before. A new featurette was released today — more on that in my next post — and Votivo is releasing a special Noah-themed edition of their aromatic candle ‘Rain’. (The tagline: “See the movie. Experience the fragrance.”) The company describes ‘Rain’ as “an exhilarating fragrance combining dew-covered oak moss and cedar with breezy notes of citrus and peppery jasmine,” and advises us that the candles will be “only available for a limited time, so be sure not to miss the boat!” Uh-huh.

Elsewhere, Emma Watson has posted an interview that she did with her Noah co-star Logan Lerman for Wonderland magazine — and it’s interesting to see how, while the film’s environmental themes are being downplayed by some in the Christian media, Lerman himself, when asked “Why do you think Noah is an important story?”, replies: “Noah is an important story because it reminds us that we have to respect the environment and the animals we share this planet with… or else!!”

The film will also be screened in Iceland on March 18 as part of an arts festival with Bjork and Patti Smith, the latter of whom (co-)wrote two songs for the film:

Finally, Aronofsky has tweeted a few more pictures from the art show which opens in New York tomorrow; I have added those images to the collection at this post.

March 5, 2014
Ridley Scott on the "very modern" monotheism of Moses
Next Post

March 6, 2014 Take a look at how the Noah team built the Ark
Recent Comments
0 | Leave a Comment
"This was a refreshing read. I'm an average fan of Hellboy but I'm also a ..."
Andrew Mathews Doug Jones on Hellboy and Christianity.
"Great interview! One thing I've wondered since watching Season 1 is why they didn't include ..."
A.J. Cattapan Interview: The Chosen writer-director Dallas Jenkins ..."
"Earth actually does exist in the Dark City universe. Early in the film when John ..."
Edward Clint Dark City and the ambiguous ending.
"I don't always agree with your opinions, but your reviews are never less than interesting ..."
Laura-Lee Rahn The top-grossing Italian movie of 2019: ..."
Browse Our Archives
get the latest from
FilmChat
Sign up for our newsletter
POPULAR AT PATHEOS Entertainment
1