Noah: some new trailer images, and a new magazine article 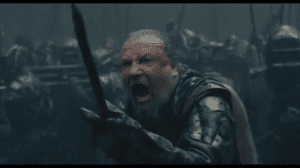 I don’t know how I never noticed this before, but today I discovered a Brazilian trailer for Noah that includes a few shots that have not appeared in any of the trailers or TV spots that I have covered so far — and the Brazilian trailer has been online for three months! As ever, you can check it out, along with some screen captures, below the jump. And then, after that, you can check out some quotes from the director and the actors that recently appeared in Total Film magazine. 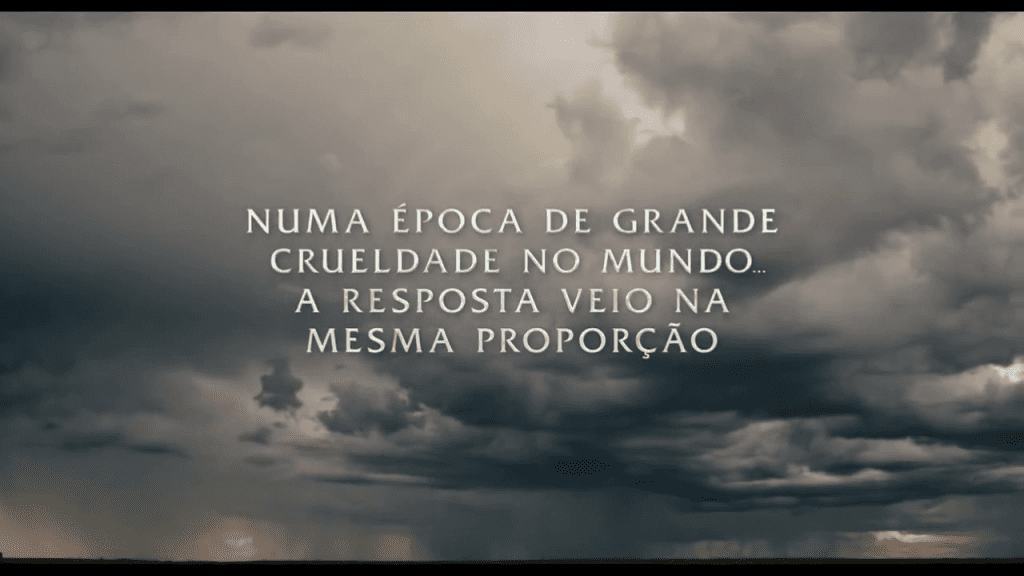 According to Google Translate, the title card here basically says:

Beyond this, there are four completely new shots in this trailer — new to me, at any rate — and three of them are related to Noah’s dream, which opens this trailer just as it opened the domestic trailer and the church-conference trailer. 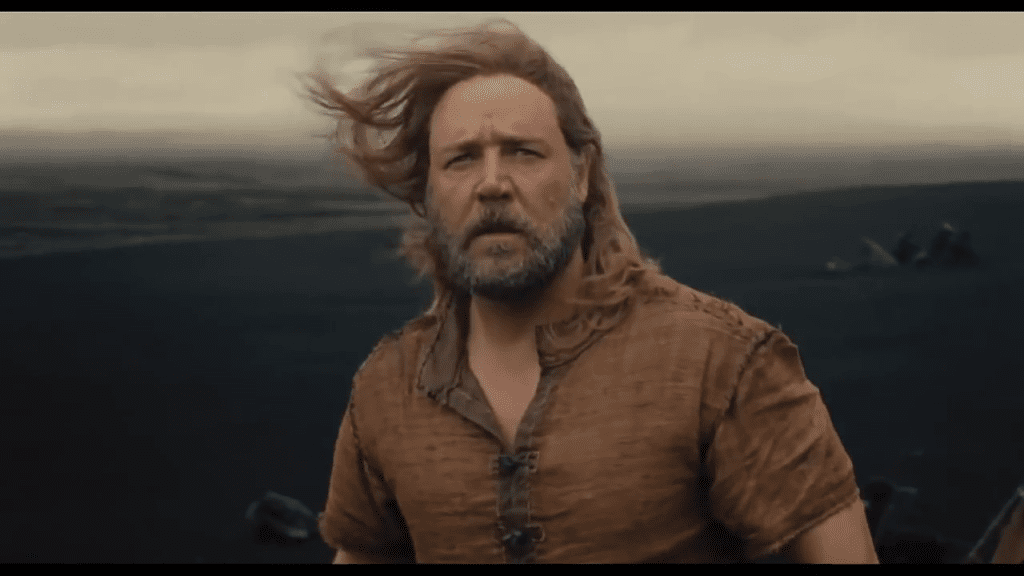 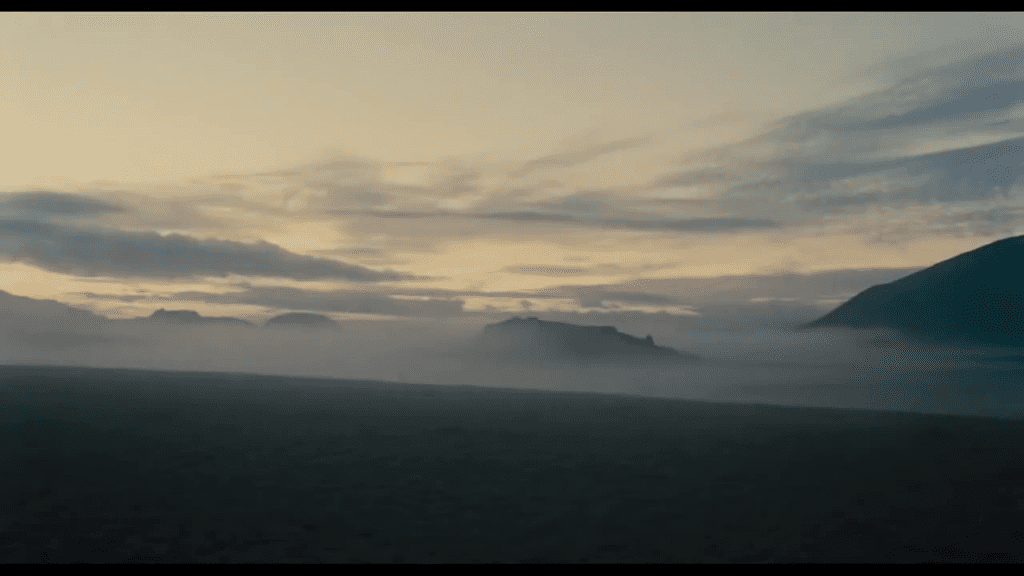 Then, there is the rapid-fire montage as Noah gets his premonitions of doom, and this time the images include a collapsing bit of scaffolding (which was also in at least one of the church-conference trailers) and, most interestingly, what looks like a bunch of animals swimming up to the glowing underside of the Ark: 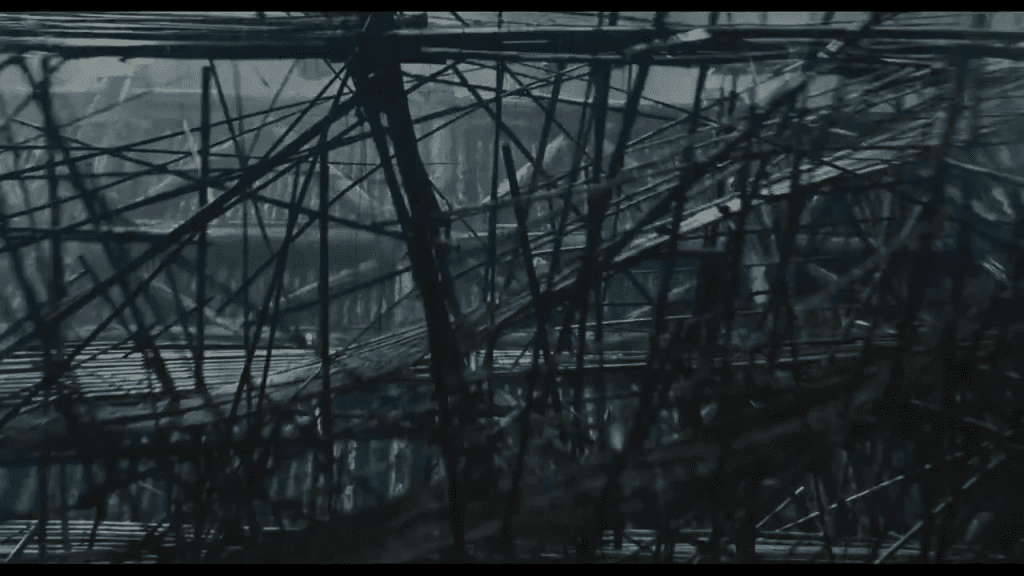 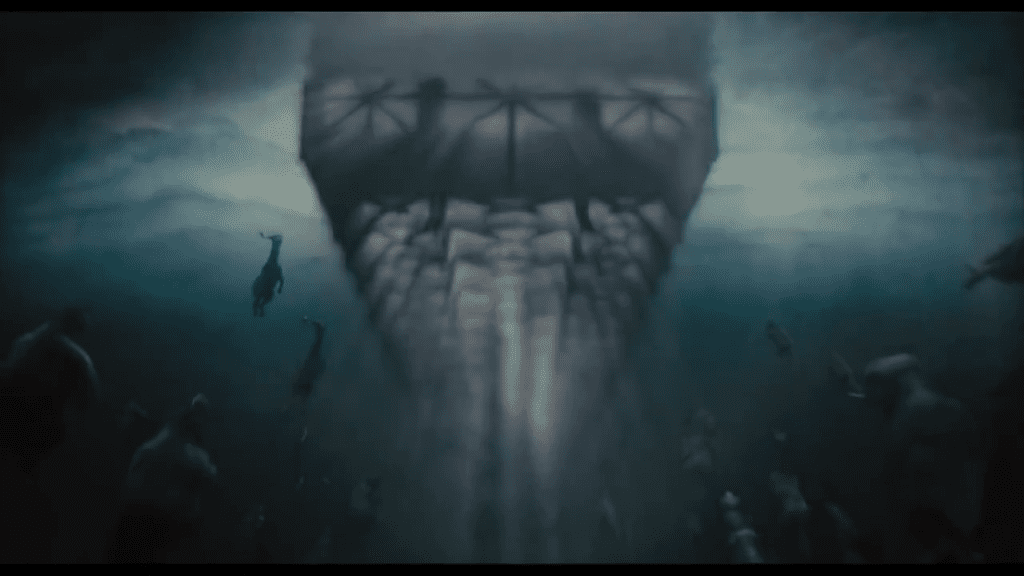 The only other shot from the trailer that seems new to me is this one of Tubal-Cain charging with a spear, as he and his men mount their assault on the Ark: 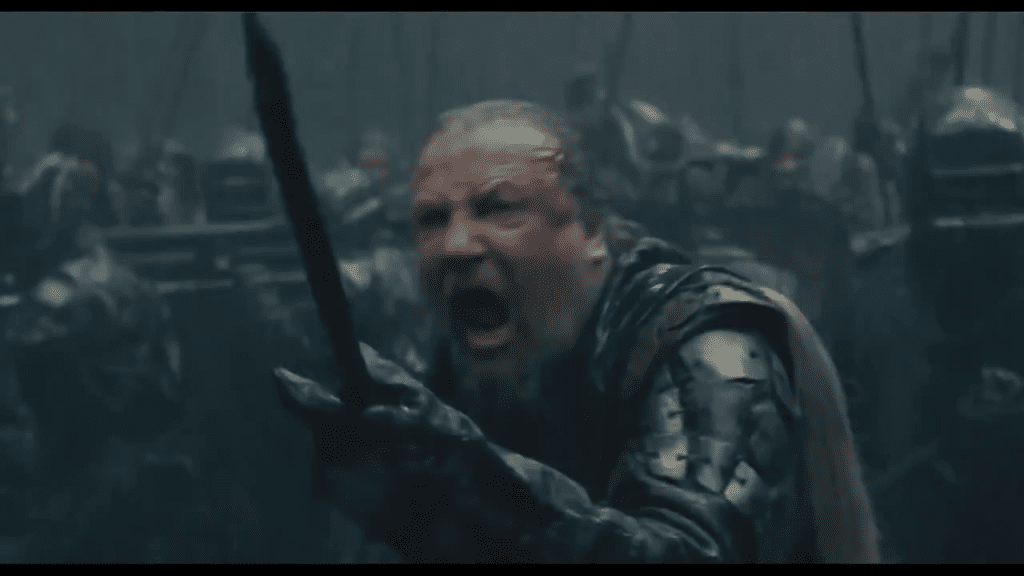 So. I once thought I would not have to watch all of the international trailers that were released on November 14, because I figured they’d all have the same visuals, just different subtitles, but now… hmm. What else have I missed…?

Meanwhile, in other Noah news, the same issue of Total Film that featured Ridley Scott’s Exodus the other day also had a four-page article on Noah. There’s not a whole lot new here, but some of the quotes are interesting, such as this one:

Aronofsky’s persuasive skills had been honed over six years of development. Having co-written a treatment with Ari Handel, he’d begun to shop the project around and consider the wider attractions of the story in an era of avengers, web-slingers and caped crusaders. “I had the idea that no one had done the Bible in 50 years, and in many ways they’re like the original superheroes,” recalls the director. “I wanted to translate it completely and to honour it in the same way that you can make a movie about the Norse gods, or you can make a movie about the Greek gods.”

“It is a great story, so I looked at that and started to build a mythology out of that, because if you think about the pre-diluvian world, what was that world like? So me and my team started to think about our own Middle-earth, but for the Bible. Once the flood’s over, the world gets very normal, but before that, we tried to create a world that all these miracles could live in, and create a new universe. But then when you actually look at the story it’s a much bigger story, a very, very tragic story. It’s the destruction of all of humankind as well as all the innocent animals that didn’t get on the boat — they all drowned, so it’s truly the first apocalypse story.”

Russell Crowe, for his part, offers this insight into his character:

“People ask you about the spiritual connection between Noah and God and it’s like, well, you can’t really be that certain he’s being talked to by God,” poses Crowe. “For a goodly portion of time he’s probably feeling like he is going crazy.”

Jennifer Connelly, who plays Noah’s wife, talks about how the film’s portrayal of a civilization at war and destroying itself could resonate for a modern audience, and she adds that “the movie that I was working on and the character that I was playing were both very much grounded in history. That’s what I was looking to.”

There are some other interesting tidbits in the article too, such as the fact that God is apparently never called “God” in this film but, rather, is referred to simply as “the Creator”. You can read it all by clicking on the images below: 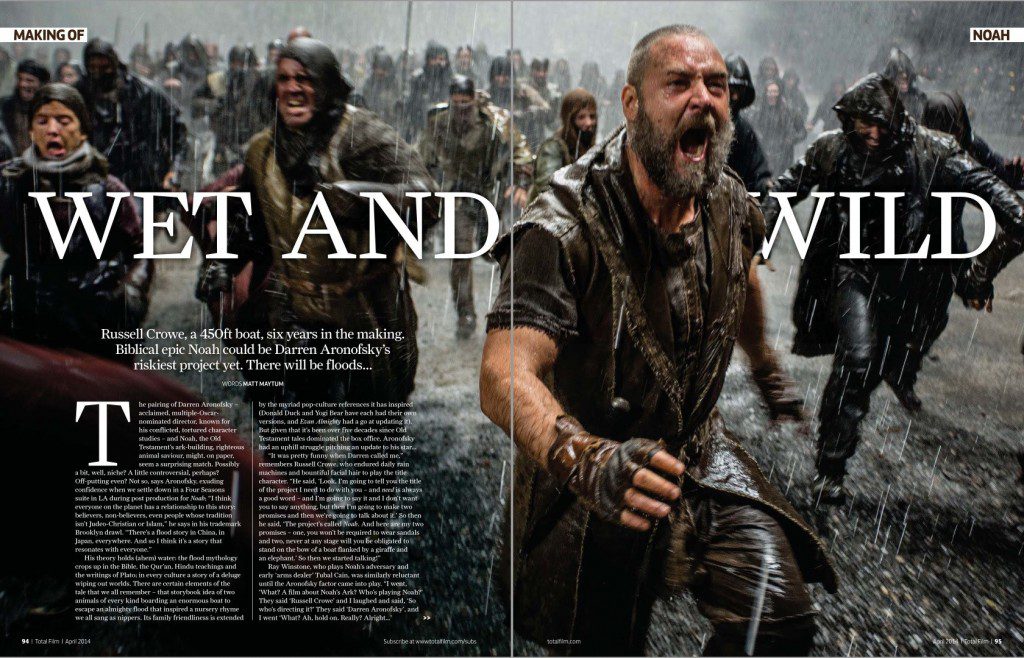 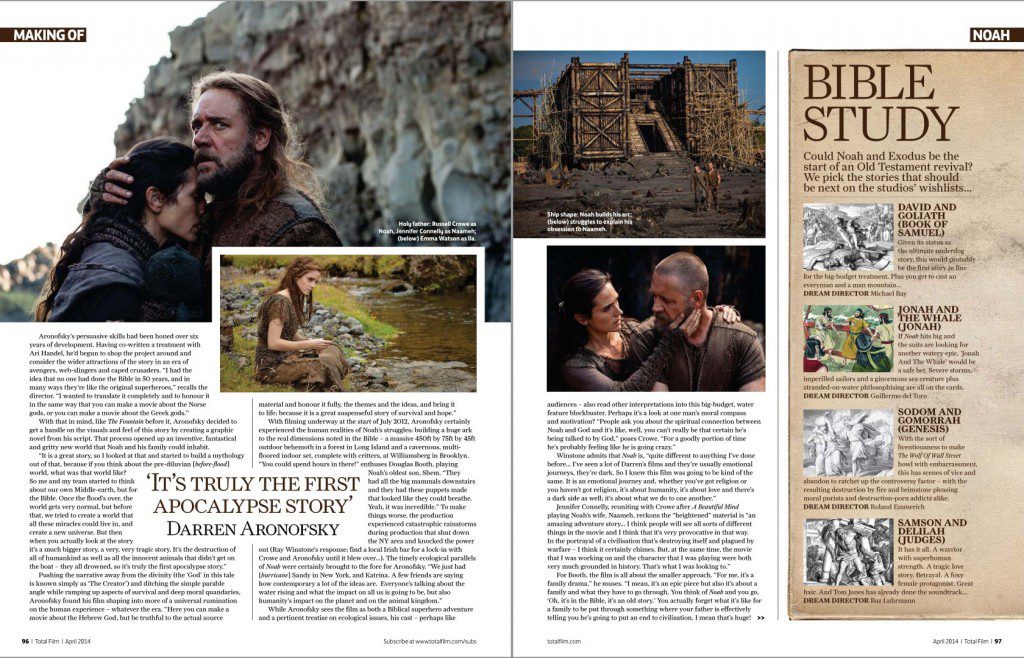 February 15, 2014
Bible films (and other ancient epics) and Oscar nominations
Next Post

February 16, 2014 The Prodigal Son: three filmed interpretations (and more)
Recent Comments
0 | Leave a Comment
"Animation would uniquely allow the creator to show the genitalia without getting into the waters ..."
Kellen The naked Christ in film: birth, ..."
"Gentlepersons:While I am a lifelong Christ-follower and served as Chaplain to a graduate program in ..."
Darrell A. Harris Exclusive: Patrick and Paul Aiello on ..."
"I know this is from 5 years ago, but I just got around to seeing ..."
digital bookworm Exclusive: Watch the trailer for Becoming ..."
"Thanks so much for making this list. I was thinking of doing something similar, but ..."
Bill Kudrle The Chosen — season one scripture ..."
Browse Our Archives
Related posts from FilmChat