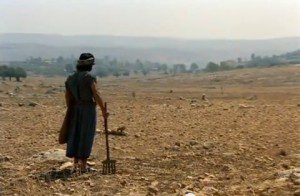 Today was the Sunday of the Prodigal Son in Eastern Orthodox churches, and once again, I found myself thinking about how our gospel reading for the day had been handled in different films.

The parable of the prodigal son appears just once in the Bible, in Luke 15, so of course it is featured in the word-for-word adaptation of that gospel produced by the Genesis Project in the 1970s. And just as the Genesis Project dramatizes some of the other parables while Jesus recites them, so too it dramatizes this one. You can watch the relevant sequence by clicking here.

Curiously, despite the popularity of this parable, it seems to be missing from Jesus (1979), the two-hour movie that was condensed from the Genesis Project’s adaptation of Luke; at any rate, I can find no reference to this parable in the rather detailed chapter on Jesus in W. Barnes Tatum’s Jesus at the Movies, and it is missing from my friend Matt Page’s scene guide for that film. It’s a rather striking omission.

But lest there be any doubt about this parable’s popularity, it was also included in the musical Godspell (1973), despite the fact that that film is supposed to be based on the gospel of Matthew. The people who wrote this musical evidently felt they couldn’t leave this story out even though it comes from the “wrong” gospel: 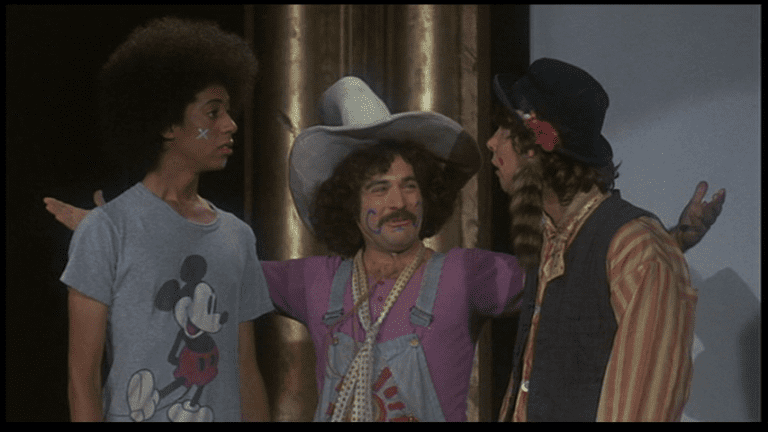 Beyond that, the only other significant adaptation of this parable I can think of — in a life-of-Jesus movie, that is — comes from Franco Zeffirelli’s Jesus of Nazareth (1977). And the film does something brilliant with this parable, indeed. You can watch Jesus tell it in the clip below, starting at about the 5-minute mark, but you might want to watch the entire clip just to see how Zeffirelli contextualizes this parable:

I have written about this scene before, on at least two occasions. Here is how I described it in my essay ‘Come and See: How Movies Encourage Us to Look at (and with) Jesus’, which concerns the use of point-of-view shots in Jesus movies:

Zeffirelli’s Jesus is very much a mystical Jesus. The interactions between most of the characters are frantic, busy, antagonistic, even humorous — but at the heart of it all, Jesus himself remains serene. Rare hints of subjectivity are overwhelmed by their more mystical significance. For example, Jesus tells the parable of the prodigal son after observing, in a point-of-view shot, that a sullen Peter has shown up reluctantly at a party thrown by the despised tax collector, Matthew. Whatever insight this point-of-view shot might give us into Jesus’s motives for telling that story at that time is overshadowed by the close-ups on Jesus’s face as he reaches the climax of his story and implicitly bids Peter to be reconciled to Matthew. Jesus, looking at the camera, approaches it, and we realize that we are now seeing him from Peter’s point of view; the mystical gaze of Jesus has fixed on him, and on us, with the aim of changing his heart and ours.

And here is what I had to say about it last year, immediately after praising a scene in The Bible (2013) where Jesus used a rather different parable, i.e. the parable of the Publican and the Pharisee, to invite Matthew to join his disciples:

That being said, I cannot help but also contrast the Matthew-and-parable scene here with a very different Matthew-and-parable scene in another movie. In Franco Zeffirelli’s Jesus of Nazareth (1977), Matthew is Peter’s neighbourhood tax collector, and Peter hates him for obvious reasons — so when Jesus goes to Matthew’s house, he bridges the gap between these two men by telling the parable of the prodigal son. When Peter hears the words of the father to the jealous elder brother, Peter realizes that he is committing the same sin as the elder brother, and this realization leads to a reconciliation with Matthew which is quite powerful in its own way.

In The Bible, on the other hand, Jesus tells the parable of the publican and the Pharisee in the presence of an actual Pharisee who is already very critical of Jesus’ movement. And as Matthew goes on to join Jesus’ movement, the Pharisee proclaims that if Jesus is accepting sinners like Matthew, then who knows what other kinds of sinners there might be in Jesus’ entourage. So where, in Zeffirelli’s film, the parable served to bring together two former enemies, the current mini-series is, perhaps, more divisive, more conducive to us-vs.-them ways of thinking.

There may be other films that show Jesus telling the parable, but none are coming to mind right now. However, there have also been a number of films that are based directly on the parable itself, many of which were made during the silent era, when films were not necessarily expected to pad their stories out to feature length.

The one direct adaptation that I have seen is The Prodigal (1955), a Lana Turner vehicle the reputation of which can probably be gauged by the fact that it was released to DVD a few years ago in a boxed set of ‘Cult Camp Classics’. I watched the film back then but can barely remember it now. You can see a trailer for it here:

There was also a Billy Graham film called The Prodigal (1983), which was set in the present day, but it had nothing to do with the biblical story as I recall, apart from being about a guy who leaves his family and is ultimately reconciled to them.

As always, if I have forgotten anything, please let me know. Thanks!

February 16, 2014
Noah: some new trailer images, and a new magazine article
Next Post