The Publican and the Pharisee: four filmed interpretations 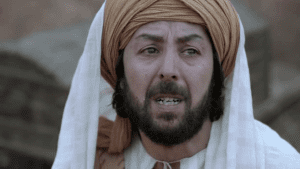 Today, in Orthodox churches, was the Sunday of the Publican and the Pharisee. It’s the day when we read the parable that Jesus told about a Pharisee and a tax collector who went to the Temple to pray; while the Pharisee spent his prayer bragging that he was a great and righteous man, the tax collector begged for God’s forgiveness — and it was the tax collector, rather than the Pharisee, who “went home justified before God.” And so the parable reminds us that we need to pray in humility, and that it is not our place to judge our fellow human beings.

We read this parable on this day to remind ourselves that Lent is only a few weeks away, and that we should approach the season of fasting and prayer humbly, without judging our fellow churchgoers (or, indeed, anyone else). And, naturally, as I pondered this parable, I began to think about how it has been handled in film.

There are two basic ways that a film can incorporate this parable: it can show Jesus telling the parable, with dialogue, or it can dramatize the parable, with actors playing the two main characters. Interestingly, the few films I can think of that have referenced this story have tended to offer a mix of these two basic approaches.

The simplest adaptation is in the Campus Crusade film Jesus (1979), where Jesus simply tells the parable to a crowd of people while sitting in Peter’s boat: 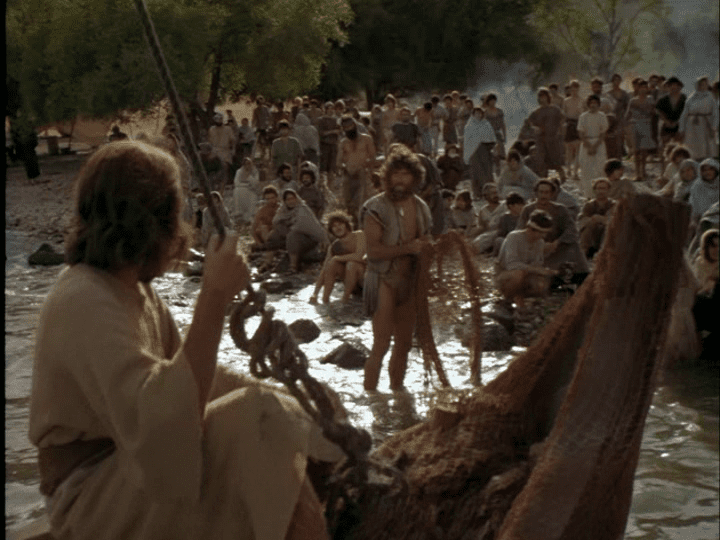 Interestingly, although the parable comes from Luke 18, the film — which is based on Luke’s gospel and was widely promoted at the time as the most accurate Bible movie ever — moves the parable to an earlier part of Jesus’ ministry taken from Luke 5.

What makes this recontextualization even more interesting is that there was an even longer version of this film that included the entire gospel, word-for-word — and in that version, Jesus tells the parable to some random people in the street, and the film actually dramatizes the parable as Jesus tells it (you can watch that clip here): 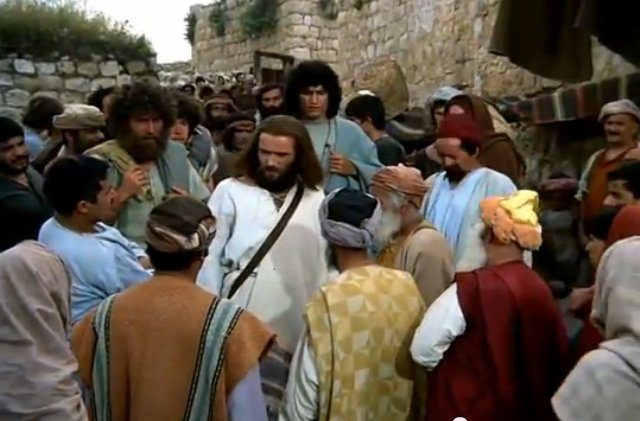 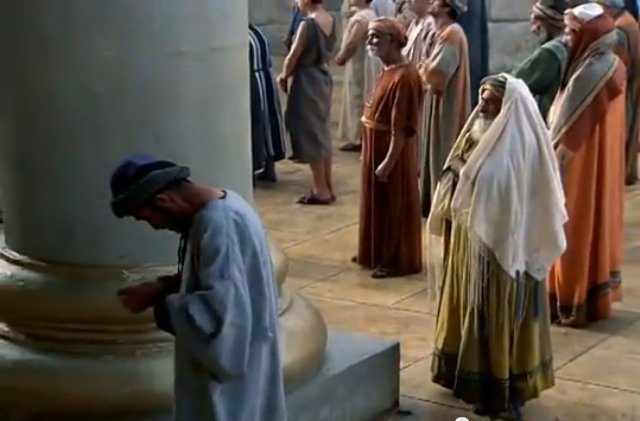 Beyond that, the only other film I can think of that offers a simple telling of the parable, rather than a strict dramatization, is Godspell (1973) — but even there, the parable is presented almost as a sort of comedy sketch that the disciples perform for each other, so the sequence still has some elements of dramatization: 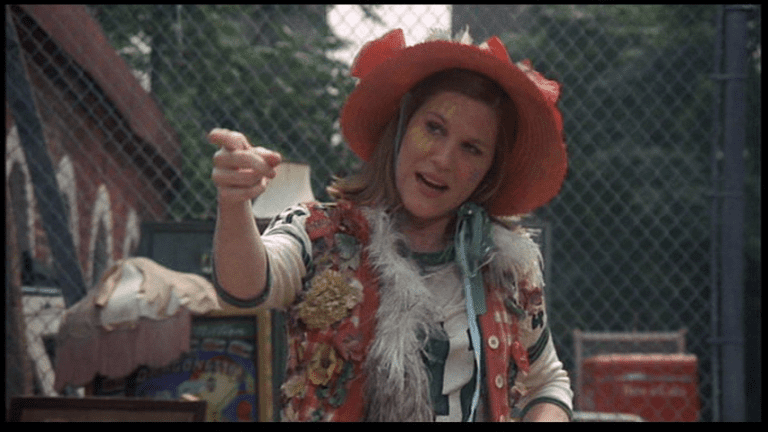 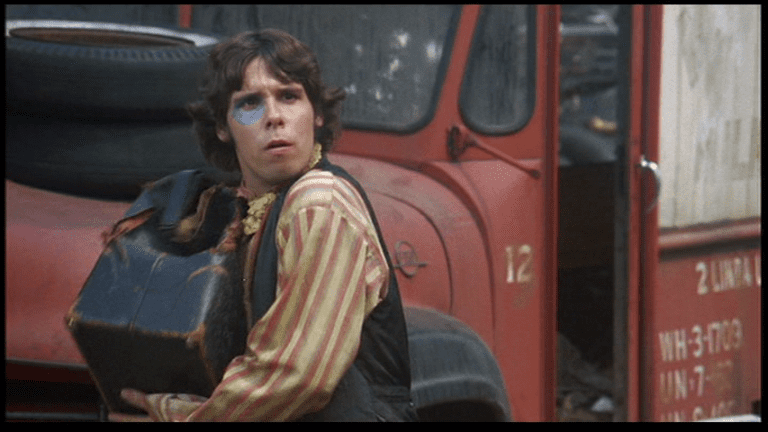 Interestingly, Godspell bills itself as an adaptation of Matthew, but this parable is one of several elements from the other gospels that are incorporated into that film.

Then there are the films which transform the parable from a simple story told by Jesus into an actual part of the drama surrounding Jesus’ ministry.

One of the earliest such films is D.W. Griffith’s Intolerance (1916), which doesn’t exactly tell the story of the parable, per se, but it does introduce Jesus as “the greatest enemy of intolerance” — and it quickly establishes “certain hyprocites among the Pharisees” as his nemeses, as the sort of killjoys who openly thank God that they are “better than other men” (a paraphrase of what the Pharisee says in the parable): 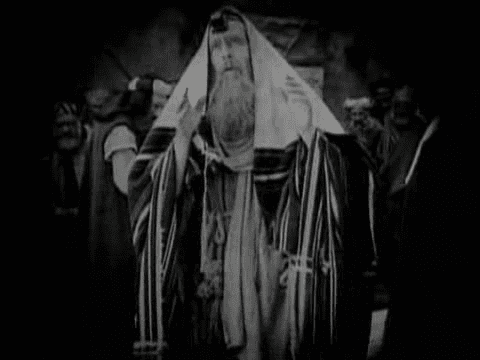 The boldest dramatization of all, however, comes from last year’s mini-series The Bible, from which the image at the top of this post comes. Here is part of what I said about the sequence in question when I blogged the mini-series last year:

Then there is the scene where Jesus calls on Matthew, the tax collector, to join him and his disciples. When the scene begins, Jesus is surrounded by disciples who follow him and at least one Pharisee who criticizes him — but the one thing disciples and Pharisee can agree on is that tax collectors are “vermin”. Jesus responds by telling the parable of the publican and the Pharisee — and as he reaches the words that the publican spoke in humble prayer, Matthew recites them in sync with Jesus and starts to cry.

It’s an especially powerful moment, and it may catch the viewer by surprise, inasmuch as it suggests that Jesus is not only telling a story here but exercising his divine or prophetic knowledge of something that Matthew had done more-or-less in private. And of course, by exercising his knowledge like this, Jesus lets Matthew know that his prayers have been heard, which gives Matthew an emotionally compelling reason to drop his work and join the Jesus movement right then and there. (Honestly, I get a little verklempt just thinking about that scene as I write these words, three days after seeing it.)

I had more to say about that scene at the time; you can read it all here. But note how The Bible shows Jesus telling the story and dramatizes the story, inasmuch as Matthew recites the words of the tax collector and we are led to believe that this parable is describing something that Matthew himself has actually done.

Incidentally, I believe this scene will be included in Son of God, the big-screen re-edit of The Bible that comes out three weeks from now. You can also watch it here:

February 7, 2014
Noah soundtrack album to be released by Nonesuch
Next Post

February 10, 2014 Patti Smith wrote a lullaby for Noah, and other tidbits from the Rolling Stone interview with Darren Aronofsky
Recent Comments
0 | Leave a Comment
Browse Our Archives
get the latest updates from
FilmChat
and the Patheos
Entertainment
Channel
POPULAR AT PATHEOS Entertainment
1