Noah soundtrack album to be released by Nonesuch 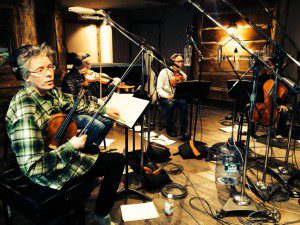 The latest bit of Noah news isn’t exactly surprising, but it’s nice to have it confirmed just the same: a soundtrack album featuring the music composed by Clint Mansell and played, in part, by the Kronos Quartet will be released by Nonesuch Records, the label that has handled nearly all of the Kronos Quartet’s albums since 1986. This soundtrack marks the third big-screen collaboration between Mansell and the Quartet; they previously worked together on the scores for Requiem for a Dream (2000) and The Fountain (2006), both of which, like Noah, were directed by Darren Aronofsky. Album details and a release date are expected in the next few weeks. The film itself comes out seven weeks from today.

The music for this film could be very different from previous Mansell/Kronos collaborations, but if you want to get a taste of the fruit of their earlier labours, here are the opening tracks from the soundtracks to the other two films.

First, the ‘Summer Overture’ from Requiem for a Dream:

And then, ‘The Last Man’ from The Fountain:

February 7, 2014
LaHaye hated the first Left Behind film, but loves the reboot
Next Post

February 9, 2014 The Publican and the Pharisee: four filmed interpretations
Recent Comments
0 | Leave a Comment
"In 1972, yes. The movie was made in 1956 but the ratings system didn't exist ..."
Peter T Chattaway One of the reasons I do ..."
"And to think... this movie was rated G? It was."
Bishop One of the reasons I do ..."
"John 7:5 states explicitly that the brothers of Jesus did not believe in him, at ..."
Peter T Chattaway The Chosen starts shooting its second ..."
"Thanks. There is a whole other anecdote in between those two verses. Other relatives, sure, ..."
tmirus The Chosen starts shooting its second ..."
Browse Our Archives
get the latest from
FilmChat
Sign up for our newsletter
POPULAR AT PATHEOS Entertainment
1