LaHaye hated the first Left Behind film, but loves the reboot 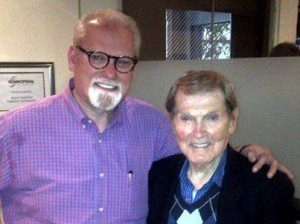 The Facebook page for the upcoming Left Behind reboot announced the other day that Tim LaHaye and Jerry Jenkins, who co-wrote the original series of novels, recently saw a rough cut of the film and gave it “two enthusiastic thumbs up”.

A bit of background: LaHaye actually sued the makers of the original trilogy (which went straight-to-video between 2000 and 2005, though the first film also received a theatrical release in 2001), claiming that he had sold the film rights on the condition that the film be produced a major studio, with top-of-the-line stars, and released to theatres in late 1999 so as to capitalize on the Y2K craze.

In 2003, the lawsuit was thrown out of court, but by that point one of the production studios, Cloud Ten, had filed a countersuit against LaHaye for breach of contract, among other things. Ultimately, in 2008, the two sides settled their legal differences, thereby paving the way for more Left Behind films.

And so, now, LaHaye is waxing enthusiastic about a brand-new Left Behind film that is… produced by the same people as the original trilogy and stars Nicolas Cage, an actor who might have had major-star status a decade ago but has since been involved with far more flops and box-office disappointments than hits.

Oh well, as long as everyone’s happy and getting along, now, I guess.

Incidentally, a clip from the new film was released a couple weeks ago. If you missed my very brief reference to it in an earlier post, you can watch it below:

February 7, 2014
Son of God: why is Jesus holding that stone in his hand?
Next Post

February 7, 2014Noah soundtrack album to be released by Nonesuch
Recent Comments
0 | Leave a Comment
Browse Our Archives
get the latest from
FilmChat
Sign up for our newsletter
POPULAR AT PATHEOS Entertainment
1