Son of God: why is Jesus holding that stone in his hand?

Son of God: why is Jesus holding that stone in his hand? February 7, 2014 Peter T. Chattaway 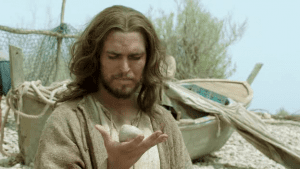 The YouTube channel for Son of God has been releasing new videos almost daily, all of them consisting of various Christian leaders who have lined up to promote the film by commenting on a clip from the film.

Despite the fact that there are a dozen different “exclusive interviews” on the YouTube channel now, they all revolve around just three basic clips: ‘Peter Goes Fishing’, ‘Walking on the Water’ and ‘The Last Supper’. And today’s clip, featuring Cardinal Donald Wuerl, offers an interpretation of the ‘Peter Goes Fishing’ scene that hadn’t occurred to me before.

Specifically, Wuerl notes how the scene begins with Jesus holding a rock and pondering it, and he says, “It’s a reminder to all of us, visually, that Peter is going to be the rock on which Jesus will build his church.” You can watch the clip here:

I must admit, this interpretation didn’t occur to me when I first wrote about The Bible — the mini-series from which this movie comes — almost a year ago. Back then, I interpreted the scene in light of the fact that, just four minutes earlier (in movie time), Jesus had turned down Satan’s suggestion that he turn some stones to bread:

Finally, there is one “private” detail that I find kind of intriguing. The temptation sequence begins with Satan throwing a rock to Jesus, which he catches. Later, when Jesus approaches Peter’s boat, he picks up a rock and looks at it before putting it back down. What is he thinking? Is he pondering the choice he has made? Having refused to perform the miracle that Satan asked him to perform, is he looking ahead to his own first miracle? (The first miracle he performs in this mini-series, that is; according to John’s gospel, the first miracle he performed was changing water to wine.)

Somehow, though, the possibility that the stone might be a nod to Peter, whose name means “the rock”, completely slipped by me — even though that’s my name, and St Peter is my patron saint! (Incidentally, I don’t think I ever noticed before that Peter is Peter’s name from the very beginning in this mini-series. In the Bible, his birth name was Simon, and Peter was a sort of nickname that Jesus gave him.)

So, thanks to Cardinal Wuerl for that alternate interpretation. And it’s precisely because such enigmatic moments are open to a variety of interpretations that I wish films in general — and Bible films in particular — had more of them.

February 7, 2014 LaHaye hated the first Left Behind film, but loves the reboot
Recent Comments
0 | Leave a Comment
Browse Our Archives
get the latest from
FilmChat
Sign up for our newsletter
POPULAR AT PATHEOS Entertainment
1