How do you promote a Bible epic when you’re not religious?

How do you promote a Bible epic when you’re not religious? October 29, 2013 Peter T. Chattaway 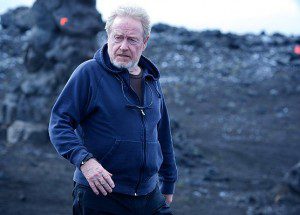 Ridley Scott first revealed that he was making a life-of-Moses movie while promoting Prometheus last year. I’d been hoping that he would spill even more details about the film, now called Exodus, while promoting his latest film, The Counselor, but alas, that film didn’t get much of a promotional push (and it ended up having one of the worst opening weekends of Scott’s career).

A few tidbits about Exodus have trickled out, however. First, Scott told The New York Times: “I’m an atheist, which is actually good, because I’ve got to convince myself the story works.” And then, he told Empire magazine the film will be “fucking huge.”

Suffice it to say, this is not how Bible epics have generally been promoted in the past.

To be sure, many Bible movies have emphasized spectacle above all, and have sometimes seemed quite crass while doing so. But the makers of those films have generally insisted that they were aspiring to something nobler or more virtuous, too.

The chief Bible-epic maker in this regard, as in many other regards, is Cecil B. DeMille, who filled movies like The King of Kings (1927) and The Ten Commandments (1923, 1956) with sexy costumes, spectacular visual effects and gratuitous love triangles, but who also insisted that his films were promoting religious tolerance and universal values that everyone needed to live by.

Back in those days, Bible movies were quite common, so it’s doubtful that every such film straddled the line so carefully. (And with sensationalistic titles like Sins of Jezebel, it’s pretty clear that filmmakers in the 1950s weren’t necessarily aiming their films at the most pious audience members to begin with anyway.)

But over the past quarter-century, only a few Bible movies have been made for the big screen, and the producers or directors in every single case have made a point of emphasizing the films’ sensitivity to the religious communities that own these stories or, alternatively, of pointing to their own personal spiritual journeys as justification for making the films.

The trend arguably started with The Last Temptation of Christ (1988), which for all the controversy it inspired was nevertheless promoted by director Martin Scorsese as an expression of his own lifelong interest in spiritual things, going back to when he was a Catholic boy interested, however briefly, in becoming a priest.

A decade later, when DreamWorks produced The Prince of Egypt, studio co-founder Jeffrey Katzenberg was careful to solicit feedback from Jewish, Christian and Muslim leaders. The film even ends with a title card that quotes the scriptures of all three religions to demonstrate that Moses is regarded by all three as a prophet.

A few years after that, Mel Gibson connected with Christian audiences and scored a hit with The Passion of the Christ (2004) by emphasizing that the film was an expression of his own Catholic faith.

The Passion was soon followed by The Nativity Story (2006) — and while the director of that film did not make too much of her own spiritual beliefs at the time, the producers and the screenwriter certainly discussed their own faith.

And finally, most recently, there was the miniseries The Bible, which will be spun off into the feature film Son of God. Here, again, producers Mark Burnett and Roma Downey made a point of emphasizing their Christian faith from day one.

The thing that unites nearly all of these films is that they were passion projects of one sort or another. Even The Prince of Egypt, for all its focus-group-tested ecumenism, has a strongly Jewish identity that comes through in the Hebrew lyrics sung by Moses’ mother and by the celebrating children at the end of the film.

But the fact that the openly agnostic Ridley Scott is making a Bible movie now, and talking it up the way he is, may signal that the current Bible-movie revival has entered a new phase, where directors with a pronounced cinematic style but no particular affinity for religion — see also Timur Bekmambetov, whose follow-up to Abraham Lincoln: Vampire Hunter will be a remake of Ben-Hur — are openly tackling religious-themed projects simply because it seems like a good gig.

Given that the studios that finance these movies are very keen to win the favour of the religious moviegoing audience, there is room for lots of tension here.

Some might point to the recent controversy over Darren Aronofsky’s Noah as an example of what can happen when a filmmaker neglects to make its biblical heroes as heroic as certain audience members, and therefore the studio, might like.

But that film is actually a passion project for Aronofsky the same way many of the earlier films were for their own filmmakers; the issue with Noah seems to be that Aronofsky is a, shall we say, somewhat idiosyncratic filmmaker whose approach to the story might be a hard sell for some audience members.

Aronofsky really does want to convey a message through all the spectacle, just as DeMille did; the question is whether it’s a message that will sell tickets.

Scott, for his part, hasn’t really dropped any hints yet as to what he plans to do with his Moses movie. He did tell Empire his film will include the parting of the Red Sea, so it seems he’s not going to eradicate the miraculous elements, at least not entirely.

But Scott is quite skeptical of religion — he called it “the biggest source of evil” and said he couldn’t “think of a good one” mere seconds before revealing that he was about to make Exodus — so it does raise questions about how he will approach this story.

Will the battle of wills between Moses and the Pharaoh be portrayed as a contest between rival deities, as it was in The Prince of Egypt? Or will Scott equivocate somewhat between the two religions? Will we see Moses receive the Law on Mount Sinai and punish the Hebrews for breaking it, as we did in The Ten Commandments? Or will Scott question the strictness of the laws and punishments imposed by Moses, the way that, say, Gianfranco De Bosio’s Moses the Lawgiver (1974) did?

And how will the studio actually go about promoting this film? Will it go out of its way to court the “Passion dollars” audience, even to the point of hiding some of the film’s more unusual content, the way that another studio has been doing with Noah? Or will it promote the film as a straight-up action-oriented spectacle, just like all the other recent movies that have played on ancient history and mythology?

At this point, it’s impossible to say, of course. But questions like these do make me keen to see what Scott will say when he makes his next promotional tour.

October 31, 2013 Review: About Time (dir. Richard Curtis, 2013)
Recent Comments
1 Comment | Leave a Comment
Browse Our Archives
get the latest from
FilmChat
Sign up for our newsletter
POPULAR AT PATHEOS Entertainment
1