Cyrus the Great — a Persian king ready for his close-up? 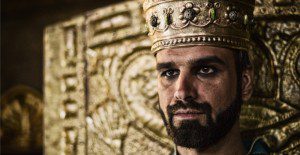 Last week, the LA Weekly posted an item about the Cyrus Cylinder, an ancient Persian artifact that is currently touring American museums.

The blog post notes that the Cylinder is widely regarded as the first known declaration of human rights, and it goes on to suggest that Americans of Iranian descent will be “eager for the opportunity to remember and embrace a noble part of their identity that’s not yet been desecrated by Hollywood (we’re looking at you, 300)”.

This got me thinking: how often has Cyrus been depicted in film? (300 took place about 50 years after his death, during the reign of Xerxes.) To what extent has his role in history — as one of the more enlightened conquerors of ancient times — been recognized on the big screen, or on the small screen for that matter?

One obvious and very recent example came up earlier this year in the mini-series The Bible, pictured above.

The famous story about Daniel in the lion’s den takes place during the reign of Cyrus, and although the Bible says the ruler who dealt with Daniel at the time was someone named Darius the Mede, the mini-series had Daniel deal with Cyrus directly. This allowed the mini-series to acknowledge how the Bible praises Cyrus — especially in the books of Ezra and Isaiah — for letting the Jews return to their homeland.

Apart from that, I can’t think of many other examples.

The IMDb lists only two dramatic films that have included him as a character: D.W. Griffith’s Intolerance (1916), which as I recall was primarily concerned with the fall of Babylon and had little interest in what Cyrus did with the city afterwards; and William Castle’s Slaves of Babylon (1953), which I have never seen.

Beyond that, the IMDb also claims that an actor played Cyrus in the documentary Beyond the Gates of Splendor (2002), which I have seen, but I can’t remember anything in the film that would have necessitated casting an actor as this particular historical figure. Then again, it has been six years since I saw that film.

And that’s about as much as I have been able to find.

My friend Matt Page does mention Cyrus once at his Bible Films Blog, but not in connection with any particular film. And the Wikipedia entry on Cyrus the Great is full of information about the man himself, but surprisingly says nothing, as far as I can tell, about his representation in popular culture.

So, are there any other examples? Anything that I or my sources are missing?

October 25, 2013
Antonia Bird's Priest and my early days as a film critic
Next Post

October 29, 2013 How do you promote a Bible epic when you're not religious?
Recent Comments
3 Comments | Leave a Comment
"I have neither noticed that much. I recenty read a leadership book inspired from Cyrus ..."
Hamid Mortazavi Cyrus the Great — a Persian ..."
""AD" stands for "Anno Domini", a Latin expression meaning "In the Year of Our Lord".So ..."
Peter T Chattaway The Chosen — season one, episode ..."
"Why does it say at the start of episode 3 that it takes place 26 ..."
Desiree Chamberlain The Chosen — season one, episode ..."
"What about Hellboy, The Grudge, Ghoulies, and Anaconda?"
45th Spiderbob Group VGCP When R-rated franchises go PG-13 …
Browse Our Archives
get the latest updates from
FilmChat
and the Patheos
Entertainment
Channel
POPULAR AT PATHEOS Entertainment
1