Noah news round-up: complete soundtrack listing, the Berlin premiere, the meaning of the story, and more 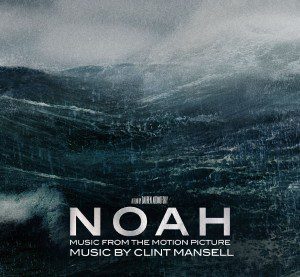 After having its world premiere in Mexico City last Monday, Darren Aronofsky’s Noah went to Berlin for its European premiere last night. You can see photos from the premiere here, a two-minute video with soundbites from Emma Watson, Douglas Booth and Darren Aronofsky on the red carpet here, and a 17-minute live chat featuring Watson, Booth and Logan Lerman here.

In the latter video, one of the questions that comes up, around the 2-minute mark, is what motivated the actors to work on the film, and whether they are “religious”; the only actor who answers the latter question is Booth, who identifies as agnostic.

In other news, the BBC reports that Pakistan and Tunisia may join the other mostly Muslim territories that have already banned the film for religious reasons. A theatre in the Palestinian West Bank hopes to be able to show the film, however.

Sarah Pulliam Bailey of the Religion News Service has written a story in which she speaks to a few people about the meaning and appeal of the Noah story:

So what makes the simple story of Noah so popular? Joseph Blenkinsopp, a professor emeritus at the University of Notre Dame who has studied Noah, thinks it’s because more people are aware of global disasters.

“For Jews and Christians, and possibly Muslims, it’s a sign of judgment, that judgment is real and there will be judgment,” Blenkinsopp said. “The flood story was a symbolic representation of that judgment.”

The story of Noah also resonates with people looking for a second chance, said Rabbi Scott Perlo of Washington’s Sixth & I Historic Synagogue.

“There’s a desire in each of us to have the past wiped away and to let things come back to a place where they’re completely clean,” he said. “But there’s also a fear because it could mean our own destruction.”

In Judaism, the story of Noah generated the 7 Laws of Noah, laws for basic human morality that non-Jews were bound to observe, such as prohibiting murder or theft. (There’s even a small religious sect, the Noahides, who follow the laws.)

“The Noah story is the birth of the idea of universal morality, that everyone should be moral,” Perlo said. “Noah’s ark is about how goodness survives, even after things go bad, good things can come again.”

Robert Gregg, a religious studies professor at Stanford University, has studied how different faiths tell the same story. In the Quran, he said, the emphasis is less on the ark and the animals and more on Noah’s relationship to the people who didn’t believe him that a flood was coming.

For Christians, the story of Noah is often used as a story that ultimately points to the story of Jesus, according to Carol Kaminski, an Old Testament professor at Gordon-Conwell Seminary whose research focuses on Noah.

She argues that Noah isn’t saved by his own goodness or obedience but rather God’s divine favor and grace.

“It’s not about the good people inside the ark and the bad people outside of it. It’s not about God starting afresh, since he keeps the world going with the same people,” Kaminski said.

“It is a story of judgment against sin and a plan of redemption, and grace frames the narrative.” 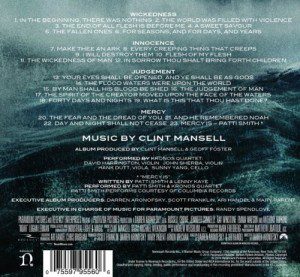 Finally, we have a full track listing for the Noah soundtrack album, which comes out March 25. Most, if not all, of the track titles are taken from the Bible and use a King James English that is not used in the film — ‘Make Thee an Ark’, ‘What Is This That Thou Hast Done?’ and so on — and they are divided into four sections headlined ‘Wickedness’, ‘Innocence’, ‘Judgement’ and ‘Mercy’.

Wickedness
1. In the Beginning, There Was Nothing
2. The World Was Filled with Violence
3. The End of All Flesh Is Before Me
4. A Sweet Savour
5. The Fallen Ones
6. For Seasons, and For Days, and Years

Innocence
7. Make Thee an Ark
8. Every Creeping Thing that Creeps
9. I Will Destroy Them
10. Flesh of My Flesh
11. The Wickedness of Man
12. In Sorrow Thou Shalt Bring Forth Children

Judgement
13. Your Eyes Shall Be Opened, and Ye Shall Be as Gods
14. The Flood Waters Were Upon the World
15. By Man Shall His Blood Be Shed
16. The Judgement of Man
17. The Spirit of the Creator Moved Upon the Face of the Waters
18. Forty Days and Nights
19. What Is This That Thou Hast Done?

For more information on Patti Smith’s involvement with the film, click here.

March 15, 2014 More shots of Noah's children in a TV spot from Peru
Recent Comments
0 | Leave a Comment
"What a strange article. Using movies as your basis to defend that Lazarus was murdered ..."
Mark Ross DeFazio The death, resurrection, and second death ..."
"Another with Ethiopian eunuch and Philip https://archive.org/details..."
Jason McKahan Watch: Philip is the original vanishing ..."
"I found Hanky Panky a pretty cool 80s movie when I first saw it on ..."
UniblabBR Sidney Poitier marathon: Hanky Panky (1982) ..."
"In 1972, yes. The movie was made in 1956 but the ratings system didn't exist ..."
Peter T Chattaway One of the reasons I do ..."
Browse Our Archives
get the latest from
FilmChat
Sign up for our newsletter
POPULAR AT PATHEOS Entertainment
1